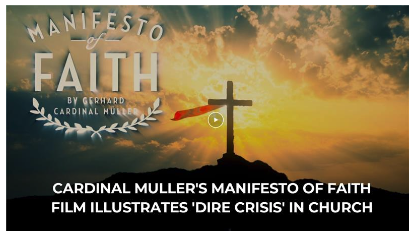 October 3, 2019 (LifeSiteNews) — “Manifesto of Faith: The Movie” has been released by Arcadia Films. This beautifully illustrated movie is a 22-minute cinematic presentation on Cardinal Gerhard Müller’s February 2019 manifesto of faith, which he wrote in order to combat what he called “growing confusion about the doctrine of the Faith” in the Church.

Watch the film for free by clicking here. You will be re-directed to the Arcadia Films website.

Cardinal Müller was the former Prefect of the Congregation for the Doctrine of the Faith. He served from 2012 until 2017, when he was dismissed by Pope Francis for being too faithful to the Church's doctrines.

This film is, simply put, a must-watch. It comes not in the midst of rosey times for the Church, but in the midst of the most severe crisis of faith inside the Church in her 2,000 year history. It stunningly presents the events surrounding Cardinal Müller's decision and the crisis in the Church.

I asked some friends of mine to comment on the movie in this Special Edition of The John-Henry Westen Show.

Michael Voris of Church Militant said it is “well worth watching” and that we are living in a time of “catastrophe in the Church.” Voris also said a “nightmare scenario” is unfolding under Pope Francis, as traditon-minded members of the hierarchy like Cardinal Müller are being “sidelined.” Voris believes that the Francis papacy “focuses more on concerns of the natural world as opposed to the supernatural.”

Elizabeth Yore is an international human rights and child protection attorney. She said the film is an “inspiring testimony” that is “beautifully presented.” It is a “stunning visual for our faith.” Catholics need to “watch it on your knees in prayer.”

Guillaume de Thieulloy, head of the popular Catholic French publication, La Salon Beige, said he is “greatful” for Cardinal Müller’s defense of Church teaching. I have “admiration” for him “telling the truth” in these “times of confusion,” Guillaume told me. “The truth is no longer promoted and defended by those who are supposed to promote it, especially the pope.”

Stephen Payne, the film’s director, has previously said he is “delighted to have had the opportunity to create this new cinematic presentation of Gerhard Cardinal Müller’s magnificent text.”

“In a time of proliferating confusion about the eternal truths of the Catholic faith, which today reaches to the highest levels, its clarity is much needed,” he added.

Watch this amazing film about Cardinal Müller for free by clicking here.