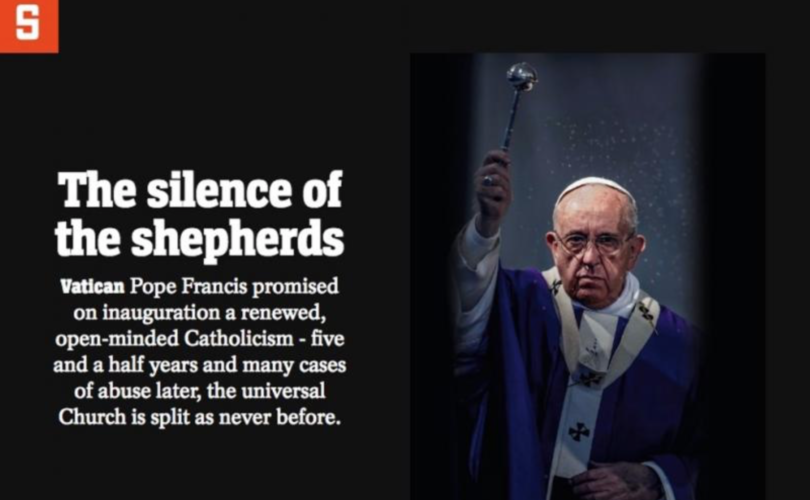 September 22, 2018 (LifeSiteNews) – Today, the German magazine Der Spiegel, one of the most influential political magazines in Europe, published a report on the failures of the papacy of Francis. LifeSiteNews already summed up the parts of this report about the involvement of Pope Francis in a cover-up of abuse cases in Argentina. But the Spiegel authors also make a report from their conversations with unnamed prelates in the Vatican who spoke quite critically about Pope Francis.

According to the magazine, one cardinal not only called the Pope effectively a liar, but he also said: “From the beginning, I did not believe one word of his.” The Spiegel's own comments on this papacy, as we shall see, are no less strong.

One of the high-ranking interlocutors told the journalistic team that, in the Vatican there reigns “a climate of fear and of uncertainty.” “Francis is very good at getting things in motion,” a German prelate is quoted as saying, “but when, in the end, there is only wavering, that for sure does not help.” Examples of such waverings are to be found, as the Spiegel says, in Pope Francis' handling of the debate about Communion for Protestant spouses of Catholics. One German cardinal tells the magazine about lies, intrigues, “and a Holy Father who, unlike anyone before him, puts into doubt the truth of the Faith.”

Marie Collins, herself a prominent abuse victim and advocate for victims, speaks about the Pope's and the Vatican's handling of abuse cases thus: “beautiful words in the public and [then] opposite actions behind closed doors.”

The Spiegel comments that the Pope might very well ignore the “indications of crimes within his own inner circle” because “he is interested, for reasons of power politics, in keeping one or another cardinal or bishop in his office.” So, in the German magazine's eyes, “Francis [thereby] makes himself vulnerable.” He fights for years “against global capitalism, but took – like his predecessors – sums of millions from the now-rejected Cardinal McCarrick which he himself had received from donors.” Additionally, “the Pope praises the value of the traditional family, but then surrounds himself with counselors and collaborators who live the opposite – in a more or less obvious concubinage with representatives of either sex.”

“Is the Pope still master of the situation?” asks the Spiegel. It points out that “criticism [of this papacy] meanwhile comes from a circle much larger than that of globally connected arch-conservatives.” One of the problems of this Pope, according to the magazine, is that “he is silent in delicate matters” such as the dubia of the four cardinals concerning his post-apostolic exhortation Amoris Laetitia, but also concerning the petition of 30,000 women who have recently requested that he answer the questions arising from the Viganò report. He does not answer these women, he is mute, and “he, rather, leaves the accusation unchallenged that he has known, since June 2013, about the doings of the child-abuser McCarrick.”

When speaking about one of the Pope's close collaborators, Cardinal Reinhard Marx, and his own Archdiocese of Munich, the Spiegel points to the crisis of Faith in Bavaria. “A part of the problem in the Archdiocese, however, is homemade,” it explains. The credibility of the Church there, it adds, is being undermined by the facts that “a high-ranking clergyman of Munich shamelessly places his concubine right in the first pew, and that also in this city, there is indignation about openly homosexual pastors and about an unpredictable Pope.”

“From the beginning, I did not believe one word of his.” These are the trenchant words of a cardinal within the walls of the Vatican: “He preaches mercy, but is in truth an icecold, sly Machiavellian, and, what is worse – he lies.”