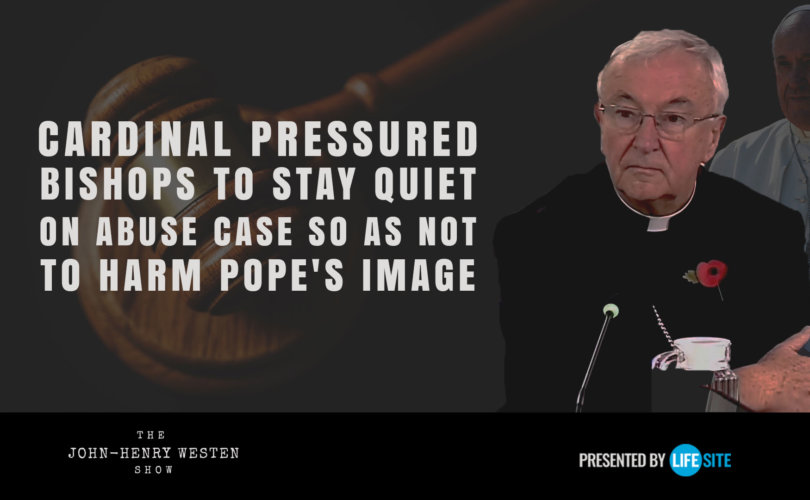 November 12, 2019 (LifeSiteNews) — Today is a very special episode of the John-Henry Westen Show. We have documents and testimony directly from two Bishops and a Cardinal admitting to refusing to issue a public statement supporting a clergy sexual abuse victim for fear of tarnishing the reputation of Pope Francis.

Recent hearings at the UK government-established Independent Inquiry into Child Sexual Abuse (IICSA) has elicited testimony from two bishops replete with incriminating evidence on Cardinal Vincent Nichols, the Archbishop of Westminster and President of the Catholic Bishops' Conference of England and Wales. Nichols was made a Cardinal by Pope Francis in 2014.

Both Portsmouth Bishop Philip Egan and Northhampton Bishop Peter Doyle testify that Cardinal Nichols cajoled them into refusing to issue a statement in support of a known victim of sexual abuse who was being disparaged in Catholic media as non-credible and her claims as “fantastical.” Cardinal Nichols, the bishops testify, warned that any public statement issued by the bishops in support of the abuse victim would be used to bolster attacks on Pope Francis.

Both Bishops Egan and Doyle testify that communications directors from the Bishops’ Conference, of which Nichols is President, advised them against any public statement in favor of the victim as it would lead to an attack on the Pope. Both also testify, under oath, that Cardinal Nichols himself had later intervened to confirm these fears of his Conference’s PR agents, and that it was the Cardinal’s intervention that convinced both bishops not to act for the abuse victim. In an email Bishop Doyle sent to the victim, subpoenaed by the inquiry, the bishop explained why he was now refusing to honor the victim’s request that a public statement be issued asserting her credibility. Bishop Egan also stated that, “I saw it as an attempt to discredit the Holy Father, actually, because it was so connected at that time with the Viganò affair.”

However, when Cardinal Nichols himself took the stand (watch here) he vehemently rejected the assertion that his primary concern was trying to protect the reputation of the Pope and suggests rather that his overriding concern was for the victim. But the Cardinal’s own testimony is not only contradicted by the other two bishops who took the stand but also by a woman who worked in the Portsmouth diocese as an advocate for abuse victims – a position called a safeguarding commissioner. Watch her testimony here.

What are Cardinal Nichols and the two bishops trying to conceal about Pope Francis? What is it that has them so concerned about an attack on Pope Francis that they’d be willing to refuse to assist a clergy sexual abuse victim? Remember the leaked reports that early in Pope Francis’ reign he personally halted a Vatican investigation into sexual abuse perpetrated by a Cardinal? That Cardinal was none other than Cormac Murphy O’Connor who by all accounts was very instrumental in electing Pope Francis. He is the same Cardinal who this victim alleges abused her. O'Connor was, incidentally, Nichols' predecessor.

Pope Francis’ blocking of that investigation was confirmed to me by Cardinal Gerhard Müller in October 2018 at a Napa conference in Washington, D.C. The conclusion of this entire sad tale is this: This abuse victim made her request for a hearing into these new allegations of abuse by Cardinal Cormac Murphy O’Connor in 2009, a decade ago. Despite Cardinal Nichols’ testimony that it was investigated, the other two bishops disagree and sent a joint letter to the Cardinal asking him to reopen her case.

In his sworn testimony, Cardinal Nichols claims that the Congregation for the Doctrine of Faith had closed the case of this abuse victim in 2011, thus implying that the Pope did not stop it in 2013. However the other two bishops ask him to reopen the case. “I was going to ask Cardinal Vincent,” says Egan in his testimony, “if he would re-open and re-examine this case and see what could be done to help the person concerned.” Bishops Egan and Doyle wrote a joint letter on Egan’s letterhead to Nichols on May 1, 2019. Egan testified that Cardinal Nichols didn’t even respond to the letter.

And finally in the interests of full disclosure I should tell you that LifeSiteNews is brought up several times in this hearing. Remember LifeSiteNews was used by Nichols and the PR folks as the threat to the bishops that should they speak in defense of the abuse victim her case would surely be used to attack Pope Francis.