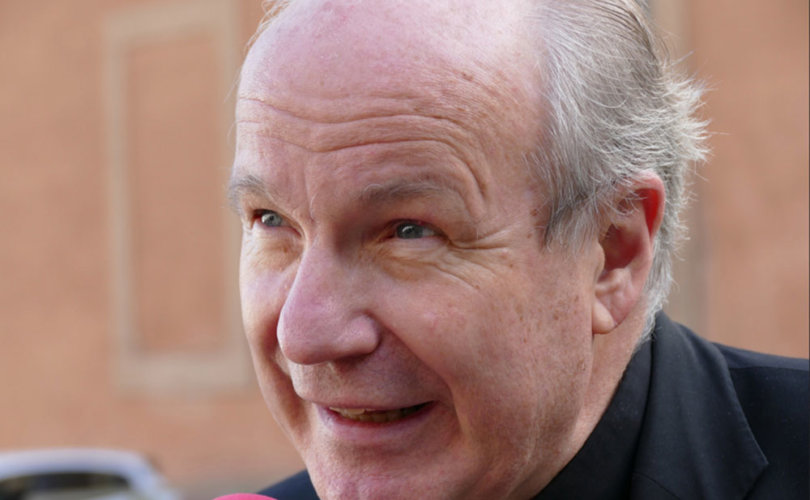 September 19, 2018 (LifeSiteNews) – Austrian Cardinal Christoph Schönborn “blessed” a homosexual couple while visiting their home for lunch, a homosexual activist and personal friend of the Cardinal is claiming in a new video.

Gery Keszler, a prominent Austrian homosexual activist, described at a recent public event how Cardinal Schönborn came to visit him and his friend for lunch and how he “suddenly,” after praying grace, turned to him and his homosexual partner and “blessed” them.

“That was enormous for me,” Keszler said, adding that he was “very happy” about the Cardinal’s “blessing” of his partnership.

Keszler said he realized that this revelation is “a bit of a forced outing” of Schönborn. “But since he did it, he will likely agree that I may talk about it,” he added.

Cardinal Schönborn is now distancing himself from Keszler's claim. Schönborn's spokesman Dr. Michael Prueller told LifeSiteNews that after grace, the Cardinal asked a “blessing to the hosts.”

“It is nonsense to make out of this [gesture] a precedent,” said Prueller.

Gloria.tv. reported that on 4 September Gery Keszler participated at a panel discussion in Feldkirch, Austria, together with the progressive Feldkirch Bishop Benno Elbs (part one here, part two here). During that discussion, Keszler – who is the organizer of the “pro-LGBT gala” called “Life Ball” in Vienna at which Cardinal Schönborn himself has also participated – describes his friendship with the cardinal of Vienna. He once met a Mr. Köcher, “a friend of  Schönborn,” with whom he talked at some length and who then initiated a meeting between Keszler and the Cardinal. “We then had a meeting, a supper, in the family circle of the confidant of the cardinal,” he explains. “We see each other regularly.”

On one of these occasions this year, Cardinal Schönborn, together with his “confidant,” as Keszler puts it, came to visit Keszler at “my weekend home in the South Burgenland, on the Feast of Our Lady's Assumption [15 August 2018], and he came for lunch with our circle. And he then says grace, and suddenly he blesses my friend and me. That was enormous for me.” Keszler adds that he “feels very happy that he did that.”

Keszler continues, saying: “His confidant had brought a bottle of champagne, and he loosened the cork, and after this blessing, this cork bursts into the air, comes thundering down, and breaks his plate – my most expensive Meissen plate!” He adds that later, his friend and he wondered whether this was not perhaps a “thunder coming out from heaven,” or whether this meant “shards bring good fortune.” “This was no little bit of a forced outing for the cardinal,” Keszler says, “but since he has done it, he probably will also be fine with me saying it.”

Last year, on 1 December, Cardinal Schönborn had hosted at his own St. Stephen's Cathedral a prayer service for World AIDS Day. At that gathering, Conchita Wurst, an internationally known transsexual singer and homosexual activist, also came up into the sanctuary to speak some words. This event was co-hosted by Gery Keszler himself, whom the cardinal received in person at the Cathedral’s entrance for the beginning of the professedly non-denominational event. Cardinal Schönborn was then to mention Keszler during his opening speech, along with “all those who are responsible for the Life Ball,” which is an AIDS fundraiser.

When, at the beginning of 2018, Cardinal Reinhard Marx and Bishop Franz-Josef Bode had aired the idea of blessing homosexual couples, there came a strong indignation from faithful Catholic prelates. Cardinal Gerhard Müller – the former head of the Congregation for the Doctrine of the Faith – called such blessings “an atrocity.” He said in February of 2018: “If a priest blesses a homosexual couple, then this is an atrocity at a holy site, namely, to approve of something that God does not approve of.” Schönborn at the time expressed indignation over one bishop who opposed the notion of blessings for homosexual unions.

As the Dutch psychologist Dr. Gerard van den Aardweg recently pointed out, there are still parts of that teaching as written down under Cardinal Schönborn's supervision, that leave some questions open. Van den Aardweg refers here to the claim that “Its [homosexuality's] psychological genesis remains largely unexplained.” “Is this meant to support the myth of biology?” the psychologist asks. He then further comments, as follows: “Really troubling are the statements on homosexuality in Nrs. 2357 and 2358 of the Catechism of the Catholic Church of 1992. They create the false impression of homosexuality as a complex, profound mystery of nature, which view is one of the trump-cards of the gay normalizers.” “Another dubious statement,” the scholar adds, “speaks of the 'not negligible number of men and women [with] profound homosexual tendencies.'”

The scholar concludes that “In truth, all non-morality statements on homosexuality must be removed from the Catechism. Like in the parable, they are weeds, sowed among the wheat of sound doctrine when some people were asleep.”

Now, in light of this Keszler report and consequent “outing” of Cardinal Schönborn, one might understand a little better some of the ambiguous flaws of the Catechism as it has been written down and promulgated under the supervision of this Austrian cardinal.

Update: After this article was published, Dr. Prueller once more contacted LifeSiteNews and asked that it be stated that there was only one blessing, which included both grace and the blessing of the host. Prueller said he contacted Mr. Keszler whom, he said, now says there was only one prayer. Prueller has not yet responded to LifeSiteNews' request as to whether Mr. Keszler now retracts his statement at the September panel discussion about the Cardinal blessing his homosexual relationship.