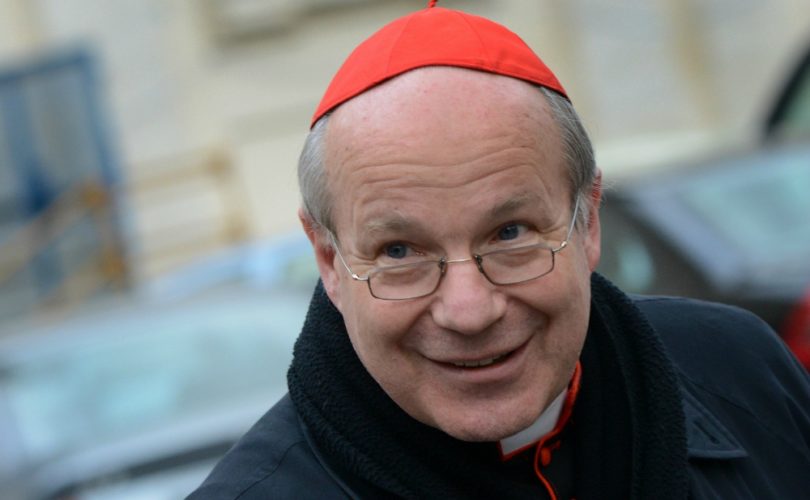 February 5, 2019 (LifeSiteNews) – In a new interview, Vienna Cardinal Christoph Schönborn says that he is “moved” by the yearning of homosexual couples for marriage. He also admits that “I often ask God” whether celibacy matters that much to Jesus. Additionally, he admits that in the 1960s, “my heart was beating on the left.”

Speaking on January 31 with the German magazine stern, Cardinal Schönborn makes it clear that the Catholic Church is tolerantly accepting that the state is allowing homosexual couples to enter civil “marriages.”

“To be honest, we have accepted it already for a long time,” he explains. But he requests that “we define it differently and that we raise our voice when we believe that this path for the whole of society is not good.”

“We may enter into the discussion, too,” the Austrian prelate states.

When asked what he says to homosexual couples who wish to promise each other loyalty, Cardinal Schönborn responds: “I personally am moved that, at a time where marriage is losing its attraction, those couples who feel and live out a same-sex attraction yearn to have thus the highest form of partnership.” In his eyes, these couples thereby give “witness that marriage is an important good.”

Cardinal Schönborn also tells his interviewer that he doubted the Faith many times during the “difficult years between 1965 and 1968” when in Germany “everything went topsy-turvy.”

When asked whether Jesus really puts so much importance on celibacy, Schönborn responds: “I often ask Him that.”

“I do not receive a clear answer,” Schönborn says. “But Jesus says very clearly: ‘Do not be afraid!’ In his speeches, he stressed that one should not place traditions higher than His crucial sentence: ‘Love your neighbor as yourself.’”

The Austrian prelate adds, “as long as traditions are more important than the joy of the Gospels, He would say that we do not have the right balance.”

Speaking about the clerical sex abuse crisis and the upcoming February abuse summit in Rome, Cardinal Schönborn admits past mistakes and insists that now the “most important thing is to develop a consciousness,” to “start processes,” and to “find a path together.”

“One may not expect miracles now,” he says. The prelate, speaking about Pope Francis, says that this abuse crisis now “is, without doubt, the greatest challenge for him and for the whole Church.” It would be a bad message – against the glad tidings of the Gospels – “if this [scandal] is not being cleared up and addressed.”

In recent months, Cardinal Schönborn has come under pressure after it came to light that, for more than 10 years, he knew about financial misconduct and episcopal moral problems in the Diocese of Gurk-Klagenfurt.

Schönborn is now being accused of having helped cover up these misdeeds of his friend and fellow bishop, whom he still praised highly as of July 2018.

There is currently an Apostolic Visitation taking place in Klagenfurt in order to examine the state of the diocese.

Additionally, at the end of 2018, Cardinal Schönborn received international criticism for hosting a rock concert in his cathedral in Vienna. During that concert, a prominent actor sang shirtless while standing on the Communion rail.

In August 2018, Schönborn explained that he could imagine future female priests and bishops, and in October 2018, the Austrian prelate claimed, “I may one day also ordain women to the diaconate.”