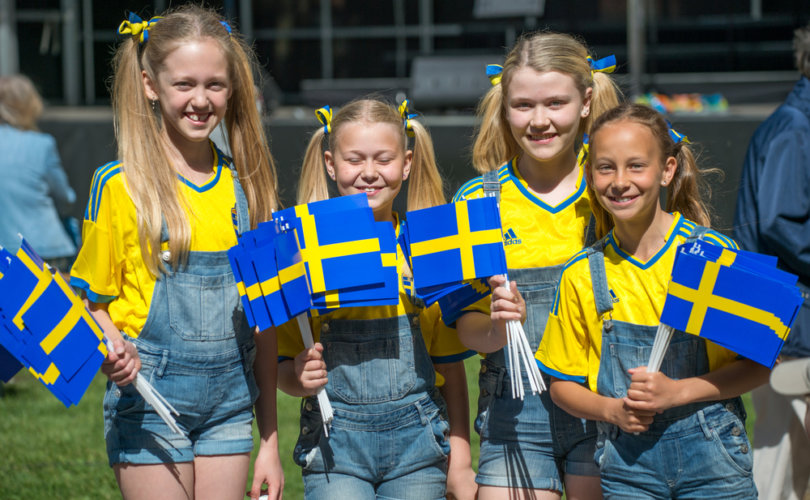 February 28, 2020 (LifeSiteNews) – These numbers are just staggering: According to Sweden’s Board of Health and Welfare, there has been a 1,500% spike in diagnoses of gender dysphoria—girls believing they are boys—among teen girls between the ages of 13 and 17. According to the Guardian, this rise in numbers is a reflection of a shift in public opinion on transgenderism that has made many people more open to permitting young people to pursue “gender reassignment” surgery.

Critics say this spike has been enormously exacerbated by the fact that in 2018, under pressure from LGBT activists, Sweden’s government put forward a law that would eliminate the necessity for parental consent, reduce the minimum age for “sex change” surgeries from age 18 to age 15, and in some instances permit children even younger to transition. In response, some medical professionals—including one prestigious psychiatrist—warned that so-called gender reassignment surgery on children was, in essence, an experiment with unknown consequences.

Sweden is not the only country witnessing a sudden spike in children and teens—mostly girls—identifying as the opposite sex. The United Kingdom has seen a 4,000% rise in children wanting to “change” their sex in ten years, from 97 in 2008 to 2,510 in 2017-2018. The same phenomenon is occurring in Canada, the United States, and Australia. Some experts have already pointed out that transgenderism is functioning as a social contagion, but LGBT activists are insisting that there has always been thousands upon thousands of children born into the wrong bodies that must become lifelong medical patients and undergo endless hormone treatments and surgeries.

There has been at least some pushback in the Swedish media, with one TV documentary highlighting a man who regretting transitioning and focusing on Karolinska University hospital in Stockholm, which has been criticized for hastily “transitioning” minors, and has even performed double mastectomies on girls as young as 14. Additionally, the Guardian noted, tragic stories began to surface.

At the same time, Filter magazine profiled the case of Jennifer Ring, a 32-year-old trans woman who hanged herself four years after her surgery. An expert on psychosis who was shown her medical journal by her father, Avi Ring, was quoted as saying that she had shown clear signs of psychosis at the time she first sought treatment for gender dysphoria. Indeed, the first clinic she approached refused to treat her, citing signs of schizotypal symptoms and lack of a history of gender dysphoria. But the team at Karolinska went ahead. “Karolinska don't stop anyone; virtually 100% get sex reassignment,” says Ring.

In response to the backlash, the Swedish government has delayed legislation lowering the minimum age for “sex change” surgery and instead asked the Board of Health and Welfare to re-examine the data in light of recent criticisms. The Board’s report is scheduled for release on March 21, and in the meantime, the Swedish Agency for Health Technology Assessment was directed by the government to examine why so many teenage girls were suffering from gender dysphoria. Of the teen girls who reported gender dysphoria, 15.2% reported autism, 28.9% reported depression, 19.4% had ADHD, and 32.4% had some form of anxiety disorder.

To the Guardian’s credit, they noted that critics are now louder and more numerous, citing the experience of several de-transitioners and the opinions of a number of experts urging caution. For several years now, countries have rushed headlong into this sweeping social experiment at the behest of the LGBT movement, ignoring calls for pause, demonizing as “transphobic” anyone who attempted to criticize “sex changes” or hormone therapy for minors, and declaring that feminists and gay activists who also had concerns were also bigots. There is some indication that the scale of this experiment and the increasing number of voices offering an alternative—and often tragic—experience with the transgender movement is now forcing people to pause and consider the implications of what we are doing.

For the sake of thousands of teenage girls and boys who have been swept up in this social phenomenon, I certainly hope so.

Jonathon’s new podcast, The Van Maren Show, is dedicated to telling the stories of the pro-life and pro-family movement. In his latest episode, he interviews Bjorn Korf, an activist trying to fight “kidnapping” by government social services in Norway. The nightmarish stories he shares are heartbreaking, but can't be ignored.