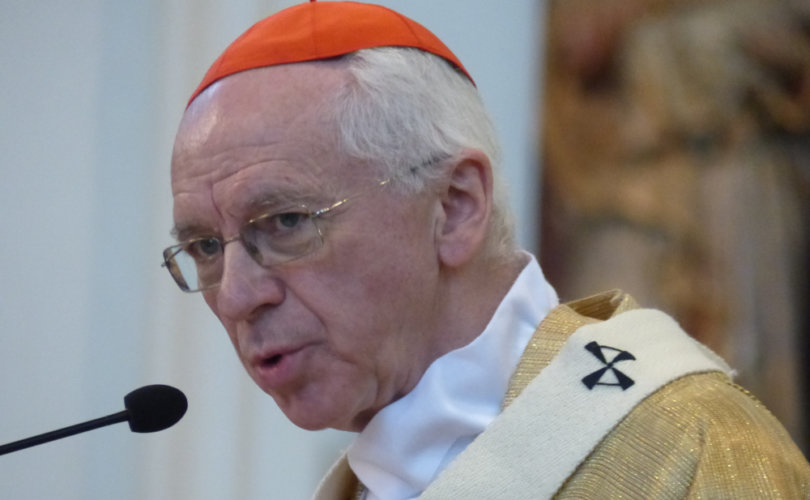 BRUSSELS (LifeSiteNews) — The Catholic bishops of Flanders, the Dutch-speaking part of Belgium, published a document this Tuesday in favor of “pastoral closeness to homosexual persons,” including suggestions for a public church blessing of same-sex couples. This is likely the first time ever, worldwide, that a group of bishops has officially green-lighted such a public ceremony of blessing for a homosexual union as such, in direct contradiction to last year’s ban of such “liturgies” by the Congregation for the Doctrine of the Faith.

The announcement of the initiative on the website of the Catholic Church in Belgium expressly refers to Pope Francis and Amoris Laetitia as the source of the bishops’ desire to “give a concrete response and fulfilment to the desire to give explicit attention in policy-making to the situation of homosexual persons, their parents and families.”

Cardinal Josef De Kesel of Brussels is officially named in the statement as one of its signatories; it was laconically endorsed by “the Flemish bishops.” This refers to the bishops of the dioceses of Antwerpen (Johan Bonny, known for his unorthodox declarations), Gent (Lode van Hecke), Hasselt (Patrick Hoogmartens), and Brugge (Lodewijk Aerts).

The document and suggestions for the procedure of the ceremony were published on the website of the Belgian Bishops’ conference, together with news that the Flemish bishops have set up a “contact point” named “Homosexuality and Faith” within the inter-diocesan service for pastoral care for families (Interdiocesane Dienst Gezinspastoraal van de Vlaamse katholieke Kerk, IDGP).

The said “contact point” has been placed under the authority of Willy Bombeek, the spokesman of the Catholic Education Service of Flanders from 1999 to 2017. A further statement on the bishops’ website notes that he “served as coordinator of the ‘Homosexuality & Faith’ working group since early 2021, with a mandate from the Flemish bishops. Between 2018 and 2022, he researched the place of Catholic LGBT+ and their parents within the Catholic Church.” The working group has now become a part of the Belgian Church institutions in its own right.

Bombeek called the initiative “ground-breaking.” In an interview with Flemish media outlet VRT on Tuesday morning, he said: “I myself am a believer and gay. That is why the bishops asked me to take up this assignment. I think it is important that the Church specifically wanted an LGBT believer in this post.”

He added that his main mission will be to “listen to questions from the LGBT community.” “What are their needs? We also need to listen to their stories. This is the first time the Flemish Church is sending the message to LGBT people that they are welcome as they are, and that they are okay as they are. We want to make it clear that we are a welcoming Church that does not exclude anyone. We may also have to listen to the pain experienced by faithful LGBT people in the past. Their parents are also welcome to contact us. Because no doubt they too have many questions and stories.”

Regarding the “blessing” for same-sex couples that the bishops’ document is openly promoting, Bombeek commented: “The Church felt there should be something for LGBTI people of faith alongside church marriage. Often, this was already happening at the local level, but people did not really know how, they did not have a proper form for it. Now the Church provides a kind of structure that can serve for such a blessing: a commitment to sustainability and fidelity that can be expressed within the Church. For many LGBT people, this is important: that they can celebrate their relationship within the Church, and that this relationship is blessed before God.”

The bishops’ document clarified that the blessing should not be mistaken for a church wedding. Bombeek explained: “After all, we are simply in a Church tradition where the word ‘marriage’ is restricted to the relationship between husband and wife. The blessing totally has the same value, but from Church tradition, they cannot call it marriage. Yet it is very groundbreaking that from within the Church we can have a prayer service and a blessing for LGBT relationships.”

Whether the blessing offered by the bishops of Flanders cannot be mistaken for a marriage ceremony remains to be seen. In their document, titled “Being pastorally close to homosexual persons: for a welcoming Church that excludes no-one,” the prayer-service created by the Belgian bishops is presented as being “clearly different” to sacramental marriage, but the way the ceremony is to be conducted leaves plenty of room for confusion:

For example, this prayer moment could proceed as follows.

God of love and faithfulness,

today we stand before You

surrounded by family and friends.

We thank You that we could find each other.

We want to be there for each other

in all circumstances of life.

that we want to work towards each other’s happiness

We pray: grant us strength

to be faithful to each other

and deepen our commitment.

In your nearness we trust,

from your Word we want to live,

given to each other for always.

we surround N. and N. with our prayers today.

You know their hearts and the path they will take together from now on.

Make their commitment to each other strong and faithful.

Let their home be filled with understanding,

Let there be room for reconciliation and peace.

and help them be of service in our community.

Give us the strength to walk with them,

together in the footsteps of your Son

and strengthened by your Spirit.

This is the blessing, not of persons being reminded of God’s love who are called to observe the commandments of the Church whatever their personal failings and weaknesses, but of self-proclaimed lovers who call on their “sexual orientation” in order to obtain official recognition of their sexual conduct that is objectively gravely sinful. It amounts, in fact, to calling mortal sin a reason for joy and “delight,” going so far as to thank God for the fact that the members of the same-sex couple have “found each other.”

— Article continues below Petition —
PETITION: We won't give any money to liberal bishops who attack the Faith
Show Petition Text
11566 have signed the petition.
Let's get to 12500!
Thank you for signing this petition!
Add your signature:
Show Petition Text

It is difficult to imagine a more disordered action on the part of priests of the Catholic Church, who would hereby encourage members of their flock to choose to offend God and who would “bless” behavior that cuts them from God’s grace and puts them at risk of eternal damnation. And bishops, and even a cardinal, are recommending this.

Will Pope Francis contradict the statement by the Flemish bishops that they “feel encouraged by the apostolic exhortation Amoris Laetitia” by which he called to “discernment, guidance, and integration?” They quote his words regarding “respect” for all people but do not discern between helping persons and supporting same-sex couples as such.

Instead they write: “The pastoral attention of the church community concerns first and foremost homosexual persons themselves. Along the sometimes complex path of acknowledging, accepting, and positively experiencing their orientation, we want to remain close to them. Some remain celibate. They deserve our appreciation and support. Others choose to live as a couple, in lasting and faithful union with a partner. They too deserve our appreciation and support. Because this relationship too, although not a church marriage, can be a source of peace and shared happiness for those involved.”

The bishops of Flanders insist on the value of individual conscience, which is also the starting point of Amoris Laetitia, writing:

This pastoral approach focuses on encounter and conversation. Believers who are in stable homosexual relationships also desire respect and appreciation within the faith community. It hurts when they feel they do not belong or are excluded. They want to be heard and acknowledged. That is what this pastoral approach is about: their story of uncertainty towards growing clarity and acceptance; their questions about church positions; their joy in knowing a stable partner; their choice to have an exclusive and lasting relationship; their determination to take responsibility for each other and their desire to be of service in church and society.

In this pastoral approach, there is room for spiritual discernment, for inner growth and for conscientious decisions. Pope Francis calls for people’s conscience to be valued and supported, even in life situations that do not fully live up to the objective ideal of marriage: ‘Conscience can also recognize with sincerity and honesty what for now is the most generous response which one can be given to God, and come to see with a certain moral security that it is what God himself is asking amid the concrete complexity of one’s limits, while yet not fully the objective ideal.’ (AL 303).

Willy Bombeek told VRT that the bishops of Flanders are “sending a signal to the whole world.” Catholics the world over should indeed pay attention, and pray for mercy in the face of this scandalous initiative.