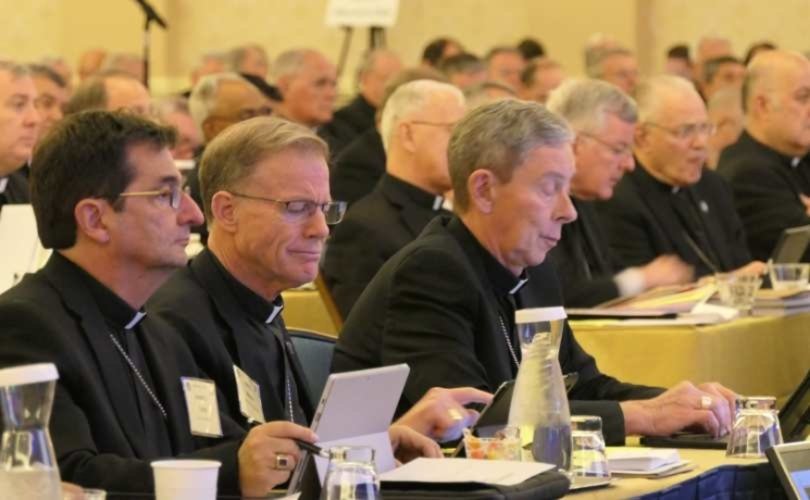 BALTIMORE, Maryland, November 15, 2017 (LifeSiteNews) – The U.S. bishops discussed the possibility of immigration being a moral rather than prudential issue Monday at their annual meeting, with one bishop suggesting that deportation could be a “sin that cries out to heaven” for vengeance and another saying “no legislation can be called intrinsically evil,” but our current immigration system could be.

“I hear sometimes on television from our own Catholics is that this (immigration) is a prudential judgment” and “we’re not talking about an intrinsic evil,” said Bishop Oscar Cantú of the Diocese of Las Cruces, New Mexico. Cantú was speaking during a question and answer session among the bishops following a presentation on immigration.

Cantú said these Catholics ask, “Cannot a Catholic in good conscience have a different judgment on the matter?”

“I’ve responded to that in some different ways,” he continued, wondering if any of his fellow bishops had suggestions on how to handle it.

Bishop Joe Vasquez of Austin, Texas, chairman of the U.S. Conference of Catholic Bishops' Committee on Migration, acknowledged, “Definitely, that’s a difficulty for us when we do speak to elected officials.”

Vasquez suggested the bishops draw attention to what Pope Francis has said about immigration and what “previous Holy Fathers have stated very clearly” regarding “what the Church understands by just reception of immigrants.”

“We can make America great, but you don’t make America great by making America mean,” he continued. “And comprehensive immigration reform is a just and reasonable and prudent way to move forward to improve the common good of everyone – Americans and those who wish to be Americans.”

Bishop Jaime Soto of Sacramento, California, went a bit farther than that, saying:

“I understand the questions – the issues around prudential judgment, but I would say deportations do, you know, do fall under a whole different category and uh – John Paul II has also spoken very clearly and called it one of the sins that cries out to heaven and that uh – that’s in his encyclical on Evangelium Vitae. …I wanted to look up the citation, but it’s a very strong statement about um, that not only [is it] consistent with, uh, Church teaching and with current statements but also is, in the Scriptures so strongly based that, you know, that to mistreat the stranger is a serious offense. So, in any case, I think there’s – there’s…to discard it just as a prudential judgment I think is not – doesn’t reflect our tradition, our moral tradition on how we are to respond to these cases.”

Perhaps some more distinctions from Bishop Soto would have been helpful to understand his point.

Archbishop Salvatore Cordileone of San Francisco made points similar to Wenski’s, saying while there is “certainly room for prudential judgment” on the issue of immigration, “it’s not something that can be taken likely.”

“If people wanna take a different position, they have to study this and consider seriously what we’ve been teaching and what we’ve been advocating, especially (with) an issue that involves such basic considerations of justice, one where we have a very developed body of teaching, in a nation which we’ve been very actively involved for a very long time,” he said.

Bishop McElroy: ‘On no issue can legislation be called intrinsically evil’

Bishop Robert McElroy of San Diego suggested that in Catholic moral theology, “on no issue can legislation be called intrinsically evil.”

This is because “the concept of intrinsic evil cannot really apply to legislation” and only to “morally simple” actions, said McElroy.

“Now in Catholic moral theology, the concept of intrinsic evil cannot really apply to legislation. Because intrinsic evil only applies to actions [which are] morally simple. And so, uh, on no issue can legislation be called intrinsically evil. So in the narrow, technical sense nothing can. However, I would submit to you that in the human, and in the humane, and in the pastoral sense, when we have a situation where parents cannot send their child with cerebral palsy to the hospital without risking them being detained by the immigration authorities, we have a situation that is intrinsically evil.”

McElroy has said the Catechism of the Catholic Church uses “very destructive” language when it teaches that homosexual activity is “intrinsically disordered.”

‘It’s important not to forget Planned Parenthood’ is racist

The bishops then engaged in a lengthy discussion about racism in America. Bishop Felipe de Jesús Estévez of St. Augustine, Florida, commented that “the public radio and other media gave a lot of attention to” a recent event at the University of Florida promoting white supremacism.

Estévez noted that it’s often argued that the First Amendment protects those “who promote this culture of hate and division.”

“We need to reinforce the fact that evil does not have rights,” said Bishop William Murphy of Rockville Center, echoing a statement usually embraced by tradition-minded Catholics: “error has no rights.”

“If we let people say that evil is OK because ‘I have a right to say whatever I think,’ I think we’re letting people get away with something we cannot stand for,” concluded Murphy.

Archbishop Thomas Rodi of the Archdiocese of Mobile, Alabama, warned his fellow bishops not to dismiss the First Amendment’s free speech protections.

“Racist speech, as repugnant as we may find that – we have to be careful because ‘hate speech’ is something that we as bishops are often accused of in certain circles,” said Rodi. “And so the First Amendment is an important amendment that we as bishops need to be very careful in protecting.”

“I think in identifying racist organizations it’s important not to forget Planned Parenthood, which was founded by an avowed racist for eugenic purposes,” Bishop Peter Byrne, an Auxiliary Bishop of New York, incisively noted. “And it also obviously targets minority communities.”

It is certainly heartening to know that the U.S. bishops are so strongly opposed to racism, and that at least one recognizes the racism that the abortion industry perpetuates.

What about the ‘poisoning rhetoric’ used against Catholics who defend Church teaching?

The conversations and presentations at the U.S. bishops’ meeting demonstrated that many shepherds of the Church are more than capable of using strong, unapologetic language when it comes to certain issues, like immigration.

But it seems many bishops would rather choose their words more carefully when it comes to the moral issues of life and human sexuality. Abortion has been reduced to an issue of “civility” and therefore “incivility,” rather than right or wrong.

Cardinal Cupich, what about all the “poisoning rhetoric” that “demonizes” people of faith who believe there are only two genders? And that subjecting kids to powerful hormone treatments is child abuse? And that marriage is the exclusive, lifelong, and life-producing union of one man and one woman?

Where have you been while the Catholic faithful have been subjected to hateful rhetoric labeling such beliefs “homophobic” and “transphobic”?

And after listening to Bishop Soto’s comments, one wonders: If deportation is a sin that cries out to heaven for vengeance, will the USCCB advocate as strongly against sodomy as it does in favor of immigration?