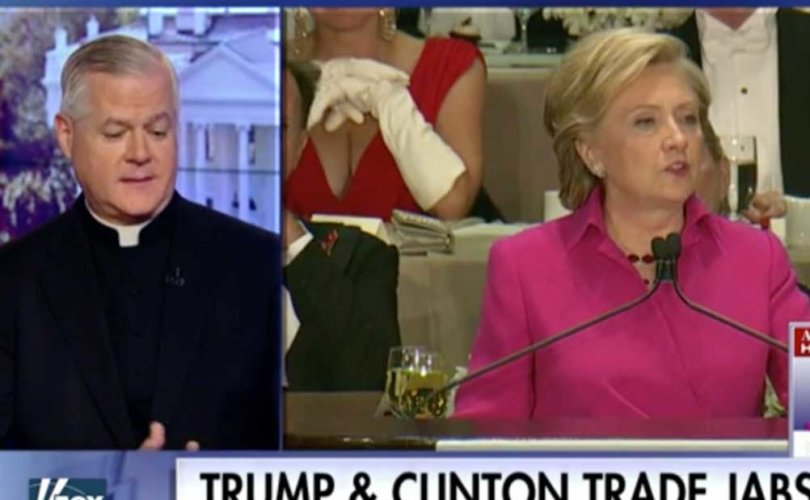 October 23, 2016 (LifeSiteNews) – Once again a leading opponent of Catholic moral teachings, this time Hillary Clinton, has cited Pope Francis to give credibility to her actions. In a Fox news interview, Fr. Gerald Murray gives clear reasons why some of Clinton's remarks at the Al Smith dinner were highly inappropriate and that she should have used the event to publicly disown the anti-Catholic bigotry in her staff emails revealed by Wikileaks.

Fr. Murray said, “there should have been a statement” by Mrs. Clinton “right at the start” of her remarks at the dinner, “saying, 'I disown everything that was read in those emails and I'm not going to try to defend them.'”

The prominent U.S. Catholic canon lawyer continued that he hoped Clinton would “turn around and say she cannot tolerate anti-Catholic bigotry in her campaign and at the same time as she last night quoted Pope Francis to defend her positions on ecology and the like. You can't have it both ways.”

After the interviewer noted Fr. Murray “took offense that she evoked Pope Francis at the end,” the Catholic priest responded,

“I got upset because the night before she defended partial-birth abortion and that this is just between a doctor and a woman. Wait a minute, what about the baby? Pope Francis defends the right to life…Don't try and pretend the pope is endorsing her in some way by quoting him selectively. It's not good. Partial-birth abortion is a horrendous crime. It should end…Her defense of it two nights ago really upset me, because we're talking about babies here.”

This improper citing of the current pope has become an unprecedented, on-going epidemic throughout the world, both within the Church by it seems evey moral dissident and outside the Church by numerous enemies of authentic Christian moral teachings, such as Elton John, UN leaders, Barack Obama and hundreds, if not thousands, more.

Thank God for faithful, straight-talking priests such as Fr. Murray who is a regular on EWTN, as well as on other media. This courageous canon lawyer consistently proclaims what ALL authentic Christian clergy should be proclaiming at this dangerous time in history.

Although it is finally beginning to change, the vast majority of priests, and especially bishops and cardinals, have seemed to be in hiding, hoping that their negligence will somehow not be noticed.

Clinton, and many other political and other leaders assaulting life, family and faith, must be strongly called out by Church leaders, as Fr. Murray and a growing number of other clergy are now doing.

The laity must demand that all clergy speak out NOW, provide desperately needed moral leadership and endure the criticsms from the world that will result.

That was the example that Jesus Christ gave of what he expects of them. This is especially true at this time when we may be facing imminent persecution for their having been silent, and even complicit in many cases, during the past decades of decline in the practice and belief of faith and resulting cultural collapse.