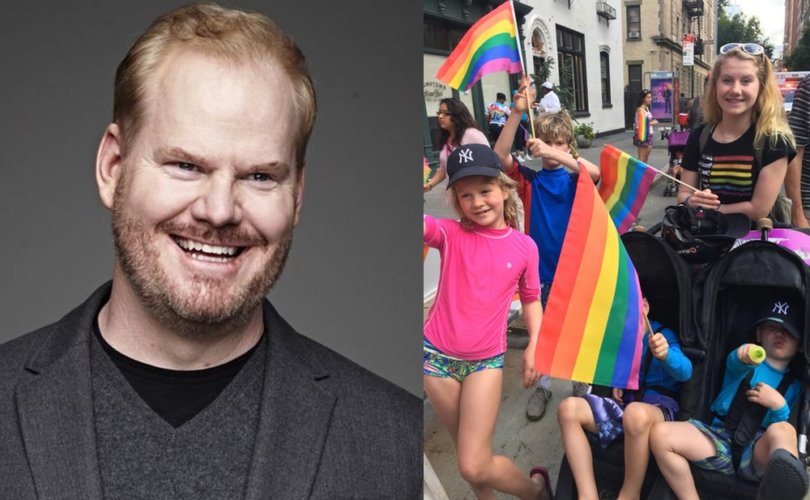 NEW YORK, June 26, 2017 (LifeSiteNews) — Faithful Catholics who love laughing at Jim Gaffigan will be disappointed to learn that the comedian, whose bag of jokes is often influenced by his Catholicism, allowed his kids to watch New York’s Gay Pride Parade over the weekend and tweeted out a picture of them waving rainbow flags.

Even Gaffigan's wife Jeannie used social media to showcase her family watching the homosexual parade go by. “Mom? Is everyone in New York City gay?” her kids asked her.

“They were at the sprinkler park in their bathing suits and the parade just marched by and handed out rainbow flags,” she posted on Instagram.

Gaffigan, a graduate of Jesuit-run Georgetown University, is often trotted out by the Catholic world as a comedian who “brings Catholicism to the masses” through his gift of humor. Best known for his family-friendly routines on bacon, McDonald’s fries, and bowling, Gaffigan will also get laughs for his jokes about being a Catholic parent with five kids. Gaffigan, who is 51, has often been praised by Catholics for his frank adherence to Catholic teaching against contraception.

The comedian has received accolades from Catholic News Agency, Aleteia, and National Catholic Register. When Pope Francis visited the U.S. in 2015, Gaffigan was honored as being the lone comedian in a warmup act prior to the Pope’s appearance at the Festival of Families.

But there is a side to Gaffigan’s Catholicism that does not square with Catholic teaching. And that’s his take on sexuality.

The Catholic Church teaches that God created humans as “male and female” and gave them to each other in marriage so they could “increase and multiply.” Sexual attraction and sexual acts between a male and female are specifically created by God for the purpose of procreation. The Catholic Church teaches that homosexual acts are “acts of grave depravity” and “intrinsically disordered” since they are “contrary to the natural law” in that they “close the sexual act to the gift of life.”

Since God did not make a mistake in creating humans as male and female for one another, the Church also teaches that same-sex attraction is “objectively disordered” since God created members of the opposite sex to be attracted to one another for the sake of procreation.

Based on the content of his shows, Gaffigan takes much more than a “who am I to judge” approach to homosexuality.

In a 2012 episode of the TV show Portlandia, Gaffigan plays “Donald” who kisses his gay business partner “Stu” of “Stue’s Stews” on the lips after the pair successfully sells their first bowl of hot food from a food cart. The front of the food cart consists of a giant image of two naked men in a hot tub filled with stew. In the image, Gaffigan is wearing a hat with the word “Oregon” in rainbow letters.

Then in 2015, Gaffigan and his wife Jeannie produced The Jim Gaffigan Show which highlights an active gay character, played by Michael Ian Black, whose attraction to and sexual involvement with other men is portrayed as normal and healthy. In the show, the gay character is constantly hitting on other men, often asking them out to lunch as he jokes about condoms and oral sex.

“I knew exactly what he [Black] would bring [into the show], and he did every time,” said Jim Gaffigan in a behind-the-scenes explanation on YouTube about the humor behind the gay character.

Gaffigan was praised not only by liberal Catholic media but even by homosexual media for his ‘inclusivity’ in the show.

“The viewer gets the impression the TV Gaffigans are too busy living out their faith to have a lot of judgmental opinions about other people’s behavior. No wonder the real-life Gaffigans were invited to Pope Francis’ United States visit this September,” wrote the U.S. Catholic in a 2015 piece about the show.

“Gaffigan takes on homophobia within the Catholic Church in an episode revolving around an antigay pizza chain. In this one storyline, Gaffigan’s overarching motifs of celebrity, religion, homosexuality, and his indefatigable love of food come crashing together,” wrote Out Smart Magazine in a July 2015 article on Gaffigan’s new show.

The U.S. Catholic praised the show as a “textbook example of the Jesuit charism for embodying the gospel’s values in the culture of our everyday world.”

Jim Gaffigan’s wife Jeannie explained in a 2016 interview with National Catholic Register that she thinks that both she and Jim can be good Catholics — on screen and off — without having to judge the actions of people.

“No one is finger-wagging at anyone. With the world we live in, what we do is we live our lives, and we’re open about what we do. We’re happy, and we have a lot of joy in our children and in our faith and in our marriage. We’re not turning around and telling everyone if you don’t live this way you’re bad. Be good, and the good will spread, rather than casting judgment on other people,” she said.

“The worst way to evangelize is to go into certain situations where you’re trying to push something down somebody’s throat,” she added.

While Jesus teaches that one can never judge someone’s motives or state-of-grace before God, he speaks clearly of judging between good and evil, between weeds and wheat, between good fruit and bad. “Do not judge by appearances, but judge with right judgement,” said Jesus, as related in the Gospel of John (Jn. 7:24).

LifeSiteNews reached out to Jim Gaffigan by phone and email, asking him if he thinks Catholic teaching on marriage and sexuality should change, but did not receive a response by press time.

Gay Pride parades, often touted as “family friendly,” are designed to flaunt homosexual behaviors. It is not uncommon to see participants engaging in mock-homosexual acts as they march along the parade route. Some participants can usually be seen engaging in mock acts of sadomasochism, wearing nothing but leather straps and other bondage gear. Participants perform hyper-sexualized dancing with twerking and grinding. Some groups of marchers go topless. Others are totally nude. Participants want everyone to accept their gay “marriages” and homosexual lifestyles.

The Catholic faith holds that homosexual acts, along with murdering the innocent, depriving a laborer of his wages, and oppressing the poor, are among the four sins that cry to heaven for justice. Those who commit grave sin can only enter heaven if they let go of their sinful ways, asking God for forgiveness and mercy. Jesus teaches that it is the “pure of heart” who will see God.

Last month Cardinal Carlo Caffarra told participants at the Rome Life Forum that homosexual “marriage” comes from the “culture of the lie” since it “denies entirely the truth of marriage” as it comes from the “mind of God the Creator.”

“The Divine Revelation has told us how God thinks of marriage: the lawful union of a man and woman, the source of life. In the mind of God, marriage has a permanent structure, based on the duality of the human mode of being: femininity and masculinity. Not two opposite poles, but the one with and for the other,” he said.

Caffarra said that Satan pushes the lie of homosexuality today in his attempt to destroy one of the main pillars of God’s creation, namely marriage. Satan does this, the Cardinal said, by constructing an “anti-creation” or “alternative creation” where God and every sign of his beauty and goodness have been erased.

“This is the ultimate and terrible challenge which Satan is hurling at God,” he said.