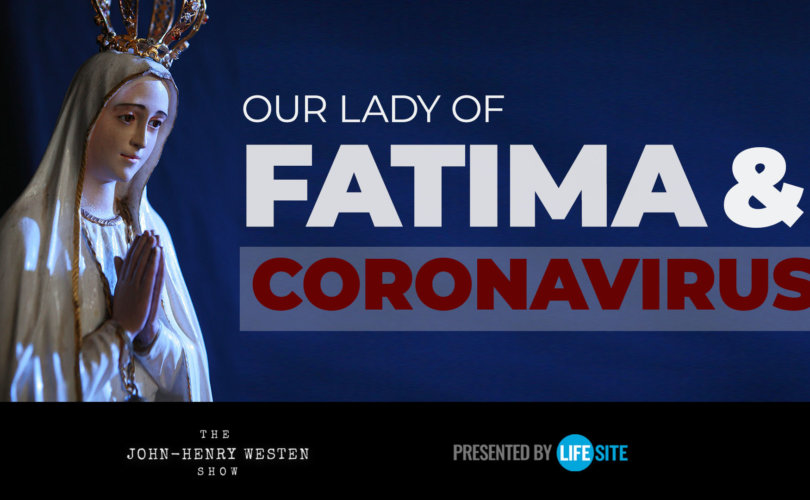 March 17, 2020 (LifeSiteNews) – The coronavirus is about to result in a world-wide lockdown. The rapid spread of the virus is unheard of in modern history and results from Italy are staggering. We must recognize this as a chastisement from God.

For the first time in Rome in hundreds of years there will be no celebration of Holy Week. That didn’t happen even during the two World Wars. Not, says Catholic historian Professor Roberto de Mattei, since perhaps when Napoleon invaded Rome at the end of the 18th century.

During a recent interview with LifeSite’s Maike Hickson, professor de Mattei praised the efforts of Italy’s response to the coronavirus while rebuking Great Britain for its approach.

“[Prime Minister] Boris Johnson's position seems to me based on eugenics and Darwinism and I am afraid that it will bring misfortunes to his country,” de Mattei said.

Professor de Mattei also advised Catholics to not forget the importance of keeping their spiritual life in order during this time, and to continue to receive Holy Communion when possible.

I myself find that what priests in Italy are doing to be very interesting. For one, they are saying more masses and restricting admittance to under 50 or so parishioners at each one, allowing for much distance between participants. Moreover, the priests are administering Holy Communion to one Catholic at a time while making sure they are six feet from another. The priest also purifies his fingers in a solution of water and alcohol before administering Holy Communion to the next Catholic.

There are other innovative solutions proposed by priests in the United States like outdoor masses and “drive-thru” confessions.

To understand the times in which we currently live we must understand the gravity of our anti-God world. There is more sin now than at any other time in history. Moreover, we have the most extreme heresies of all time accepted by a majority of Catholics and pushed by the Pope himself.

Be that as it may, we must have an outlook of joy rather than worry. Indeed, we have the hope of eternal salvation. The prospect of death is not terrifying. It is the only way of entrance into life eternal.

Professor de Mattei puts this current crisis in the context of the messages of Our Lady of Fatima, saying that this is the moment “to remember the message of Fatima, because the divine punishments, which have already been affecting the Church for many years, are making themselves visible to the whole society.”

Recall that Our Lady of Fatima spoke about how God is going to punish the world for its crimes by way of war, famine, and persecutions of the Church and of the Holy Father. She also spoke about how she wanted Russia to be consecrated to her Immaculate Heart.

But then, the third part of the Fatima secret, released in 2000, stated the following:

We saw an Angel with a flaming sword in his left hand; flashing, it gave out flames that looked as though they would set the world on fire; but they died out in contact with the splendour that Our Lady radiated towards him from her right hand: pointing to the earth with his right hand, the Angel cried out in a loud voice: ‘Penance, Penance, Penance!'. And we saw in an immense light that is God: ‘something similar to how people appear in a mirror when they pass in front of it' a Bishop dressed in White ‘we had the impression that it was the Holy Father'. Other Bishops, Priests, men and women Religious going up a steep mountain, at the top of which there was a big Cross of rough-hewn trunks as of a cork-tree with the bark; before reaching there the Holy Father passed through a big city half in ruins and half trembling with halting step, afflicted with pain and sorrow, he prayed for the souls of the corpses he met on his way;

Angels are the executors of divine punishments on people, as the dramatic vision of the Third Secret of Fatima reminds us.  The Black Death ended with a miraculous intervention of Our Lady via an image of Her painted by St. Luke the Evangelist. As the plague ended, Pope Gregory witnessed angels singing the Regina Caeli and St. Michael the Archangel atop what is now Castel Sant'Angelo sheath a bloody sword.

Despite living in one of the hardest hit countries suffering from coronavirus, professor de Mattei remains hopeful. He tells us to remind one another that everything that happens is “for the triumph of the Church” and that “the closer the punishment is, the closer will be the triumph of the Immaculate Heart of Mary that Our Lady has promised us.”

The solution to all this suffering is Our Lady of Fatima. This is not a battle against flesh and blood but principalities and powers. It is waged first in our own hearts. The formula for success is the following: daily mass where possible, five first Saturdays, three Hail Mary’s, rosary, confession, consecration to Our Lady of ourselves and our families, wearing the scapular, and the intercession of the saints and guardian angels.

“In the end, my Immaculate Heart will triumph” Our Lady promised. “The Holy Father will consecrate Russia to me, and she shall be converted, and a period of peace will be granted to the world.”

Let’s renew our own consecration to Mary this March 25 – the feast of Her Annunciation where she became the living tabernacle of God, the Ark of the New Covenant. And with that we can say with great confidence to the Eternal Father, “behold not me, but behold the handmaid of the Lord.”