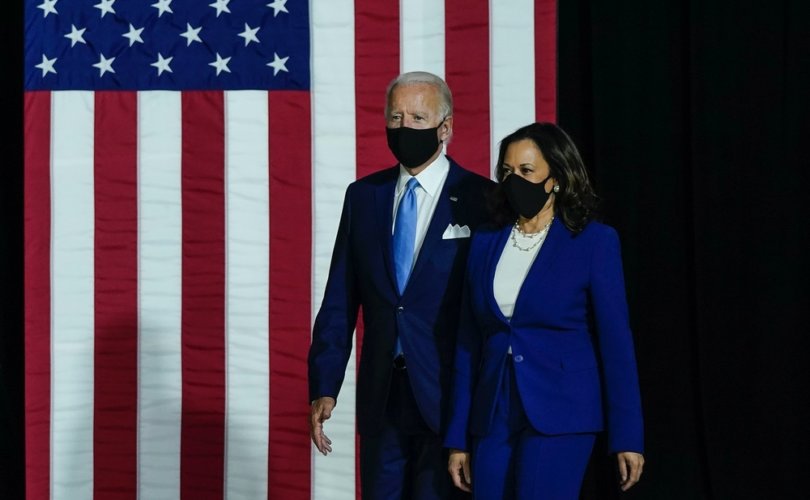 August 14, 2020 (LifeSiteNews) – Set aside the question of Senator Kamala Harris’s likability. (She’s not, as her disgraceful treatment of Judge Brett Kavanaugh during his confirmation hearing for the Supreme Court conclusively proved.)

Ignore the fact that her voting record in the Senate, according to GovTrack.us, is to the left of socialist Bernie Sanders. (I did not think that this was even possible until I looked it up.)

Defer – for the moment – questions about her support for open borders, Medicare for All, the Green New Deal, free college, gun confiscation, and free abortion throughout all nine months of pregnancy. (I know this is difficult, but try.)

There is evidence that she is.

Brian Buescher, who is a practicing Roman Catholic, was nominated by President Trump to be a district judge in Nebraska. When he came before the Senate Judiciary Committee for his confirmation hearing at the end of 2018, Kamala Harris was ready for him. She sent him a list of questions the import of which was to suggest that he was unqualified to serve on the bench because of his membership in the Knights of Columbus. Here’s one of her winners:

Her other questions included, “Have you ever, in any way, assisted with or contributed to advocacy against women’s reproductive rights?” and “Were you aware that the Knights of Columbus opposed marriage equality [sic] when you joined the organization?”

Senator Harris, who may wind up being one heartbeat away from the presidency, was suggesting that Buescher’s involvement with a Catholic men’s group that has millions of members and has performed countless acts of charity over its century-long existence made him unqualified to sit on the bench.

Senator Mazie Hirono of Hawaii, Harris’ colleague on the Judiciary Committee, carried this line of questioning even further. She actually asked Buescher, “Do you intend to end your membership with this organization to avoid any appearance of bias?”

The implication, again, was that she could not, and would not, vote for anyone who was a member of the Knights of Columbus.

The above episode has been widely and properly remarked upon as an instance of anti-Catholic bigotry, including by Archbishop Charles Chaput. But what hasn’t received nearly as much attention as it should have is what followed.

Senator Ben Sasse, who is from Judge Buescher’s home state of Nebraska, stood up on the Senate floor and roundly condemned Harris’ effort to impose religious tests on federal officials as a violation of religious liberty. He then introduced Senate Resolution 19:

Expressing …. the sense of the Senate that disqualifying a nominee to federal office on the basis of membership in the Knights of Columbus violates Clause 3 of Article 6 of the Constitution of the United States which establishes that Senators shall be bound by oath or affirmation to support the Constitution and “no religious test shall ever be required as qualification to any office or public trust under the United States.”

Sasse’s Resolution – a direct rebuke of Kamala Harris’ anti-Catholic questioning of Judge Buescher – was passed on January 16, 2018 without amendment or debate by unanimous consent.

In other words, not a single one of Harris’ Democratic colleagues spoke up in her defense. She was abandoned by one and all.

The California Senator wasn’t called out by name, of course. That kind of public opprobrium is reserved for Republicans.

But after this stinging rebuke, Harris never directly brought up the issue of religion again in subsequent confirmation hearings.

Once was more than enough, however. We learned what Harris really thinks about the Catholic faith and its teachings. Her attack on Judge Buescher’s faith – and her subsequent rebuke by the entire U.S. Senate – has revealed for all time that she is the most bigoted of all U.S. Senators.

Joe Biden pitches himself to voters as a devout Catholic, but has picked as a running mate the biggest anti-Catholic bigot in the U.S. Senate.