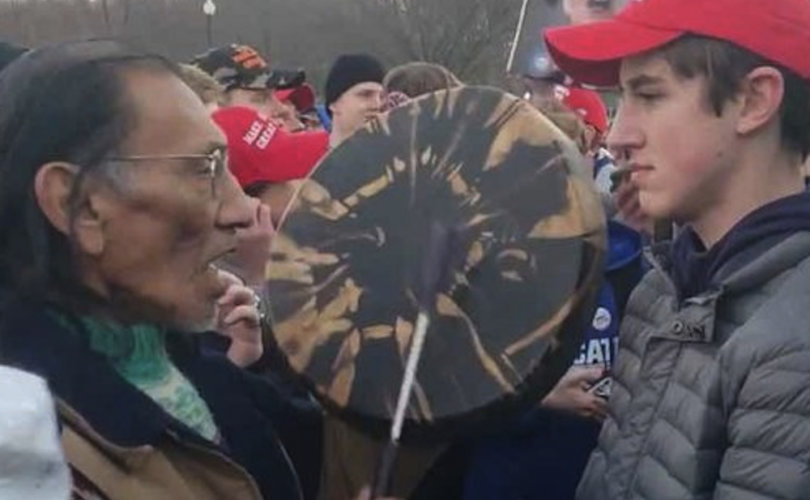 WASHINGTON, D.C., January 25, 2019 (LifeSiteNews) – There are several alarming outcomes from what happened between activist groups and Covington Catholic High School students near the Lincoln Memorial after the March for Life in Washington D.C. last week.

There is the leftist media spin that started and fed the controversy, and the resulting hatred now directed at the boys and their loved ones. But also disturbing is the handling by some Catholic leaders, media personalities, and institutions.

This could be your child

Catholic laity are calling for full apologies and retraction, and reparation from Catholic leadership who joined in the false media narrative contributing to the vilification of the Covington Catholic families. Many recognize that it could one day be them or their children caught in the devastating situation of fake news and slander in which Covington Catholic High School families have been thrust.

Hundreds of thousands of pro-life Catholics travel and send their children to the March for Life each year. It’s a big tradition for pro-life families who wish to live their faith, stand for life, make a difference in today’s anti-life culture, be civically active and give example of all of these to their children.

That’s why the response of some Catholics, specifically Church leaders – issuing public condemnation without seeking the boys’ side or obtaining all the facts – is especially distressing for them.

The Covington Catholic students were among those insulted with vulgar, bigoted slurs from members of the Black Hebrew Israelites after the March for Life. They were then confronted by Native American Activist Nathan Phillips and his group, the Indigenous Peoples March.

A viral video clip reported by the media as showing the Catholic high school boys harassing Phillips was subsequently reinterpreted upon release of full footage of events. Some media outlets walked their reports back somewhat; others did not and continue to portray the boys as racists.

Regardless, the Covington families remain the target of defamation and threats. Those death threats include a bomb threat targeting a lawyer who is representing some of the families.

Convicted but not tried

Mere hours after the January 18 events, Covington Catholic High School and the Diocese of Covington condemned the actions falsely attributed to the boys in a joint statement saying that the students’ behavior was “opposed to the Church’s teachings on the dignity and respect of the human person.”

The matter was “being investigated,” the Saturday, January 19, statement said, and they would “take appropriate action, up to and including expulsion.”

The school and diocese went further to say the incident had “tainted the entire witness of the March for Life” and apologized to everyone who’s attended the March “and all those who support the pro-life movement.”

Those have both been removed since the original media portrayal of events was debunked.

The Covington diocese released a new statement on Monday, January 21. Citing a planned protest and threats of violence, it announced that the high school, a nearby Catholic Latin school, and the diocesan chancery would remain closed for the time being.

Without having apologized for rushing to judgment or contributing to the vitriol focused on the boys and their families, the subsequent statement said, “This is a very serious matter that has already permanently altered the lives of many people.”

It also said a third-party investigation was planned to begin this week.

Kurtz followed up with more support for Foys and the Covington diocese in a statement that clarified they were condemning actions and not people, that he did not have jurisdiction in the Diocese of Covington, but sought to act in solidarity with its bishop and expressing hope for a teachable moment.

“Over the past few days, I have received many calls and email messages from people with many different viewpoints and seemingly opposite messages about the incidences involving Covington Catholic High School students at the March for Life,” Kurtz said. “Many of these calls and messages have revealed the regrettable polarization in our Church and in our society.”

The archbishop offered assurance to “those who are concerned that I am confident that Bishop Foys and the school will reach out and respond to those who were impacted by these events and media reports.”

'Those incomplete reports led many to speak out too hastily'

The Archdiocese of Baltimore has been the one diocese to apologize for having issued a condemnation without the full facts.

It had first stated Sunday on Twitter, “The Archdiocese of Baltimore condemns the disrespect shown toward a Native American elder during the March for Life. Respect for life demands all are treated with dignity.”

Monday the archdiocese said in a follow-up statement it wished to clarify its message of condemnation, reiterating condemnation of “disrespect and denigration toward any person or group based on the color of their skin, their religious or ethnic heritage, or immigrant status.”

“The circumstances of this confrontation at the Lincoln Memorial are now being reported as more complex,” it said, “and it will be the responsibility of school authorities, parents and others involved to determine the actual circumstances, responsibility and consequences.”

When LifeSiteNews inquired with the archdiocese Wednesday asking whether Lori was standing by his statement, given the debunked initial story having been the source of hate and threats for the families, the archdiocese provided a third statement apologizing for “speak[ing] out too hastily” in criticizing the Covington Catholic High School students.

The annual March for Life is a magnificent affirmation of the value and dignity of human life. It is especially wonderful that so many young people from all around the nation participate in this March and the Archdiocese of Baltimore applauds them for doing so. How sad, then, that this life-affirming event was marred by the widely reported confrontation at the Lincoln Memorial. It has become apparent, however, that initial reports of that incident were at best incomplete. Those incomplete reports led many, including the Archdiocese of Baltimore, to speak out too hastily. We apologize for doing so. It is our hope that the young people involved were in fact acting in accord with the truth and values that are foundational to Catholic education. We also hope that this sad incident will give to all a renewed determination to respect the life and dignity of every person without exception.

While the Archdiocese of Baltimore apologized, the Diocese of Covington and Bishop Foys, Covington Catholic High School and Archbishop Kurtz have not.

Nor have any of the parties apologized specifically to the Covington Catholic students and families for what they’ve experienced as a result of the rash judgment.

The Catechism of the Catholic Church says that those who “even tacitly, assumes as true, without sufficient foundation, the moral fault of a neighbor” are guilty of rash judgment, and likewise, those who, “by remarks contrary to the truth, harms the reputation of others and gives occasion for false judgments concerning them” are guilty of calumny or slander.

The Covington students and families, in particular Nick Sandmann, have suffered serious harm to their reputations; something that the Church teaches calls for reparation.

Again from the Catechism:

Every offense committed against justice and truth entails the duty of reparation, even if its author has been forgiven. When it is impossible publicly to make reparation for a wrong, it must be made secretly. If someone who has suffered harm cannot be directly compensated, he must be given moral satisfaction in the name of charity. This duty of reparation also concerns offenses against another’s reputation. This reparation, moral and sometimes material, must be evaluated in terms of the extent of the damage inflicted. It obliges in conscience.

It should be kept in mind that some of the venom being cast around consists of anti-Catholic bigotry.

Other Catholic leaders and personalities jumped on the condemnation bandwagon that helped put the Covington families in peril, with some comments, similar to some of the slurs caught on video, displaying anti-Trump attitudes.

Progressive priest author and speaker Father Dan Horan, OFM a Franciscan used the media-caused controversy to condemn the March for Life as “repulsive.”

“I'm so deeply appalled and disgusted by the racist, shameful, disrespectful behavior of the Catholic high school students wearing MAGA hats and harassing a Native American elder and Vietnam Vet,” he stated Sunday. “I'm so angry and yet not at all surprised at pervasive white supremacy exhibited.”

Horan continued, “Just one of many reasons I find the so-called “march for life” often repulsive and futile: It's basically a gathering for many right-wing anti-abortion hardliners (not consistent ethic of life, i.e. true pro-lifers) and teens to get a free trip to goof off (at best) in DC.”

Father Edward Beck, a Passionist priest who is also progressive and a CNN contributor, kept with the original narrative even after the full video’s release, criticizing that some of the boys were wearing Make America Great Again hats.

“My feelings about the #CovingtonBoys are unchanged since the first reporting and viewing many different videos,” Beck tweeted. “The boys acted inappropriately and chaperones should have intervened. And boys should not have been permitted to wear MAGA hats if they were representing the school.”

Also sticking with the slanted original story promulgated by the media of racist-associated boys whose actions purportedly contradicted the reverence of human life was decidedly LGBT–affirming Lexington Bishop John Stowe.

Stowe fixated on the hats as well.

“It astonishes me that any students participating in a pro-life activity on behalf of their school and their Catholic faith could be wearing apparel sporting the slogans of a president who denigrates the lives of immigrants, refugees and people from countries that he describes with indecent words and haphazardly endangers with life-threatening policies,” he said.