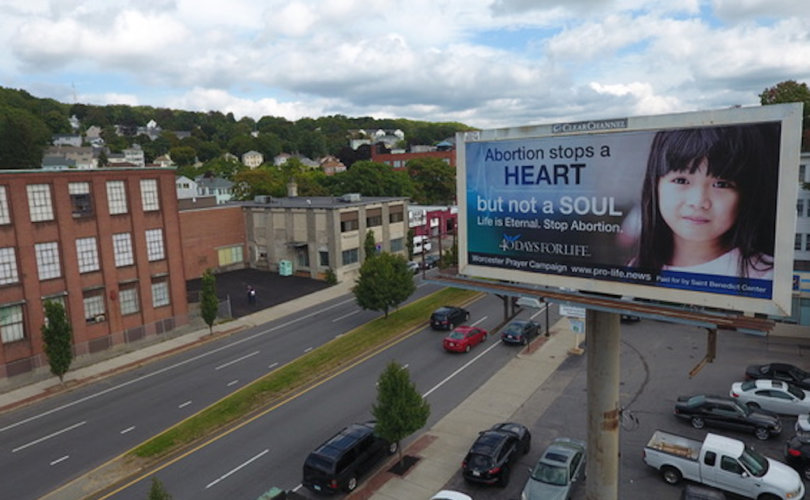 The campaign lasts for six weeks, beginning Wednesday evening, September 27, with a candlelight vigil at 7:30 p.m. in front of a local Planned Parenthood clinic in Worcester.

Hannah Bohane, a student of IHM and vice president of the Saint John the Baptist Pro-Life League, stated, “The aim of the billboard is help put an end to abortion and all its sad and evil consequences.”

Sr. Marie Bernard, who teaches art in the school, designed the billboard poster. It pictures a forlorn little girl pleading with her eyes for the end of abortion.

Sister points out that God asks through the prophet Isaiah, “Can a woman forget the child of her womb, so as not to have pity on her infant?” (Isaiah 49:15) Real life experience teaches that the answer is an emphatic “No!”

“Woman who have aborted are troubled and often picture what their child would look like years after the abortion, at four, seven, and beyond,” said Brother Thomas Augustine, Superior of Saint Benedict Center in Harvard, Massachusetts, and the Principal of Immaculate Heart of Mary School. “Birthday parties, anniversaries, and family gatherings trigger the imagination. The Catholic Church teaches that the soul of the child lives on into eternity.”

Members of the school’s student Saint John the Baptist Pro-Life League “believe that this killing must stop,” according to the school’s website. “The goal is to stop abortion through prayer and certain activities.”

Each member of the League is required to say one decade of the rosary every day for the unborn. The League also makes and distributes rosaries realizing that prayer is the only power we have against the evils of abortion.

Every year, members raise funds through raffles, etc. to hire a bus to go to Washington D.C., for the March For Life… the protest march against the Roe vs. Wade decision. Along with hundreds of thousands of Pro-Lifers from across the country and beyond, they march up Constitution Avenue to the Supreme Court.

Members also try to pray the rosary in front of local abortion mills as often as possible and promote this worthy action at all times.