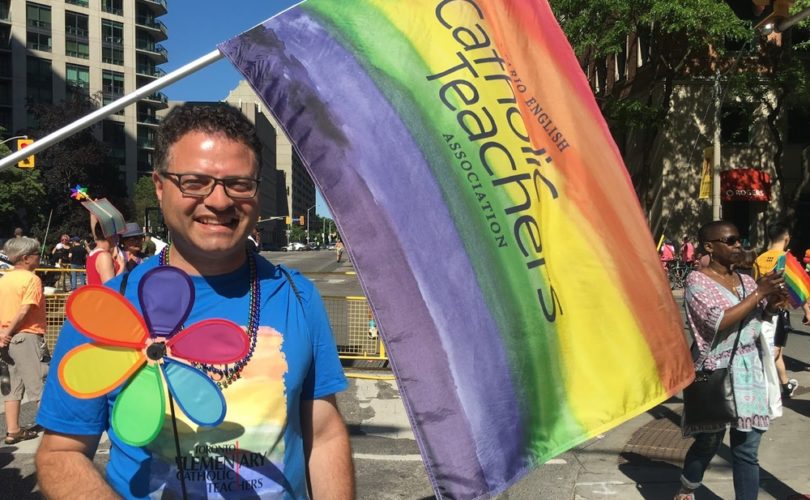 TORONTO (LifeSiteNews) – Paolo De Buono is an Ontario Catholic school educator on a mission to spread the LGBT ideology to elementary students.

He is quite active on Twitter with a personal account and also an account called The Rainbow Room, where he admits to promoting LGBT values to small children.

It is clear by his usage of the term “rainbow” that his classroom is an environment where the LGBT ideology is consistently front and center.

He tweeted June 16 that he had students “in The Rainbow Room” (why does that sound so concerning?) write poetry based on a theme for each of the “pride” colors.

Students in The Rainbow Room were asked to write poetry based on a theme for each of the #Pride colours: life, healing, sunlight, nature, harmony & spirit.

In one of his tweets, he posted a video of elementary children forming a “pride flag”.

I would so love to see this at a TCDSB school. This is such a school-community-building event for #Pride Month. https://t.co/KrcY4q7Khr

In June 2021, he tweeted that he would “no longer as a Catholic teacher teach fully Theme 3 of the Fully Alive program … ”

STATEMENT: Starting in the 2021-22 school year, I will no longer as a Catholic teacher teach fully Theme 3 of the Fully Alive program in a Gr. 1-8 classroom.

For the unaware, the Fully Alive series is the name of the program that is taught to Catholic elementary students instead of the secular sex-ed curriculum.

As someone who taught in the Catholic system for almost a decade, I can attest that the program of which he speaks is nothing close to a solidly and staunchly faithful Catholic curriculum. In reality, it is quite weak. Nonetheless, the fact that Fully Alive contains even a mention of the Church’s unchangeable teaching on marriage and sexuality was enough for De Buono to publicly proclaim his intention to not do his job.

De Buono’s LinkedIn says he was a lawyer for some years, and he seems to enjoy tweeting about the ins and outs of educational legaleze … It would be interesting to see what the Ontario College of Teachers would have to say about the ramifications for a teacher who publicly states that he will not fulfill his contractual duties.

One of De Buono’s main contentions with the curriculum he publicly detests is that it contains actual Catholic morality in it.

I am not sure if his understanding of theology or his grammar is worse – what else could we expect from a teacher these days! – but this tweet is poorly written, and the ideas are poorly expressed.

He seems to believe that it is “God’s plan” that homosexuals remain single and celibate. However, active homosexual activity is contrary to God’s law, thus it would not be “God’s plan” – at least in an active sense – for someone to be homosexual at all. Sure, God permits sin, but He does not will it, and God would never actively infuse someone with sinful inclinations.

Our sinful dispositions are on us, not God.

And his contention that “non-heterosexual students… can never marry” is not correct. It paints the bleakest possible picture of the Church’s teaching.

The reality is that the Catholic Church does not prevent those with past or currently controlled homosexual inclinations from marrying. Real, natural marriage, not re-defined, make-believe or pseudo-same-sex “marriage”, is always open to anyone, but it can only be to a person of the opposite, complementary sex. The homosexual-disposed can marry, under specific conditions, and to say that the Church teaches that they can “never marry” is a self-serving, cruel falsehood.

Many men and women with such inclinations can and often have entered into happy, productive, true marriage with a person of the opposite sex. They do so by learning to control their problematic passions and remaining faithful to and living a natural sexual relationship with their natural spouse.

One such person is LifeSite journalist Doug Mainwaring.

In a 2016 article in Public Discourse (ignore the confusing headline) Mainwaring wrote,

The man-woman definition of marriage—conjugal, complementary marriage—is an ensign not because it is just a good idea, or the best among many. It is a bright ensign because it is the truth, undeniably displayed in nature and in each of our physical beings. We are made male and female, as complements to each other. And when male and female come together, they unite as one flesh. When two males or two females attempt to join together sexually, they remain two males or two females. To base marriage solely on romantic or sexual interests requires averting our minds from easily discernible truth.
…..
Same-sex marriage is not the only option for gays and lesbians who seek personal fulfillment and familial happiness. No matter what the Supreme Court may say, marriage to a member of the opposite sex is not some kind of meaningless impossibility for the same-sex attracted. It’s the fulfillment of our deepest longings.

De Buono also seems to believe that because the curriculum states Catholic moral teaching, somehow this means that Catholic education views individuals who identify as transgenders as “not [a] whole person.

I would venture to guess that the Church and certainly not the watered-down Ontario Catholic Curriculum would not ever say that a person who is experiencing a crisis of identity is somehow not a whole person.

A person is a human being made in the image and likeness of God with a body and a soul. This applies to all people, and De Buono is wildly off-base with this statement.

In addition, he wrote in his commentary on the curriculum: “Imagine being an elementary-school-aged child in a Catholic (who is starting to better understand that they are gay) being taught by the school system itself that can NEVER be married … ”

Why is De Buono imploring people to imagine the sexual inclinations of small children? Why would anyone put the word “imagine” in a sentence about the sexuality of children? And how can he possibly definitively know the sexuality of any child and that it would be a life-long disposition? For many, if they do have such an apparent, confused disposition in their early years, it is only temporary and they go on to live a natural married life.

It is bad enough for an educator to wax philosophically about the sexual ideation of his students – but it is even more disturbing to do so with elementary-aged children.

Does De Buono have a minimum age that would allow people to responsibly cogitate on the sexual feelings of children?

Considering he teaches students who are 7-8 years old, maybe he thinks it is appropriate to consider the sexual desires of children who are that young. Should not the parents of the children he teaches be concerned about what he may be putting into their captive, vulnerable minds?

He also has a disordered understanding of the Natural Law.

He cited paragraph 2358 of the Catechism of the Catholic Church as evidence that the Church is unkind to the children about whom he asks others to imagine their sexual inclinations.

That paragraph rightly says the homosexual inclination is “objectively disordered.” This is because creation is ordered toward – among other things – pro-creation, thus a sterile sexual act cannot contribute to this end. Since creation is ordered toward one end, a decision to act on feelings that would frustrate that end are therefore not in order, which is to say disordered.

This does not mean that a person is bad. It just means that certain activities can be harmful because they go against God’s design for man.

It should alarm parents that a man who teaches in an ostensibly Catholic school system could have such a poor or distorted understanding of genuine Catholicism.

It should worry parents even more that a man such as De Buono can weave sexualized ideology into the very fabric of the lives of the small children in his Rainbow Room.