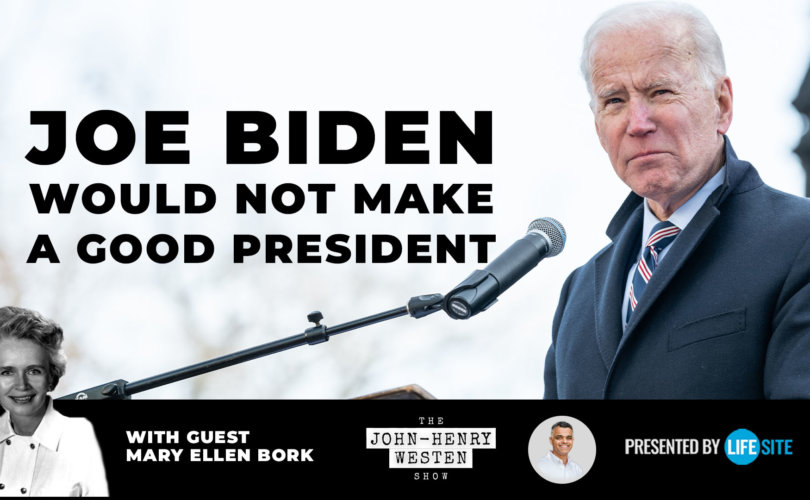 October 13, 2020 (LifeSiteNews) – The confirmation hearings of Amy Coney Barrett brings back for some memories of the despicable treatment Judge Robert Bork received in 1987 from liberal Senators Ted Kennedy and Joe Biden.

You may recall that at that time, Judge Bork would have given the more conservative side of the court a majority. Pro-abortion Ted Kennedy was having none of it.

He organized a full-court campaign with all sorts of wild accusations and claims about back-alley abortions. The slander he and Joe Biden did to Judge Bork was so bad that the verb “Borked!” has since become a popular saying that means to totally smear someone’s reputation with falsehoods so as to destroy their public image.

I wanted to learn if there were comparisons that could be made between Judge Bork and Amy Coney Barrett so I reached out to the wife of Judge Bork, Mary Ellen Bork, a former nun.

During our conversation today, Mrs. Bork explained that she and her husband would pray every morning during those hearings.

“We would pray a psalm every morning. And I remember Bob really liked the end of Psalm III, which is, ‘I will break the teeth of the wicked.’”

She said that her husband was really “taken aback” by Senator Kennedy’s claims because they “didn't reflect any of his judicial philosophy.” She also said her husband wasn’t impressed with Joe Biden at all.

“[Biden] said before Bob was nominated that if [he] came up, he would have to support him. And then once Bob was actually nominated, [Biden] immediately changed his mind and said he had to vote against him because he was completely under the control of Teddy Kennedy.”

“I was not impressed with his knowledge of constitutional law. Not that I am not a lawyer, but my husband said he really didn't know what he was talking about. And I think he has shown over the years to be somebody who just goes with whatever the popular political truth is out there. And that is not somebody that I think would make a good president.”

I asked Mrs. Bork if the Catholic Church reached out to express any sort of support for her or her husband during the whole ordeal. Given that Judge Bork was a conservative, that she was a former nun, and that Biden and Kennedy were Catholics, I expected her to tell me that some priest or bishop reached out to them.

“No, not much at all,” she said to my shock. “Friends were supportive but…there wasn’t any particular thing that I recall [from the church]. I do know that a lot of people wrote to us and said they were praying for us.”

Wow! It’s astonishing to me that the Church didn’t aid Mrs. Bork and her husband in any way at that time. I hope that Judge Barrett is receiving some sort of support from Catholic clergy as she endures her own confirmation hearings.

Mrs. Bork said that she believes Judge Barrett would be an excellent judge.

“I think she is very prepared. She knows her own mind. She knows her legal philosophy very well. And I'm sure she's been informed about some of the tactics of the left. If she has some good advisers and they practice, you know, some of the questions that will be coming up.”

She also detailed how the left views the Supreme Court and how that vision is at odds with the way her husband understood it.

“There's more at stake [now] because the Supreme Court has taken several decisions out of the hands of the American people. For example, the abortion decision. It should never have been decided by the court. That is something for the American people in their state legislatures to decide.”

“And so the problem now is that the left really sees the court as the place to get their political gains. And that is never the way the Supreme Court was intended. And Bob used to say, ‘you know, our republic, if you start to change the shape of the republic, it can't withstand that.’ So if you make the court into something more political, this is not good for our country.”