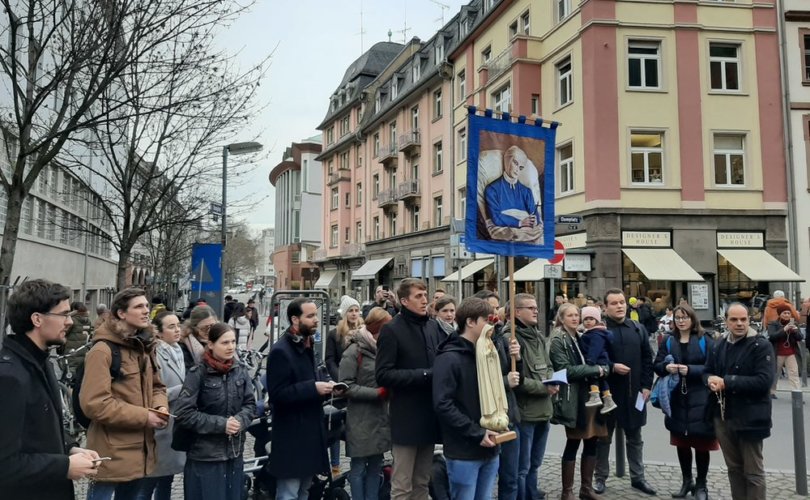 FRANKFURT, Germany, January 30, 2020 (LifeSiteNews) – A group of lay Catholics held a peaceful prayer assembly today in front of the Frankfurt Cathedral in opposition to the proposed reform agenda of the German “synodal path.” The “synodal path” is organized by the German Bishops' Conference and the Central Committee of German Catholics (ZdK).

Hedwig Beverfoerde, a German pro-family activist who recently participated in the January 18 Acies Ordinata prayer assembly against the synodal path in Munich, told LifeSiteNews: “These young people – the future of the Church – have picked up the spirit of the original Munich prayer assembly Acies Ordinata and they carried it to Frankfurt, right in front of the bishops.”

This spontaneous prayer assembly took place on the first day of the first synodal assembly that is happening in Frankfurt from January 30 to February 1. A group of about 25 young lay faithful stood outside the Frankfurt Cathedral and prayed the rosary and sang songs. One of the faithful held up a picture of Blessed Catherine Emmerich (d. 1824), a German mystic and stigmatist who had many mystical visions, among them one about a deep Church crisis. Another carried a statue of Our Lady of Fatima. According to one source, this group of young Catholics prayed to Our Lady for the Catholic Church, for the conversion of her enemies, and for the “preservation of the traditional faith.”

One of the organizers of this prayer vigil, Markus Roth, made the following statement which LifeSiteNews is permitted to publish herewith:

“We have organized a vigil in front of the cathedral with young Catholics from different local parishes to give Our Lady the honour she deserves and to pray for the One, Holy, Catholic and Apostolic Church. We think that it's our duty to give a public sign to our bishops and to the Church that the actual synodal process is not representative of German Catholicism. Many Catholics here suffer under the ambitions to liberalize the doctrine and discipline of our Church. We know that many bishops are afraid to speak up in public for the defense of the truth. To them we would like to say: The Catholic laity needs your guidance! We pray for you with all our heart that you'll be true shepherds to your flock. We received the Faith through the successors of the apostles, now help us to remain faithful! With the prayer of the holy Rosary we also expressed our deep confidence in the power of Our Lady. We're not afraid of the future and the things to come. We know that her Immaculate Heart will triumph. We want to preserve the traditional Faith, we want to live and die Catholic!”

The feminist group Maria 2.0 also was present at the Frankfurt Cathedral, holding images of the face of the Blessed Mother with tape on her mouth, as if women are put aside in the Catholic Church. This group, which is calling for the female “priesthood” and access to all Church offices, organized last year a women's strike on a Sunday, thus calling upon Catholics to commit a mortal sin by not fulfilling their Sunday obligation to go to Mass that day.

At today's event, the women stood along the path which the bishops and other members of the synodal assembly had to walk in order to enter the Frankfurt Cathedral for Mass, holding up signs with slogans such as “Women, what are you waiting for?”

During the entire synodal meeting in Frankfurt, some Catholics have openly organized many hours of Eucharistic adoration in a side chapel of the Frankfurt Cathedral. The hours for tomorrow and for Saturday are listed here.

230 members of that assembly aim at questioning various aspects of the Church's perrenial teaching on matters such as female “ordination,” priestly celibacy, homosexuality, cohabitation, contraception, and gender theory. Every German diocese will participate in this process, but, surprisingly, there are more laymen among the members of the synodal assembly than clergymen, and the bishops are in a minority. However, the decisions of the synodal path will have no binding character and will have to be implemented individually by the bishops in their own dioceses.

However, at a press conference today, Professor Thomas Sternberg, the president of the ZdK, put pressure on bishops who might not go along with the final decisions of the synodal path. He stated that he would ask any such a bishop who does not implement the overall synodal decisions in his own diocese, “How is your understanding of synodality, when decisions have been made?”

Furthermore, Sternberg – who along with Cardinal Reinhard Marx was the main speaker at today's press conference – explained that there are three kinds of decisions that might be made by the synodal assembly: those that can be implemented “in Germany”; those that stand under Roman supervision and need to be sent to Rome as a “vote” (“Votum”); and finally those decisions that “the Pope himself could not decide upon by himself,” and that would need to be discussed and decided by a Council.

Sternberg also claimed that the Pope could “introduce the female diaconate,” but not the “female priesthood.” It is not clear here whether Sternberg was speaking of a sacramental female “diaconate” or some other form of female “diaconate.”

Marx stressed the aspect of synodality, suggesting that one cannot organize the Catholic Church “in a centralizing manner.” This aspect needed to be “thought through” and “further developed,” the head of the German Bishops' Conference explained. He also sought to explain that the German synodal path aims at “presenting their votes to the Universal Church” and at “talking with one another.”

When asked by a journalist about Pope Francis' insistence upon evangelization, Cardinal Marx responded: “we need to be first evangelized; we should not stand there and say: ‘I know the truth.’”

“Without conversion,” he continued, “there is no evangelization.” He stated this in the context of the current clerical sex abuse crisis in Germany, which is, according to the organizers of the synodal path, the very reason for the synodal discussions.

When further questioned about the “crisis of faith” in Germany, Marx also rejected the idea of saying that “the Church is right, and the others are wrong.”

“That is not right,” he commented. “What has happened in our midst” is not only due to “secularization.”

There is a dispute among Catholics in Germany as to whether it is more important to revive the full Catholic faith and to catechize the faithful again – as proposed by Cardinal Rainer Woelki and Bishop Rudolf Voderholzer – or whether the current crisis could be overcome by “updating” the Church's teaching on matters like sexuality, priestly celibacy, and female “ordination.”

Cardinal Paul Josef Cordes, a retired curial cardinal, states in an interview today with the Italian website La Nuova Bussola Quotidiana that “with the ‘synodal path,’ the German Bishops' Conference has started a very dangerous ecclesial process. De facto, the possibility for a schism is now opened up.”