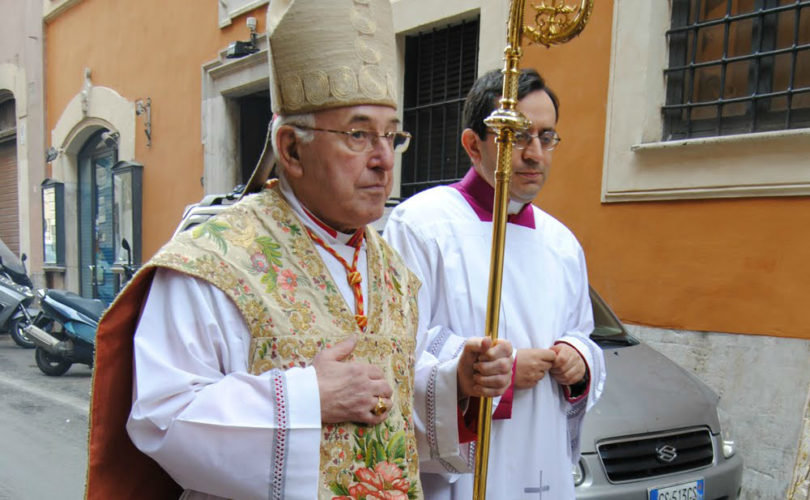 February 28, 2019 (LifeSiteNews) – Cardinal Walter Brandmüller, one of the dubia signers, warned Catholics who leave the one true Church, whatever the reason might be, that they risk falling into eternal damnation of “existential nothingness.”

Leaving the Church, Cardinal Brandmüller said, means “to fall into an existential nothingness, and this, at the moment of death, [would be] forever.” Brandmüller made the comment in a recent interview while speaking about the reasons for the increased numbers of Bavarian Catholics who have left the Church.

He also quoted St. Augustine who said that Catholics are like branches who are “either on the vine or in the fire.” Brandmüller also said, nonetheless, that he felt encouraged by the “growing numbers of young people” who have decided to “serve the Church” in spite of the current scandals.

Speaking with Dr. Armin Schwibach – the Rome Correspondent of the Austrian Catholic news website Kath net – Cardinal Brandmüller first explained some reasons why, in 2018, there has been an increase of 25% of Catholics leaving the Catholic Church in Bavaria. He said there were a number of cultural Catholics who stayed in the Church by virtue of habit but who have now left due to the scandals that are occurring in the Church.

“The sharp wind that is currently driving through the tree 'Church',” Brandmüller explained, “now blows away those dead and dried up leaves.” When “only 5% to 10% of the Catholics who pay the Church tax find their way to Church on Sundays, then it is clear how many really have the Faith and practice it.” Thus, those official steps taken for leaving the Church make merely visible “what has been a lived reality for a long time.”

In Germany, Catholics have to register with the state in order to pay obligatory Church taxes. When Catholics exit this system, the German bishops refuse to administer the Sacraments to them and declare them excommunicated. One problem with this system is that faithful Catholics in Germany are forced to fund projects from the official Catholic Church that sometimes promote heterodox views. Adding to the confusion caused in Catholics is that the Catholic Church in Germany in many parts now officially gives Holy Communion to “remarried” divorcees and to Protestant spouses of Catholics, something that violates the Church's teaching and discipline.

It is in this context that the German cardinal also sees another group of Catholics now leaving the Church in Germany. These are those who leave the Church “for completely different reasons.” “It is their protest against an apparatus that is encrusted in bureaucratic structures. For those [bureaucratic] officials, the truth of the Faith, the moral norms of the Gospels, the Sacraments, and the adoration of God play only a secondary role, if any.”

Further commenting on this group of Catholics — who leave the official structures of the Catholic Church in Germany which binds them to an obligatory financial support by way of the Church tax collected yearly by the state — the German prelate, who now lives in Rome, said  that they “are people who would rather drive an hour in the car in order to witness a Holy Mass celebrated in a dignified manner.”

Responding to the searching question of Dr. Schwibach as to what went wrong in the last 60 years with regard to the communication of the image and substance of the Catholic Church, Brandmüller indicated that if one understands the Catholic Church as a form of “NGO with religious-folkloristic-charitable program,” then people leave if something is not pleasing to them. “But,” the Cardinal added, “the Church is really something completely different!” It is the “People of God,” the “Body of Christ,” he explained, adding that she is “not made by man, but it is the work and instrument of Jesus Christ for the redemption of mankind, of the universe.” He added that the Church “is also the barque of the fisherman Peter in order to pass the stormy sea. Of course, one can exit there….”

The true act of leaving the Church, according to the prelate, is taking place “when one apostatizes from the Faith,” the Cardinal further stated, adding that “this has nothing anymore to do with the state's Church tax office, but with the Living God.” The cardinal pointed to the consequences of this apostasy by referring to the Gospel of John, chapter 15, wherein the Evangelist explains that only those branches that are connected with the vine – with Our Lord – can bear fruit, and that those separated from the vine “dry up to be burned.” Here, Brandmüller quoted St. Augustine: “One of the two things will happen to the branch: either the vine or the fire.” Commenting on these words, the German prelate said to Dr. Schwibach: “Do you now understand that I really cannot do anything else but remain in the Church, as a branch on the vine? And this in spite of all the scandals.”

Brandmüller said that in his twenty years in Rome he has seen much “selfless service, piety, and loyalty to the Faith,” but also “much that is bad.” “Here,” he added, “one has learned to suffer in, under, and with the Church. But 'to leave'? That would mean to fall into an existential nothingness – and this, at the moment of death, [would be] forever….”

Ending the interview with a positive tone, Cardinal Brandmüller said that he is “filled with trustful assurance” because of the “growing number of young people who, while being fully aware of the current scandals and problems, are nevertheless determined to serve the Church, the Lord, either as priests or in the religious state. They often know from experience that the Church's apparatus looks upon them with mistrust, yes, even with aversion. They have experienced that he who prayed the rosary etc. was being dismissed from the priestly seminary.” Especially in France, the cardinal explained, there have been founded new religious communities “which wish to serve the Church with a decisive loyalty toward the Faith.” “The Holy Ghost is at work – even today,” he added.

Brandmüller, who is one of the two remaining dubia cardinals, concluded with the words: “The heraldry of the city of Paris shows a ship on the high waves on the Seine [river]. And with it the motto: Fluctuat nec mergitur – tossed back and forth by the waves – the ship does not, however, capsize! How much more is this applicable to the Church!”