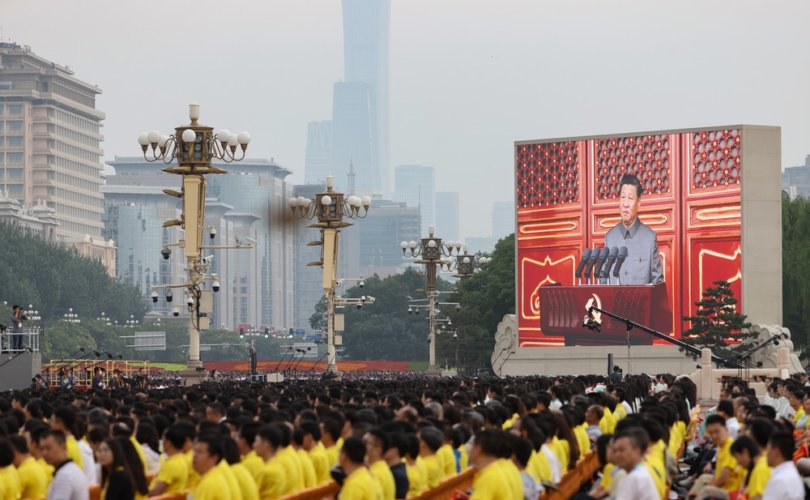 Chinese President Xi Jinping makes a speech during the celebration marking the 100th anniversary of the founding of the Chinese Communist Party at Tiananmen Square on July 1, 2021 in Beijing, China. Lintao Zhang / Getty Images

(LifeSiteNews) – Peter Schweizer, whom I count as a friend, has released an investigative bombshell that is rocking Washington. Called Red-Handed: How American Elites Get Rich Helping China Win, it documents with devastating precision how leading American political families of both parties – but primarily Democrat – have been helping the Chinese Communist Party in its quest for global hegemony. Like Hunter Biden, these well-connected players do not work for free, but are richly compensated by their new employers.

Among those who Schweizer has caught with their hands in the Chinese fortune cookie jar are the Pelosis, the Bushes, the Feinsteins, and, of course, the Bidens. All have proven all too ready to put Beijing’s interests ahead of America’s own – for a price.

Nancy Pelosi: Occupying one of the securest congressional seats for a Democrat in the country, San Francisco, Pelosi rose to become Speaker of the House. Representing a city with a large Chinese-American population, she was a prominent critic of the Chinese Communist Party – until China started offering her husband and son lucrative deals.

One turning point came during the 2008 Beijing Olympics. Pelosi was in favor of boycotting the games until her husband’s California-based limousine companies somehow got major contracts in China to cart VIPs around the Olympics. Pelosi then flipped, saying she was opposed to a boycott. It gets worse. Pelosi’s family has done a lot of business in China since the COVID outbreak, Schweizer notes, suggesting that it is perhaps not a coincidence that she has refused to allow congressional hearings to discuss the origins of COVID.

George W. Bush: The CCP has played the same game with the Bushes for decades. In fact, Schweizer notes, the first sweetheart deal was offered to George H. W. Bush’s brother, Prescott, when Bush was vice president.

In Red-Handed, Schweizer reveals that “During the George W. Bush presidency, a new generation of Bushes began securing deals with Chinese officials. Neil Bush, brother of the president, signed a contract with a Chinese company called Grace Semiconductor Manufacturing. Bush had no background in computing, but the firm paid him $400,000 a year.”

Neil Bush remains a regular contributor to Chinese state media, where he can be found attacking the tariffs that former President Trump placed on Chinese goods, as well as calling for closer ties between China and the U.S. Schweizer notes that former Florida Gov. Jeb Bush also has ties to China, and that “at least nine Chinese nationals linked to Chinese government-connected front groups” aided his failed 2016 presidential run by making donations to Super PACs.

At least one deal severely jeopardized U.S. national security. Blum became a major investor in a Chinese computer company called Lenovo, which somehow manage to sell its products to the U.S. military. The problem is that the computers contained spyware chips enabling Chinese operatives to remotely access them. The Pentagon has never been able to accurately access how much damage this did to U.S. national security.

Joe Biden: Schweizer dedicates a large part of his book to the Bidens, and not just because the head of the Biden crime family is the current occupant of the White House. As he describes it, the family’s dealings with China were “unprecedented” because they entered into deals with persons connected to the highest levels of Chinese intelligence.

“One of the most startling things we uncovered is the simple fact that the Biden family, while he was vice president of the United States and continuing when he became president, received some $31 million from Chinese individuals who are linked to the highest levels of Chinese intelligence,” Schweizer outlined on Fox News Channel’s Life, Liberty & Levin.

He continued, “And these deals, which we lay out in the book, were carried out by a couple of individuals. One is a guy named Che Feng… [whose] business partner was the vice minister at the ministry for state security. He was in charge of, among other things, recruiting foreign nationals to spy for China. He was the head of something called the Number Eight Bureau. It doesn’t get any higher than that. These are the sorts of individuals that were striking deals with Hunter Biden. In this particular case, Che Feng happened to help a $20 million deal be secured.”

“Another individual that helped arrange that deal is a guy named Mr. Zhao,” said Schwizer. “Mr. Zhao helped with that $20 million deal. He also sent $5 million to Hunter Biden, and he sent that money from a very interesting business called Harvest Global.”

And Zhao’s business partner is “the daughter of the former head of the ministry of state security.”

“This is the guy who runs the entire spy apparatus for China,” Schweizer emphasized. “Again, it does not get any higher than that.”

Now there have been quite a few stories published over the past few years mentioning the Biden family’s corrupt dealings, especially regarding Hunter and his now-famous laptop (which the FBI has apparently managed to misplace).

What is different about Red-Handed is the sheer volume of corroborating evidence that Schweizer and his team of forensic investigators have managed to assemble. They have poured over everything from legal filings, tax returns, and corporate records to make their case, which they bolster by over 1,000 endnotes. And unlike the hearsay books scribbled by lazy progressive journalists, Schweizer’s book contains zero unnamed sources.

Schweizer has said that, in a quarter-century as an investigative journalist, this is the scariest investigation he has ever conducted. Coming from the author of such past bombshells as Profiles in Corruption, Secret Empires, and Clinton Cash, this is quite a statement.

But I think it will be even scarier for the average American reader to learn how willing our elites, up to and including presidential families, to serve the interests of the most brutal one-party dictatorship the planet has ever seen.

Even more shocking are the rationalizations that some offer for their cupidity. Rather than admit that they are driven by greed, some of those taking Chinese cash have apparently convinced themselves that they are on the right side of history. They quietly suggest that China’s high-tech digital dictatorship is superior to American democracy. In their view they are merely, by taking Chinese money, joining the winning side.

By exposing their corrupt dealings with the Chinese Communist dictatorship, Red-Handed will go a long way towards ensuring that neither they nor Communist China win in the end.

Steven W. Mosher is the President of the Population Research Institute and the author of Bully of Asia: Why China’s Dream is the New Threat to World Order, now out in a new, expanded paperback edition.