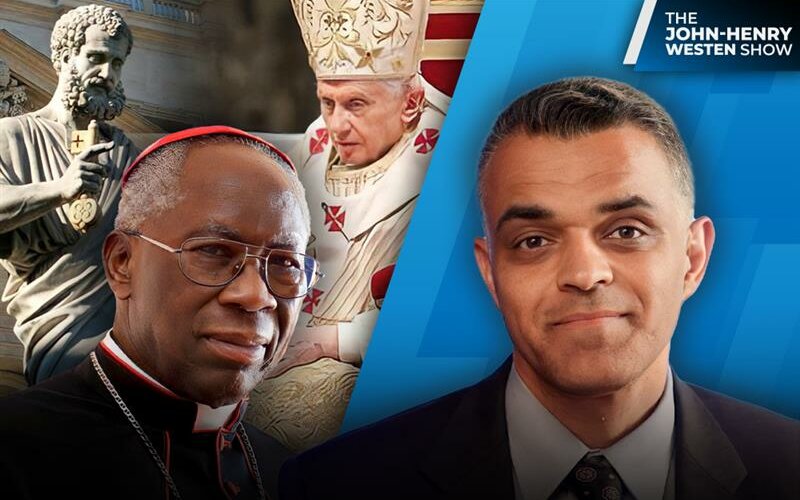 (LifeSiteNews) — A Nigerian cardinal who has been a longtime friend of LifeSiteNews was kind enough to join me on this episode of The John-Henry Westen Show, filmed on a balcony directly across from St. Peter’s Square in Rome.

Cardinal Francis Arinze, former prefect of the Congregation for Divine Worship and the Discipline of the Sacraments from 2002 to 2008, shared with me his thoughts on the late Pope Benedict XVI, including Benedict’s love of the liturgy and music, his deep love for Jesus Christ, his papacy, handling of the sex abuse crisis, and more.

Arinze and Benedict’s friendship went back decades, when the latter was known to everyone as Joseph Ratzinger. His Eminence remembered Ratzinger as a “master” theologian who never failed to be charitable to other theologians, even if their books had “errors.”

“You knew you were talking with a master. You [went] away like a person going away from a theological banquet, because you knew he was a balanced theologian,” Cardinal Arinze said. “I admired especially his gentleness in giving credit to a theologian, even if the theologian had some errors in his book.”

“But he was able to never use the harsh word on anybody,” he continued, “even when the theologian came dangerously [close to] being an iconoclast, breaking all the statues in the Church. But he always used gentle words, fair, and [allowed] everyone to have a say, which the public often does not know.”

His Eminence made it clear Benedict wasn’t chomping at the bit to become pope, precisely because he was a very gentle man who didn’t like dealing with messy situations and exerting authority. In fact, as Cardinal Arinze noted, Cardinal Ratzinger wanted to retire from his post as Prefect of the Congregation for the Doctrine of the Faith (CDF), but Pope John Paul II wouldn’t let him.

“He wasn’t anxious to become pope. You are not a politician who is campaigning for election. We admired therefore his bowing in front of divine providence,” he said. “And … if you saw what he wrote on the sacred liturgy, and you saw how he celebrated the Mass, you see then that our faith is very precious, and this man symbolizes it.”

“Think of all that he must have suffered as pope. He had not, he could not, avoid handling [the sex abuse] situation,” Arinze added later. “If [people abused by clergy] wanted to meet him, he met them. He would listen to them. We are told that even he cried with some of those abused. So, these are facts which can come up when his cause of beatification is opened, as I hope one day.”

In addition to sharing his reflections on the late Pope Benedict, Cardinal Arinze shared some thoughts about the so-called “Synodal Way” in Germany, Benedict’s homeland, that currently threatens a schismatic breakaway from the Church.

“The human being has no authority to change any of the Ten Commandments. We cannot and we should not,” His Eminence said, referring to the Synodal Way’s concern with “changing” Church teaching on sexuality and other matters. “Even if they are not popular, even if they are not easy, they don’t change.”

“It isn’t we who make what we believe, but we receive, which means there are some things that are so and they don’t change.”