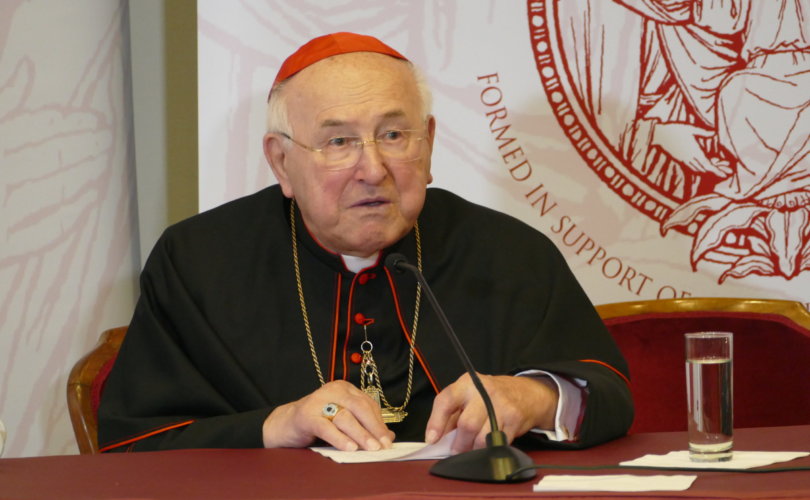 The assembly has approved of homosexuality, women’s ordination, and gender fluidity.

A minority of bishops had, with a September 8 vote, rejected a heterodox document on sexuality, but then the leadership of the assembly, which consists of bishops and lay people, decided to still make use of the rejected document and to put these dissenting bishops on the spot by forbidding secret ballots. The consequence was a collapse of the opposition on the second day, followed by the approval of above-mentioned topics.

LifeSite reached out to Cardinal Brandmüller – who is also one of the four Dubia cardinals who asked Pope Francis in 2016 to clarify certain problematic statements in his document Amoris laetitia – for comment on the German Synodal Path.

In his submission (see full text below), the German prelate says that the decisions of the German bishops – the majority of which supported the heretical statements – “diametrically contradicted the teaching of Holy Scripture and the Apostolic Tradition.” He wonders if they forgot the oaths they made at their priestly ordination and then at their episcopal consecration. The recent decisions at the German assembly reveal for him “an understanding of the Church, of the doctrine of faith and morals, which is worlds apart from the authentic proclamation of the faith of the Church.”

The German Synodal Path seems to think that it can adapt itself to the zeitgeist of its time, forgetting God’s revelation.

Cardinal Brandmüller is reminded of “that rebellion of man against his Creator, as the fatal grasp for the fruit of the Forbidden Tree, which in the course of human history has been repeated again and again, and in ever new forms, and has resulted in streams of blood and tears.”

As a church historian, the 93-year-old prelate also sees a parallel to the struggles of the 4th and 5th centuries A.D., “when the majority of the Eastern bishops of the Arian heresy denied the divinity of Jesus, while Saint Athanasius, persecuted by them, was expelled several times from his episcopal see or had to flee.” But he also warns the German bishops and lay people of the consequences of heresy when he adds: “Soon the armies of the prophet from Mecca fell upon these churches, leaving them in smoke and ruins….”

This is not the first time that Cardinal Brandmüller has publicly criticized the German Synodal Path which started in 2019. He had warned against it even then, saying that it could lead to a “national church” without “nearly any ties to Rome” and that this would be “certainly be the surest path into the final decline.” He called the assembly to fidelity to the Church’s magisterium and, just this March, he reminded the German bishops of their oath at their episcopal consecration. With these repeated interventions, indeed, Cardinal Brandmüller shows his own fidelity to the Church’s teaching and love for the Church, in imitation of St. Athanasius in the 4th century.

The failure of the Frankfurt “Synod” document on sexual ethics is remarkable in several respects. First, the text presented was rejected by the assembly. The votes of the bishops had not been sufficient for the adoption of the text, a text that 82.8% of the lay members of the synod and 61.1% of the bishops had accepted. The latter had fallen short of the required 2/3 majority. If Bishop Bätzing, in view of this voting result, spoke of a “crisis,” then this is undoubtedly true. But not in the sense of Bishop Bätzing. The crisis of this vote consisted in fact in the fact that 82.2% of the lay synod members diametrically contradicted the teaching of Holy Scripture and the Apostolic Tradition. Even worse, 61.1% of the voting bishops also did so. This means that only 17.2% of the laity and only 38.9% of the bishops were committed to the teaching of the Church.

This result, however, can only be called a mass apostasy from Holy Scripture and Tradition, the sources of the faith revealed by God. The result of this vote reveals an understanding of the Church, of the doctrine of faith and morals, which is worlds apart from the authentic proclamation of the faith of the Church. Religion, Church, faith: in this “synodal” view, these are variable factors that can be adapted to the social and cultural conditions of the particular “today.” [This is] a point-of-view that not only makes it possible for the Church, but indeed even demands it, to march into the future in step with society, even as its avant-garde.

At this point, however, the question must be asked whether such a conviction is still compatible with the authentic Catholic, indeed Christian, faith. The same question may be asked by a Jew, but not only that, Aristotle and Plato are also quickly disposed of in the wastebasket with superior smiles by the zeitgeisty Frankfurt moralists. They do not even ask what “the German philosopher” from Königsberg [Immanuel Kant] would have said about it. It is a cultural collapse of “the people of poets and thinkers.”

But then it is also about the essence of religion. Does the whole thing possibly not only have to do with man, but primarily with the Creator of man and the world, with God?

And with the self-revelation of the Creator to his creature man?

That is indeed what it is all about.

God has – so the beginning of the letter to the Hebrews – “Many times and in many ways God spoke to our fathers, but last of all through his Son.” Now, of course, it depends decisively on whether I really recognize in the written record of this message a word of the Living God to his creature man, or in it only a product of Near Eastern literature of antiquity. But if it is really about God’s Word, on whose faithful hearing and obeying it definitely depends, whether the life of man, of the human community succeeds or falls into chaos, then the question arises, what authorizes the Frankfurt Synod to refuse this reality?

In the Frankfurt resolutions nothing less happens here and there than that rebellion of man against his Creator, as the fatal grasp for the fruit of the Forbidden Tree, which in the course of human history has been repeated again and again, and in ever new forms, and has resulted in streams of blood and tears. And now the Frankfurt-German Church is doing the same.

But what is really alarming and dismaying is that the consecrated and commissioned shepherds of the Church, the bishops, have in such large numbers apparently easily forgotten the oath they first swore before their ordination to the priesthood and then at their episcopal consecration before all the people – and before God’s Face. One is reminded, like John Henry Newman more than a hundred years ago, of the 4th/5th century, when the majority of the Eastern bishops of the Arian heresy denied the divinity of Jesus, while Saint Athanasius, persecuted by them, was expelled several times from his episcopal see or had to flee.

Soon the armies of the prophet from Mecca fell upon these churches, leaving them in smoke and ruins….