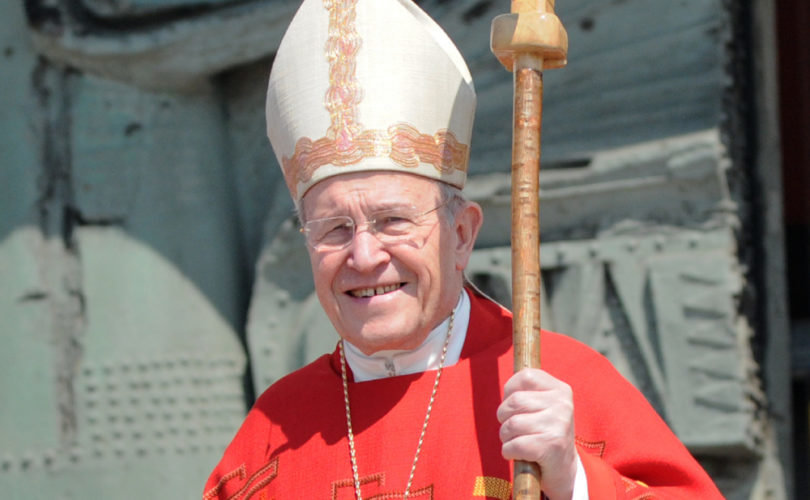 Kasper even compares Cardinal Müller, the former Prefect of the Congregation for the Doctrine of the Faith, to Martin Luther, insinuating that he tries to bypass the Pope in his push for various reforms. Katholisch.de published only a very short report about Müller's text, but published Kasper's entire statement.

At the beginning, Cardinal Kasper says, “without doubt,” the Manifesto contains “many doctrines which can only be approved full heartedly by any upright Catholic.” However, he says that there are “some truths” that are being presented “in such a pointed way that the other half is being blocked.” As an example, the German cardinal presents Cardinal Müller's reiteration of the teaching on the Holy Trinity, “which presents, without doubt, a fundamental difference” to other religions.

“But are there not also things we have in common, especially with the Jews as with the Muslims, in the belief in one God?” Kasper asks, adding they are fundamental for the “peace in the world.”

“The half-truth is not the Catholic truth!” he exclaims.

Furthermore, Kasper accuses Müller of presenting “a manifesto of private theological views.” Here, Kasper refers to his fellow cardinal's statement that both “remarried” divorcees and non-Catholic Christians – just as all who are not properly disposed – cannot “fruitfully” receive the Holy Eucharist “because it does not bring them to salvation.” Here, Cardinal Müller makes reference to the Catechism of the Catholic Church, which teaches, “Anyone who is aware of having committed a mortal sin must not receive Holy Communion” before receiving an absolution in the Sacrament of Penance (CCC 1457).

But Cardinal Kasper claims that, in this specific number of the Catechism, he cannot find Cardinal Müller's own sentence: “I have looked it up twice and did not find this sentence this way.” Moreover, he adds, “I also do not know any other dogmatically binding statement which contains this sentence in this form.”

Cardinal Kasper also tries to argue that one cannot find in the Church's teaching that “remarried” divorcees and non-Catholic Christians cannot receive the Holy Eucharist fruitfully, unto salvation.

“Who can decide about this, and what is with them?” Kasper asks.

Further questioning Cardinal Müller's doctrinal document, Kasper claims that his words about celibacy are incomplete since the 1992 Catechism states that priests “normally” choose celibacy, but that there are also exceptions to this general rule, such as in the Eastern rites and with converts from Protestantism and Anglicanism. Cardinal Müller had stated: “Therefore, priests voluntarily opt for celibacy as ‘a sign of new life’ (CCC 1579).”

While Müller had not mentioned the “viri probati” (morally proven married men) as such, Kasper comments: “Even if I am of the personal opinion that one should reflect once again anew and in a deeper fashion about the freely-chosen celibacy of the priests, at least the discussion on the viri probati may not be forbidden.”

Moreover, Kasper says he is “totally appalled” about the end of the Müller Manifesto and its words on the Antichrist. Müller wrote: “To keep silent about these and the other truths of the Faith and to teach people accordingly is the greatest deception against which the Catechism vigorously warns. It represents the last trial of the Church and leads man to a religious delusion, ‘the price of their apostasy’; it is the fraud of Antichrist.”

Here, Cardinal Kasper feels “reminded, and nearly verbatim, of Martin Luther's argumentation. Also Luther at the time rightly criticized much in the Church. But the Antichrist-accusation was even then inappropriate – as today also our Lutheran partners of dialogue say. Is there behind the manifesto a Luther redivivus [reborn], one who rightly works for reforms in the Church, but then wishes to impose them while bypassing the Pope and working against him?”

“I do not wish to believe this, that could only lead to confusion and schism,” Kasper adds. “This would unhinge the Catholic Church.”

Here it might be worthwhile to remember that, in 1993, then-Bishop Kasper was one of three German bishops who issued his own guidelines permitting some “remarried” divorcees access to Holy Communion. The bishops issued these guidelines without first asking for the Pope's approval. Subsequently, the Vatican's Congregation for the Doctrine of the Faith had to intervene. It rejected the statement of these three German bishops – Kasper, Karl Lehmann, and Oskar Saier.

Peter Winnemöller, a German Catholic journalist writing for the Austrian website Kath.net, says that this Kasper intervention is “manipulation.” He says: “It was only a question of time until someone from St. Gallen would enter the ring.”

Of Kasper accusing Müller of half-truths and Kasper presenting himself as “the defender of full truths,” Winnemöller comments: “Great, the whole truth, for example the one that the Africans should not participate in the discussion on the level of the Universal Church because they do not understand the problems of Europe, he once explained to us.”

This is a reference to the incident when Kasper, during the 2014 Synod on the Family, told some journalists demeaningly that Africans “should not tell us too much” with regard to the question of homosexuality: “I think in the end there must be a general line in the Church, general criteria, but then the questions of Africa we cannot solve. There must be space also for the local bishops’ conferences to solve their problems but I’d say with Africa it’s impossible [for us to solve]. But they should not tell us too much what we have to do.”

Cardinal Kasper at first denied having spoken these words and then, after Edward Pentin published the audio file proving the cardinal did in fact say them, he apologized.

Winnemöller also points out that, “because one cannot attack the Manifesto of Faith of Cardinal Müller in its substance, Kasper plays the game indirectly and presents peculiar aspects of truth which are in the current context completely irrelevant,” such as the reference to the monotheistic belief of all three world religions.

“Kasper does not explain to us why this is important with regard to [the] strengthening of the Catholic Faith,” the German journalist says.

Kasper, according to the German journalist, “manipulates” readers by twisting the words of his fellow cardinal when speaking about “remarried” divorcees and non-Catholic Christians.

While Müller spoke “from the inner logic of the Sacrament” of the Holy Eucharist and thus explained why such persons cannot fruitfully receive Holy Communion, Kasper reduces the sentence to a reference to a specific number of the Catechism.

“Kasper accuses his fellow brother in the College of Cardinals of misquoting the Catechism. This is a worst form of manipulation,” the German journalist comments, and then presents the two statements on the matter by both Kasper and Müller.

“Here, one can clearly see how Cardinal Kasper manipulates the readers,” Winnemöller adds. He also notes that Katholisch.de published only a very vague presentation of Müller's Manifesto but published the whole statement by Kasper.

“The manipulation will take its course,” Winnemöller continues. “It is to be hoped that many priests display it [the Müller Manifesto] and distribute it [in their parishes].”