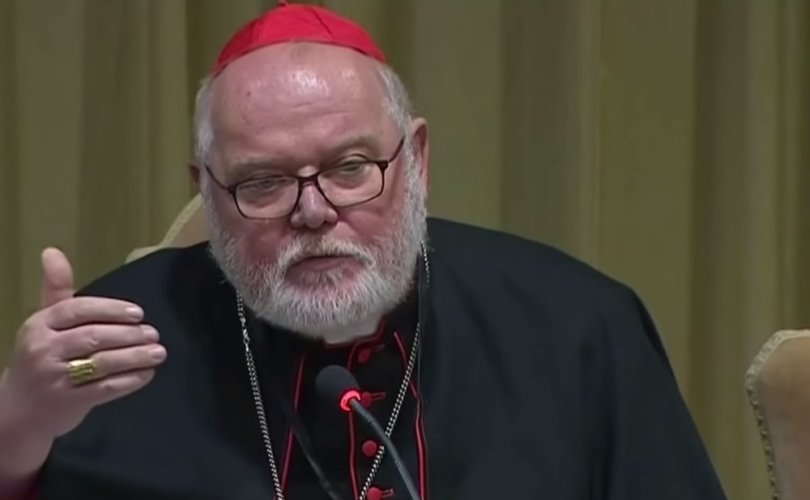 January 10, 2020 (LifeSiteNews) – Cardinal Reinhard Marx – the archbishop of Munich-Freising and the head of the German Bishops' Conference – just made a statement, in which he argued against spreading fear, saying: “wherever someone spreads fear – of hell or whatever else – the Gospel cannot have an effect.”

He added with regard to the topic of religion and its relation to peace that “sometimes one has to say: stop the religion!”

Marx spoke these words during a discussion forum “Augsburger Friedensgespräche” in Augsburg, which is dedicated to the matter of peace. His Protestant counterpart, the head of the Evangelical Church of Germany (EKD), Bishop Heinrich Bedford-Strohm, also spoke at the event that took place on January 8.

The German cardinal explained that he believes that, in its essence, all religions are working for peace.

“But sometimes,” he added, “that essence gets buried.” According to him, religion may not be used against men or for the sake of preservation of power.

Bishop Bedford-Strohm added that, while in former times, the church had blessed weapons, but she is now, instead, known for her work for the protection of the environment. “I prefer the latter,” he added. It belongs to the DNA of the church, the bishop explained, to promote reconciliation.

Cardinal Marx added in his own remarks that “we do not wish to change the society of freedom.” One should not exclude someone, only because he is not going to church every Sunday. “Wherever someone spreads fear – of hell or whatever else – the Gospel cannot have an effect,” he added.

On social media, these words have already caused a stir, with Catholics strongly reacting against them.

The Catholic architect and author Eric Bootsma commented on these words with the tweet: “'The fear of the Lord is the beginning of wisdom: and the knowledge of the holy is prudence.' Proverbs 9:10”

One commentator on twitter said: “You can always count on German prelates to churn heretical statements on a regular basis. Cardinal Marx has probably forgotten to open his Bible lately: 'The fear of the Lord is the beginning of wisdom' Prov 1:7 He proves himself a fool.”

Yet another commentator quoted the words of Our Lord in the Gospel of Matthew (10:28): “‘Do not be afraid of those who kill the body but cannot kill the soul. Rather, be afraid of the One who can destroy both soul and body in hell.’”

Other comments on Twitter reminded us of the fact that Our Lady of Fatima had shown, in 1917 the shepherd children a vision of hell and that one of the prayers given to the seer children is: “O my Jesus, save us from the fires of Hell and lead all souls to Heaven, especially those in most need of Thy mercy.”

The event in Augsburg was titled “Does Peace Need the Churches?” Cardinal Marx and Bishop Bedford-Strohm – who are close allies and friends – had caused a controversy when they removed their crosses while visiting the Jewish Wailing Wall as well as the Muslim Dome of the Rock on the Temple Mount in Jerusalem in October of 2016. Many critics at the time saw that these two major Christian leaders in Germany seemed to lay down the cross in the very city where Jesus Christ had picked up His Cross. For one Jewish commentator, this action showed signs of “submission or self-denial.”

Cardinal Rainer Woelki of Cologne, another German cardinal, had just warned the Catholic Church not to adapt herself to the demands of the world. He said that the Church, adapting to the spirit of the age (zeitgeist) would make her lose her “prophetic mandate and mission” and would render her “of no use anymore.”

The Catholic Church in Germany is just about to start a German “Synodal Path” questioning the Church's teaching on female ordination, homosexuality, and celibacy. There are essentially two bishops left in Germany – Cardinal Woelki and Bishop Rudolf Voderholzer (Regensburg) – who publicly and strongly oppose this controversial synodal path that has even already gained some criticism from Rome. Voderholzer stated in May of 2019 that this synodal path might very well lead to a “path of destruction.”

Cardinal Walter Brandmüller had stated already in July of 2019 that “if one considers the statements of several bishops, then one can well say that this ‘synodal path’ leads to a catastrophe.”