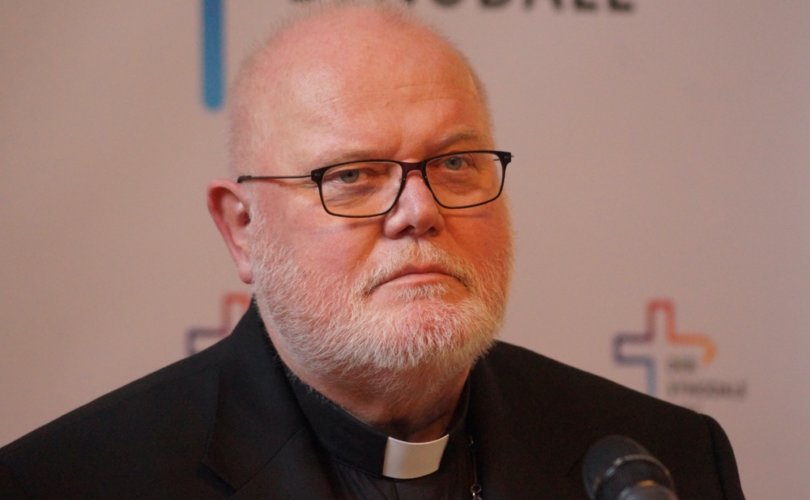 February 12, 2020 (LifeSiteNews) ­– Cardinal Marx's withdrawal from his leadership position in the Catholic Church in Germany might have a link to today's publication of Pope Francis' post-synodal exhortation of the Amazon Synod which does not explicitly endorse the German bishops' reform agenda concerning married priests and female deacons.

Many are surprised at yesterday's sudden declaration of Cardinal Reinhard Marx that he will no longer be available for a second term as the President of the German Bishops' Conference. Not many reasons are given except that he wishes for a younger bishop to take this position, that he himself would be 72 years of age at the end of his second term, and that he would like to concentrate on his work in his own Archdiocese of Munich and Freising.

Yet, this decision seems also symbolic for the whole state of affairs in the Catholic Church. Having been elected for six years as the German bishops' leader in 2014, Marx accompanied the pontificate of Francis in a very intensive manner. But, more importantly, Marx made this decision public only one day before the publication of the post-synodal exhortation of the Amazon Synod which was heavily influenced by the German bishops. The Amazon Synod was closely linked with the German Synodal Path that the bishops had started to prepare since March of 2019, discussing similar topics such as female ordination and the married priesthood. The German bishops had heavily funded the preparations of the Amazon Synod, thus hoping to change the Church in a fundamental manner. One German bishop – who himself was involved in the synod preparations – even claimed that “nothing will be the same” after the Amazon Synod.

As it turns out today, the Pope's post-synodal exhortation of the Amazon Synod did not fulfill the reform requests of the German faction: neither married priests, nor female deacons have found direct approval by Pope Francis. Several well-placed sources in Europe told LifeSite that Marx's withdrawal from the leadership role in Germany is linked to this new papal document.

It is to be expected that the progressive faction of the German bishops – and they represent at least two thirds of the German bishops – will be disappointed and even indignant at Pope Francis' final decision not to pick up fully on their reform agenda. It thus will also make the ongoing Synodal Path discussions harder, since they will likely lack the official backing of a papal document from Rome. The Synodal Path itself has already come under heavy criticism internationally, with Cardinal Gerhard Müller calling it “suicidal” and with Father Gerald Murray, S.J. asking Church authorities to “shut it down.”

While this disappointment for the progressive wing in the Catholic Church might not indicate a sudden change of mind on the part of Pope Francis with regard to his overall reform plans, this papal document can clearly be seen as a direct failure of Cardinal Marx and his own aggressive agenda. Thus, it can be seen as a slight rebuff, thus making it harder for him to remain the leading public face of Germany's reform agenda.

Let us first review Marx's involvement in the Bergoglian reform plans, but also these recent intense conflicts with Rome.

For example, the German cardinal was a leading figure behind the two Synods of Bishops on Marriage and the Family of 2014 and 2015 in Rome, which led to the post-synodal exhortation Amoris Laetitia (of April 2016) opening the door to exceptions to the rule that unrepentant adulterers may not receive Holy Communion. Working together with the retired curial Cardinal Walter Kasper, the German bishops had a strong influence over the synod debates and their final outcome, but also with the German bishops hosting a Day of Study ahead of the second family synod. Under Marx's leadership, the German bishops came out in February of 2017 with very liberal pastoral guidelines which essentially gave each couple in an irregular situation the permission to make, after a period of discernment with a pastoral counselor (not necessarily a priest), a “decision of conscience” whether or not they wish and intend to receive Holy Communion.

It was also under Cardinal Marx's rule that the Germans pushed for Communion for Protestant spouses of Catholics. In June of 2018, the German bishops published their guidelines which allowed some Protestant spouses of Catholics to receive Holy Communion, and this in spite of heavy criticism both from within the Church in Germany and Rome. It was finally Marx who spoke with Pope Francis in private and gained from him the now-famous “F.” signature that gave the Germans permission to go ahead with their controversial text, though not officially under their name, but, rather, as an “orientation guide.”

Next to these many controversial steps, Cardinal Marx, together with his Vice-President Bishop Franz-Josef Bode, promoted the idea of establishing a sort of blessing for homosexual couples in the Catholic Church. Under Marx's leadership, Professor Eberhard Schockenhoff delivered a talk to the German Bishops' Conference at their spring assembly in March of 2019, in which he pleaded for an acceptance of homosexuality. He then stated that homosexual relationships are to be “unconditionally accepted” and their sexual activity should not “be morally disqualified.”

The German “Synodal Path” that was approved by nearly all German bishops at that same spring assembly continues to follow Professor Schockenhoff's ideas. As LifeSiteNews's Martin Bürger reported, a preparatory document of the synodal path claims that “homosexual acts also realize positive meaningful values, insofar as they are an expression of friendship, reliability, loyalty and support in life.” Homosexuality, is not any longer to be considered as intrinsically evil. As Bürger adds: “A blessing of homosexual unions is not excluded by the working document.”

Just as with the debate about Communion for Protestant spouses of Catholics, also the Synodal Path provoked several corrective interventions on the part of Rome. Not only did Pope Francis write a Letter to the German Catholics reminding them of the importance of evangelization and of keeping the “sense of the Church,” two dicasteries also wrote letters to Germany, criticizing this reform process for overstepping competences that belong to the Universal Church and that giving laymen too much scope with regard to episcopal competences. Finally, however, Cardinal Marx came back from a visit with Pope Francis, saying that there is “no stop sign” for the German Synodal Path.

What will likely happen with the German Synodal Path, now that its leading representative and voice will leave its post? Professor Thomas Sternberg, the head of the lay organization Central Committee of German Catholics who co-sponsors the Synodal Path, is surprised about Marx's decision, yet still hopeful. He insists that Marx “will continue to play an important role” both as a German bishop and as a German cardinal. But even Sternberg has to admit that he was “sad” when he heard the news.

Much will depend on the next president of the German Bishops' Conference. Yet, it will be difficult to find someone as well connected in Rome, as powerful, and with a direct seat on the Pope's Council of Cardinals.

However, Cardinal Marx has also been controversial as nearly no other German bishop. His propensity to accommodate to the Zeitgeist of our time even led a group of German priests to call upon Cardinal Marx to resign. Here, we may list only a few examples:

In light of all these controversial and heterodox words and actions on the part of Cardinal Marx, one last thought comes to mind: after creating so much chaos, the leader of such disorder now leaves.