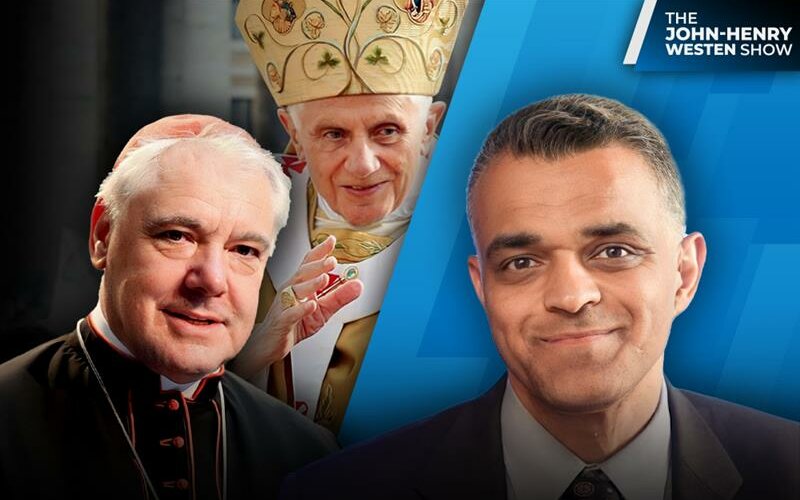 (LifeSiteNews) — Cardinal Gerhard Müller was gracious enough to sit down with me for tonight’s episode of The John-Henry Westen Show. We’re coming to you from Rome, in the former apartment of the then-Cardinal Joseph Ratzinger, which is where Cardinal Müller now lives.

On this episode, we discussed the great suffering of Pope Benedict XVI inflicted by his own brethren, the pain caused by Traditionis Custodes, the modernist forces within the Church and the future of the Church, the unjust laicization of Father Frank Pavone, and much more.

When I asked Müller about the suffering of Benedict XVI in the Church, he spoke at length about the radical ideologies that have surfaced since the French Revolution, describing them as forms of “gnosticism” and “neo-paganism.”

This is because Benedict, as a young boy in Nazi Germany named Joseph Ratzinger, had to confront a totalitarian, godless ideology that helped shape him as someone absolutely convinced in the salvation of Jesus Christ, “firm in the belief in God” and “very sure and firm in the faith,” as Müller put it.

“This was a very wise decision of Pope Benedict … to distinguish between the ordinary rite in the new form and extraordinary rite,” His Eminence said. “Also by underlining that the [Second] Vatican Council didn’t want to make a rupture in the continuity of the life of the Catholic Church and in the Catholic liturgy.”

Even though Pope Francis has acted “brutally” in suppressing a “legitimate plurality in the liturgical expression,” Cardinal Müller reminded us that the Church has “been in trouble” before and has come out on the other side of it.

“Nobody can say that Cardinal Müller has any doubt about the role of Saint Peter in the Church. I will not say that we have to accept all [of] what happened in the history of the papacy, problematic figures … Jesus is the only teacher in the Church, and the apostles, bishops are only teachers in the name of Jesus,” His Eminence said.

This provided me with a perfect segue into my next question, namely about the Vatican’s laicization of Father Frank Pavone, apparently at the hands of Francis himself.

Müller said he thinks the accusations against Pavone and his laicization were decidedly “political” in nature.

“Secularization [can only be] a penalty in the ultimate case, in the case of apostasy or through heresy or absolutely contradictory behavior against the priesthood. But the reasons he was presented are not … justifying the secularization,” he said. “I think there was truly a lot of pressure of the Democratic Party on those activists in abortion.”

“And also in the United States and other countries [those] who are denying openly the basics of the Catholic faith and morals … have no reactions from the side of the ecclesiastical authority. And those people who are fighting for life, against this brutal crime of killing of a person in the mother’s womb … Nobody has a right to destroy another life … This position [of] a right of women to kill their own babies … cannot be justified in any way,” His Eminence added.