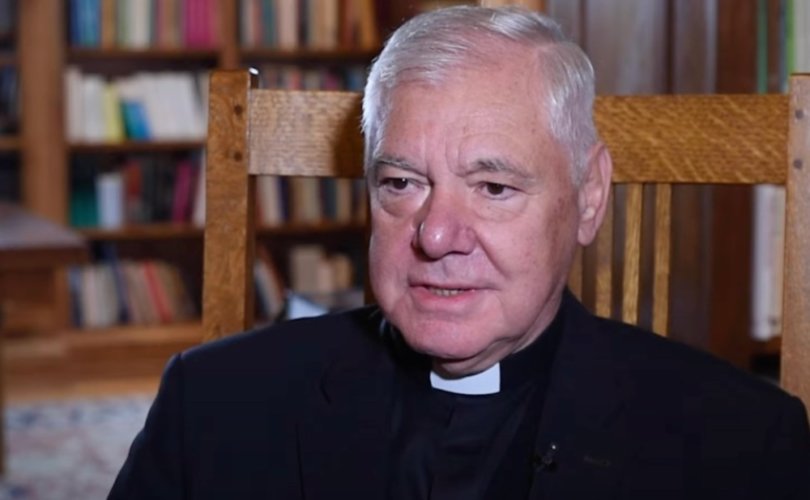 (LifeSiteNews) — Cardinal Gerhard Müller, the former head of the Congregation for the Doctrine of the Faith, has written a statement (see full text below) rebuking the Belgian bishops for their September 20 document approving homosexual relationships and offering them a liturgical blessing.

In the statement as sent to LifeSiteNews by the German cardinal, Müller describes this Belgian decision as being “heretical” and “diametrically opposed to the Word of God on marriage, the family and the creation of man as man or woman.”

As reported by LifeSite’s Jeanne Smits on September 20, the Catholic bishops of Flanders (the Dutch-speaking part of Belgium) published a document on that day in favor of “pastoral closeness to homosexual persons,” including suggestions for a public church blessing of same-sex “couples.”

Smits wrote that it “is likely the first time ever, worldwide, that a group of bishops has officially green-lighted such a public ceremony of blessing for a homosexual union as such, in direct contradiction to last year’s ban of such ‘liturgies’ by the Congregation for the Doctrine of the Faith.”

These bishops, therefore, explicitly oppose the Vatican’s recently re-affirmed teaching in this matter.

The statement of the Flemish bishops had been published on the website of the Belgian bishops, and Cardinal Josef De Kesel of Brussels personally signed it. De Kesel had been made the archbishop of Brussels in 2015 by Pope Francis, and then was elevated to cardinal a year later.

Archbishop Carlo Maria Viganò had yesterday issued a strong rebuke of the Belgian bishops, saying that “it is absolutely impossible to reconcile the teaching of the Gospel with the deviations of these heretics who abuse their power and authority as Pastors, using it for the very opposite purpose for which Christ instituted the Sacred Hierarchy in the Church.”

In his own new intervention, Müller insists that the bishops of the Church are “not above God’s Word,” but are to serve it and hand it down loyally. Therefore, the Belgian bishops’ public support of homosexual relationships (which includes a blessing) is a “formal transgression of competence with respect to the universal Church and a heretical opposition to the Revealed Truth of the Creator’s specific blessing (bene-diction) on the marriage of a man and a woman. (Gen 1:28).”

When speaking about the Revealed Truth of God, the German prelate also reminds us that it “is recorded unabridged and unadulterated by the Church in the ‘teaching of the apostles’ (Acts 2:42),” and that it “cannot be overcome, supplemented or corrected by any speculative or empirical science from the created reason of man.” But the Belgian bishops, on the contrary, are now “ obscuring the teachings of Christ and His Church.”

According to Müller, such actions on the part of the Belgian bishops are not pastoral care. The true pastoral care of the Catholic Church “has the task of leading people to God in the way of Christ, the Good Shepherd.”

“This includes the invitation to overcome, with the help of grace, our selfish inclinations and temptations to sin, and to live a life as it is pleasing to God and therefore also as it is good for us and makes us happy in God (cf. Rom 12:2),” Müller added.

“Abiding in the Spirit of Truth” (Jn 14:17). A fraternal correction of the bishops of Flanders/Belgium.

The Flemish bishops published a statement on pastoral care for homosexual persons on September 20, 2022. They also propose a kind of liturgy with prayers of blessing for persons of the same sex living together in marriage. They think they can refer to the Apostolic Exhortation Amoris laetitia by Pope Francis. In doing so, they take the highest teacher of the Church as a crown witness for a so-called inclusive pastoral ministry without turning away from sin. Such an approach, however, is diametrically opposed to the Word of God on marriage, the family and the creation of man as man or woman. However, the well-meaning intention to emphasize the unconditional dignity of each individual human being, regardless of his or her right or wrong behavior, is reversed by the blatant contradictions against the hermeneutical principles and the contents of the revealed faith of the Church.

The magisterium of the Pope, ecumenical councils, or regional episcopal assemblies “is not above the Word of God, but serves it, teaching nothing but what has been handed down, because it hears the Word of God with reverence by divine mandate and with the assistance of the Holy Spirit, keeping it holy and interpreting it faithfully, and because it draws from this one treasure of faith all that it proposes to believe as revealed by God.” (Dei verbum 10; cf. Lumen gentium 25). Thus, the declaration of the Flemish episcopate and similar efforts in other parts of the world is a formal transgression of competence with respect to the universal Church and a heretical opposition to the revealed truth of the Creator’s specific blessing (bene-diction) on the marriage of a man and a woman. (Gen 1:28).

2. The intimacy of eros, sexus and agape comes in the order of creation and redemption according to God’s Holy Will only to a man and a woman who have freely given each other the yes-word both for the whole life and under all circumstances.

The authority of God revealed in Jesus Christ must not be relativized and broken down according to the passing religious wisdom and philosophical insights of “the authoritative people” (Karl Jaspers) of world history. For Jesus Christ is the eschatological Revelation of God in person. In the Logos made Flesh all Truth of God is contained. The Revealed Truth of God, which is recorded unabridged and unadulterated by the Church in the “teaching of the apostles” (Acts 2:42), cannot be overcome, supplemented or corrected by any speculative or empirical science from the created reason of man. And that is why only the Son of God and the only Savior of the world could go back beyond the pragmatic adaptations (of the “Pharisees” then and now) to the weaknesses of fallen human nature to the original will of the Creator for the marriage of man and woman. The Son of God, who alone knows the Father and reveals His Will to us (cf. Mt 11:27; 28:18-20), reminds us of the nature of marriage with the characteristics of monogamy, indissolubility, and openness to the children given to them by God. Only a man and a woman can become “one flesh” (cf. Mt 19:6). And only He could elevate marriage to the sacrament of the New Covenant, which participates in and signifies the unity of Christ and the Church in real terms (cf. Eph 5 21-32; 1 Cor 7:39; Heb 13:4).

So the Flemish bishops, by bringing homosexual partnerships closer to the marriage of man and woman instituted by God, are obscuring the teachings of Christ and His Church. They go behind the renewal of man through Christ our Savior. They capitulate to the logic of the old world, which wants to pragmatically limit the consequences of the Fall only according to human reasoning, instead of “putting on the New Man, created in God’s image in true righteousness and holiness.” (Eph 4:24). Both the pagan world before Christ and the world of today, which does not know Christ (Rom 1:26-32) or has fallen away from Him again, or the Christians who make a lazy compromise with it, relativize the uniqueness of the marriage of man and woman. They betray its dignity by degrading the marriage of man and woman as being one among arbitrary forms of togetherness and satisfaction of sexual desires.

3. The pastoral care of the Church has the task of leading people to God in the way of Christ, the Good Shepherd. This includes the invitation to overcome, with the help of grace, our selfish inclinations and temptations to sin, and to live a life as it is pleasing to God and therefore also as it is good for us and makes us happy in God (cf. Rom 12:2).

The Flemish bishops, on the other hand, mislead the people entrusted to their pastoral care who are affected by homoerotic inclinations, as well as their parents and acquaintances. For they offer them, to soothe their consciences, an alleged “prayer of blessing” for same-sex partnerships, like a kind of placebo, which awakens in them the illusion that homosexual acts or sexual contacts outside marriage are alright before God and not a grave sin like other transgressions against the 6th and 9th commandments of the Decalogue (cf. Rom 1:26f; 1 Cor 6:9). Genuine pastoral care is concerned about the individual human being in his hopes and needs, his possibilities and failures, and is not blinded by the false appearance of political ideologies and anthropological heresies that promise salvation but plunge millions into misery.

4. In this time of confusion, which affects even the pastors and teachers of the Church, every bishop should meditate on the word of the Apostle [St. Paul] to his collaborator and successor Timothy, which also applies to him and becomes a judgment: “I adjure thee by God, and by Christ Jesus, the coming Judge of the living and the dead… Preach the word, stand up whether convenient or inconvenient… For the time will come when men will not endure sound doctrine, but will seek teachers according to their own lusts, to tickle their ears. . But be sober in all things, endure suffering, do your work as preacher of the Gospel, faithfully fulfill your ministry.” (2 Tim 4:1-5).

Translation of the original text was provided by LifeSite’s Dr. Maike Hickson.