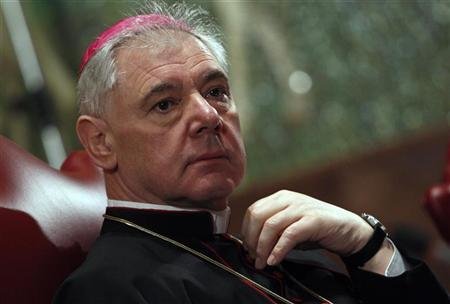 (LifeSiteNews) — In a yet unpublished manuscript given to LifeSite, Cardinal Gerhard Müller, the former head of the Congregation for the Doctrine of the Faith, insists that the Catholic Church not lose sight of her supernatural mission, pointing to the “uniqueness and salvific universality of Jesus and the Church.” He also discusses the coronavirus and its dangers, saying it is indeed “dangerous,” but that “mortal sin is much more dangerous.”

The coronavirus, he explains in the manuscript, “is not the only challenge to mankind,“ and here he points to the dangers not to the body but to the soul and its eternal salvation. After pointing out the dangers of mortal sin, this German cardinal adds that “the forgiveness of our sins in the Sacrament of Penance is a divine vaccine with 100% guaranteed efficacy, forgiveness and the reward of eternal life.”

With these words, the former professor of dogmatic theology points to the need to think in supernatural terms rather than political or natural ones. Cardinal Müller has recently received the “Great International Golden Lion of Venice” award for peace. He is involved in the newly founded Dominus Jesus Foundation, which aims at exactly that: the promotion of Jesus and His Church as the arc of salvation.

He writes, “The DOMIINUS IESUS Foundation is non-profit and pursues religious purposes aimed at spreading the culture and doctrine of the Roman Catholic Church in the world.” “In particular,” he continues, “it promotes the uniqueness and salvific universality of Jesus and the Church according to the principle by which the Lord Jesus, before ascending to heaven, entrusted His disciples with the mandate to proclaim the Gospel to the whole world and to baptize all nations.”

Here, the cardinal quotes the Gospel: “Go into all the world and preach the Gospel to every creature. Whoever believes and is baptized will be saved, but whoever does not believe will be condemned” (Mk 16:15-16); “All power in heaven and on earth has been given to Me. Go therefore and teach all nations, baptizing them in the name of the Father and of the Son and of the Holy Spirit, teaching them to observe all that I have commanded you. Behold, I am with you always, until the end of the world” (Mt 28:18-20; cf. also Lk 24:46-48; Jn 17:18; 20:21; Acts 1:8).

Cardinal Müller hopes “with God’s help that we can reach as many people as possible by working on various projects.”

Moreover, the former Prefect of the Congregation for the Doctrine of the Faith (CDF) speaks about the priorities of the Church in this historical moment. “In spite of the technical-digital progress and globalization, the Church must explain what is the meaning of human existence,” Cardinal Müller goes on to say, quoting the Second Vatican Council: “Behold, the Church believes that Christ, who died and rose again for all, gives man light and strength through His Spirit, so that he may respond to his supreme vocation; nor is there any other name on earth given to men by which they may be saved” (Gaudium et spes 10).

The German prelate also dwells on the important role of the bishops of the Catholic Church who should not “devote themselves to environmental and nature issues by substituting themselves for politicians,” but instead, they should “commit themselves to the ‘religious climate.’” The Pope himself, he adds, has the mission of “gathering all Christians in the confession of faith: saying to the Lord, ‘You are the Christ, the Son of the living God.’” (Mt 16:16). “The Church needs the Pope as the Vicar of Christ,” he adds. This role is “1,000 times more important” even than being “an interlocutor of ambitious politicians and pseudo-philosophers or of some journalists who just want to sell their interviews better by putting their name in plain sight,” Müller insists.

Returning to the topic of the mission of the bishops, Cardinal Müller wishes that they are not “courtiers who flatter the prince.” In addition, they are “constituted by the Holy Spirit (Acts 20:28)” and are “not employees of the Holy See.” “They have a responsibility to Christ as His representatives and not as delegates of the Pope.”

“True Catholic bishops,” the prelate continues, “do not submit themselves to public opinion but give testimony to the ‘sound doctrine’ of the Gospel of Christ, strengthened by the power of the Holy Spirit.” By quoting the Letter of Timothy, Cardinal Müller reminds us that the bishops are to “avoid profane fables,” and that they have to put their hope “in the living God, who is the Savior of all men, but especially of those who believe.”

Further resisting the ongoing secularization of the Catholic Church, Cardinal Müller tells us that the Church “is not and cannot become a NGO, a religious-social organization towards an earthly paradise, which must fail, but rather a living organism, the Body of Christ, of which He is the Head and Universal Savior.”

Here, the German theologian touches upon the Synod on Synodality that just has been started by Pope Francis, when he states that “men cannot reform the Church or build a new one according to their own pleasure, but it is God Who reforms us, renews us, so that we are good Christians, living members of His body (ecclesial through the sacraments).” “Christ is the Head,” and all of the Church’s bishops (to include the “bishop of Rome”) are merely “His servants.” “No one can lay a foundation other than what is already there, which is Jesus Christ” (1 Cor 3:11), Cardinal Müller insists.

“This divine word should be the maxim of the next synod on synodality.”