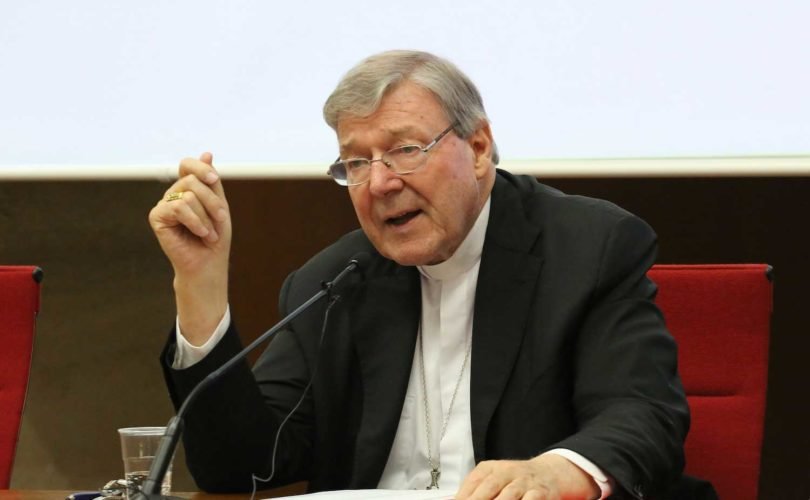 April 7, 2020 (LifeSiteNews) – After 405 days in prison, Cardinal George Pell has finally been freed after the High Court of Australia overturned his convictions for sexual abuse of a minor.

The seven judges sitting on the High Court were, remarkably, unanimous, and delivered a single, two-page explanation of their decision. They pointed out that the jury and the Appeal Court had failed to acknowledge the force of the ‘opportunity witnesses’, who had testified that the abuse could not have taken place at the times and places alleged because, among other things, Pell would either have been elsewhere or surrounded by people. However convincing the testimony of the accuser, this other testimony introduced ‘reasonable doubt’, making conviction impossible.

There was, after all, no other evidence against Pell.

Finally, Australia’s most senior judges have said what many people have been saying ever since the original conviction 13 months ago: that the thing was absurd. Judges and juries inevitably have their limitations, but this goes beyond the normal range of human error. It is not difficult, however, to see why it happened. The police, the jury, and two of the three Appeal Court judges were clearly influenced by the hysterical anti-clerical and anti-Catholic mood of most of the Australian media, and in the State of Victoria important legal safeguards had been deliberately set aside in order to facilitate the conviction of abusers.

Georges Weigel has compared the case with the unjust conviction of the French artillery captain Alfred Dreyfus in the late 19th century. There is something in this. Dreyfus’ conviction for treason was partly motivated by anti-Semitism, and attempts to uncover the truth were for a time thwarted by the strength of public feeling. When the judicial system becomes a mechanism for confirming public prejudices, justice will not be well served.

In another way, the parallel is more complex. Dreyfus became a symbol for opposing forces: on the one side, the political conservatives who dominated the French Army, supported by many Catholics; on the other, radical followers of the French Revolution. The hatred of the latter for the Church made the outcome of the affair something of an existential struggle for the Church. Tragically, the Catholics had chosen the wrong side. Dreyfus was innocent, apparently convincing evidence was shown to have been forged, and when Dreyfus was finally exonerated, the ascendant Radicals began a serious persecution of the Church, expelling religious orders and seizing Church property.

George Pell, too, has become totemic for many people, a symbol of the Church which can either be vindicated or crushed in relation to the child sex abuse scandal. He fitted the role particularly well because he is seen as a politically conservative figure. As I have pointed out before, liberal opponents of the Church have been very concerned to maintain the narrative that the sex abuse scandal is about abusive conservative Catholics with their hypocritical support for the traditional teaching of the Church on sexuality. For a long time, prelates, who were identified as in some sense ‘conservative’ (sometimes using a fairly elastic definition), were picked out for publicity, and liberal prelates ignored. The narrative finally collapsed in the USA with the disgrace of Cardinal McCarrick, but the Pell case gave Australian liberals the hope that they could keep it going for a bit longer in their own country.

This gives the Pell case enormous significance. The baying mob on Twitter will, perhaps, go to their graves convinced that Pell is guilty, but their leaders in the media and Australian institutions, including the Victoria police and the judiciary, will realize that they have over-reached.

Much remains to be done, in Australia as in other countries, to get to the bottom of clerical sexual abuse, but the collapse of the simplistic narrative of nasty conservatives and good liberals should make it easier to see what is really going on, and to see the parallels between abuse in the Church and abuse in other institutions. Revelations of the abuse of minors by revered senior people in the BBC and the Church of England over the last decade has done much, in the UK, to silence the absurd knee-jerk response to every story about abuse in the Church, that it flows from clerical celibacy. Australia will have to go through its own process in coming to terms with the ugly reality.

Catholic bishops in Australia have been implicit in abuse in very much the same way as those in other countries: overwhelmingly, by not taking accusations seriously, and moving abusive priests to new parishes when rumors became hard to ignore. Only time will tell if a major abuser like McCarrick or Rembert Weakland will emerge there, but Pell is certainly not the man. The toleration of abuse is serious and it is infuriating, but it makes for less juicy headlines and only occasionally crosses into criminal territory. Nevertheless, it is in this more hazy area that much real work within the Church remains to be done.