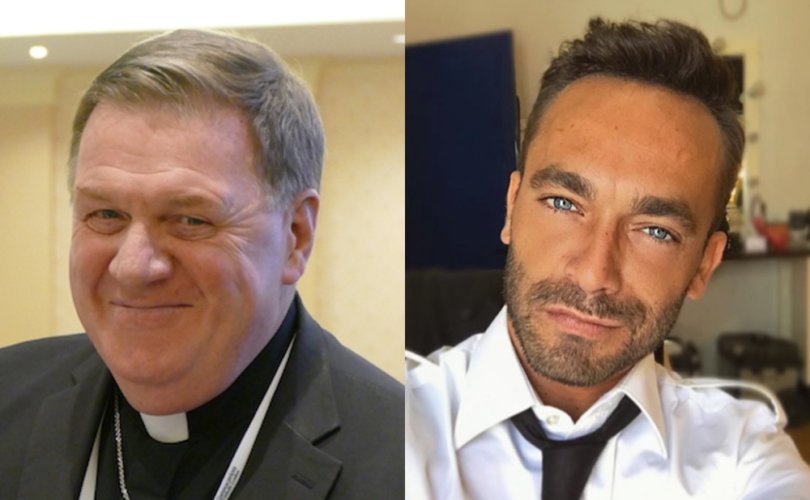 NEWARK, November 28, 2018, (LifeSiteNews) – Newark’s Cardinal Joseph Tobin is in the limelight again after having reportedly confirmed rumors he recently housed in his rectory a young Italian actor for a period of time.

The Pope-Francis-appointed Cardinal admitted to American Spectator’s investigative reporter George Neumayr Nov. 15 that he “temporarily” housed in his rectory the movie star while the actor improved his English at a nearby school.

Speculations are now abounding that 36-year-old Francesco Castiglione — who runs an Instagram account with hundreds of shirtless ‘beefcake’ poses —  may have been the intended recipient of Tobin’s “nighty-night, baby. I love you” tweet from earlier this year. Tobin quickly deleted the tweet and apologized, saying it was meant for his sister.

Neumayr wrote that he approached Tobin just as the U.S. bishops Fall Assembly in Baltimore was wrapping up, and asked him about the Italian actor.

“I wanted to ask Tobin about a story I broke in October: that an Italian actor, Francesco Castiglione, was living in his rectory, which had caused murmuring among concerned Catholics in his archdiocese of Newark, New Jersey,” explained Neumayr in his report, adding: “Some of those concerned Catholics had called me, suspecting that Castiglione was the real recipient of Tobin's infamous accidental tweet from last February in which he declared to someone unknown, ‘Nighty-Night Baby, I love you.’  An embarrassed Tobin had explained away the Twitter misfire as a late-night message to one of his sisters.”

“Was Castiglione living at the rectory until I reported it?” Neumayr said he asked the Cardinal. “Tobin responded that, yes, Castiglione was living at his rectory ‘temporarily.’  I asked him why.  He said that Castiglione was taking ‘language classes’ at Seton Hall.  Asked why he would provide temporary housing to a random Seton Hall student, Tobin couldn't offer an explanation.”

Tobin’s admission prompts more questions. For instance, out of all the students attending English language classes at nearby Seton Hall University, why was this one man singled out for the privilege of living with an American Cardinal?

“Was Castiglione the real recipient of the 'Nighty-Night Baby' tweet? Tobin stuck with his story about sending it to a family member. 'I sent that to my sister,' he said. I asked him if she could provide proof of that. That didn’t go over well. 'I don’t have to prove anything to you,' he said, as he started to walk away from me.”

Tobin, the Archbishop of Newark, has personally welcomed an “LGBT pilgrimage” to his cathedral. He was named in Archbishop Viganò's testimony on Pope Francis' covering up for McCarrick as rising to power outside normal processes. Viganò linked Tobin's appointment to McCarrick. “The appointments of Blase Cupich to Chicago and Joseph W. Tobin to Newark were orchestrated by McCarrick, Maradiaga and Wuerl, united by a wicked pact of abuses by the first, and at least of coverup of abuses by the other two,” Archbishop Viganò said.

Catholic pundits are also questioning why a successful movie star stayed with the Cardinal during his English lessons instead of renting his own apartment.

“Was the man who's widely believed to be the next cardinal for the Washington archdiocese, Cardinal Joseph Tobin of Newark, bunking with a houseboy?” asked American Thinker’s Monica Showalter.

Was a sexy Italian actor living with the man who would be Washington's new cardinal? https://t.co/Z5ur4SI0JK

Occurring amid the cascade of stories of homosexual activity and predatory behavior by priests and prelates, the optics are horrible.