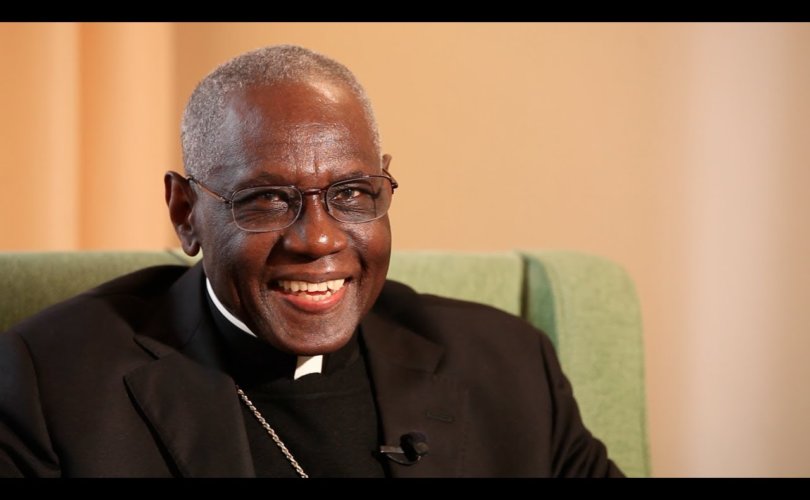 April 8, 2019 (LifeSiteNews) – Cardinal Robert Sarah said that Catholics have a “duty” to evangelize and that bringing the unbaptized to Christ is an “urgent task” for the Church. The prefect of the Congregation for Divine Worship and the Discipline of the Sacraments made these comments when asked how Catholics should convert others without resorting to “proselytism as denounced just recently by Pope Francis.”

Last week, Pope Francis asked Christians in Morocco not to actively seek converts to their faith, saying that the “paths of mission are not those of proselytism.” The Pope did not explain what he meant by “proselytism.”

Cardinal Sarah was asked by Aleteia in an April 5 interview, “How can we convert without resorting to proselytism as denounced just recently by Pope Francis during his trip to Morocco?” He responded that the Church has been given a “mandate from Jesus: 'All power has been given to me in heaven and on earth. Go therefore and make disciples of all nations, baptizing them in the name of the Father and the Son and the Holy Spirit, and teach them to observe what I have commanded you. And behold, I am with you until the end of time.'”

“The Church cannot avoid this urgent task,” he added.

The African prelate went on to quote St. Paul on the subject: “'Woe to me,' said Saint Paul, 'if I do not evangelize.' This is what missionaries did in Africa, and on other continents. In their first contact with people, they immediately presented the Gospel and its demands, without ever forcing anyone. I do not know of any missionary who has forced a people to become Christian. But evangelizing is a duty.”

Cardinal Sarah stated that Jesus is the “only way to salvation.”

“Whether it is Muslims, Buddhists or animists, we must evangelize everyone by proclaiming Jesus Christ, because he is the only way to salvation, so it is not proselytism, because we do not force pagans or Muslims with weapons, but offer them the way to salvation. Our religion is based on love and banishes violence,” he said.

In Morocco, it is forbidden for a Muslim to become Christian, and this is what is often referred to as proselytism. As the New York Times explains, the Moroccan authorities “do not recognize Moroccan converts to Christianity and many of those worship secretly in homes. Conversion from Islam to Christianity is banned – as it is in many Muslim countries – and proselytizing is punishable by up to three years in prison.” According to this, Pope Francis rejecting proselytism could be interpreted as not encouraging Catholics to evangelize – a word he did not even use in his March 31 speech. His concept of the Church's mission, as it seems, means being friendly to one's neighbors and being a good example and thus – like the yeast – indirectly inviting people to join the Catholic Church. Thus he also ambiguously stated: “For Jesus did not choose us and send us forth to become more numerous! He called us to a mission.”

Some observers try to explain that Pope Francis rejects with his words against proselytism the idea of forcing people to convert or to impose one's own power. Cardinal Sarah, however, responds to this claim when he says that “I do not know of any missionary who has forced a people to become Christian. But evangelizing is a duty.”

In light of the confusing message Pope Francis has sent out into the world with his March 31 speech, Cardinal Sarah's words on the internal “division” in the Church may be helpful, as well. He states in his new Aleteia interview that “what is tragic is the division within the Church. A division that manifests itself mainly on doctrinal, moral, and disciplinary levels. Everyone now says and thinks what they [sic] want. How could we not be concerned if it seems that the Church no longer has doctrine or clear moral teaching?”

In light of this current confusion, the prelate recommends that Catholics “hold on to the boat [the Church] firmly, and pray. In other words, it is our responsibility to stand firmly by the Doctrine, the teaching of the Church, and to pray.”