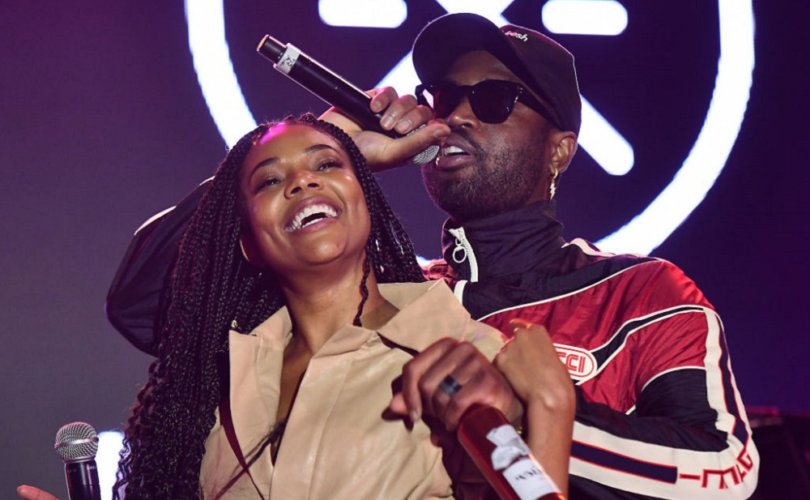 February 12, 2020 (LifeSiteNews) — If the transgender phenomenon is, as Dr. Lisa Littman concluded, a peer contagion, then it is difficult not to conclude that the steady trickle of celebrities coming out to normalize transgenderism is a dangerous trend, indeed.

As I noted earlier this year, Charlize Theron has made headlines for deciding to raise her son Jackson as a girl — and now another celebrity is coming out to announce that his son is now a girl. This time, it is 13-time NBA All-Star Dwyane Wade and his Hollywood actress wife, Gabrielle Union.

Dwyane Wade told TV host (and LGBT icon) Ellen DeGeneres that his twelve-year-old son, who was originally named Zion, came home one day and informed his parents that he now believed himself to be a girl. According to Wade, the boy dropped the news pretty bluntly: “Hey, so I want to talk to you guys. I think going forward, I’m ready to live my truth. And I want to be referenced as she and her. I’d love for you guys to call me Zaya.”

Wade and Union promptly agreed to the name change and set about trying to figure out what was going on. To the fawning approval of major LGBT organizations, Union tweeted a “Huge huge huge THANK YOU to everyone whose dms I slid into, friends & family who provided information, resources, love & encouragement. We are humble LGBTQ+ allies with ALOT to learn & grateful for the support. We encourage yall to check us as needed. Again, thank you!”

Wade echoed that sentiment to DeGeneres: “That was our job, to go out and get information, to reach out to every relationship we have. My wife reached out to everybody on the cast of ‘Pose,’” Wade said, “We just tried to figure out as much information as we can to make sure we give our child the best opportunity to be her [sic] best self.” Pose, in case you’re wondering, is a TV series described as “an American drama television series about New York City’s African-American and Latino LGBTQ and gender-nonconforming ballroom culture scene.” It isn’t too hard to figure out what sort of parenting advice they might offer.

Having a trans child, Wade told DeGeneres, has given his family the opportunity to be social leaders. “Once Zion came home and said, ‘Call me Zaya,’ and ‘I’m ready to take on this,’ I looked at her and said, ‘You are a leader,’” Wade said. “It’s our opportunity to allow you to be a voice. Right now, it’s through us, because she’s [sic] 12 years old, but eventually, it will be through her [sic]. … We are proud parents of a child in the LGBTQ+ community and we are proud allies as well.”

Ellen DeGeneres, unsurprisingly, found the parental decision to support a son’s desire to be raised as a girl nothing short of inspiring: “What every parent should be doing is what you’re being now — which is unconditionally loving your child and supporting your child in whoever they are.” Of course, “whoever they are” is now an extraordinarily fluid category with serious consequences if so-called “sex change” treatments are pursued, but that’s beside the point. Parents no longer lead their children — they are led by them. This, as Matt Walsh pointed out over at the Daily Wire, will have serious consequences for the children in the years ahead.

Celebrities, unfortunately, have a lot of cultural power when it comes to pushing fringe behaviors into the mainstream, especially considering the fact that they feature in much of modern storytelling. To cite another example, Nikkie de Jager, the YouTube makeup artist superstar with thirteen million followers, also recently came out as transgender, revealing that he is a man — and his video revealing his “transition” racked up more than 32 million views. De Jager has now been asked to star as the online presenter for the next Eurovision song contest.

The normalization of transgenderism is being pushed from the top down, from the elites to the rest of us, and we do not yet know if the inevitable backlash that will accompany the brutal consequences of this social experiment will be sufficient to roll back the tide of gender insanity that is seeping rapidly through our institutions. Time will tell. In the meantime, adults affirming the confusion of children is applauded on daytime TV is our culture’s new normal.

Jonathon’s new podcast, The Van Maren Show, is dedicated to telling the stories of the pro-life and pro-family movement. In his latest episode, he interviews Joseph Pearce, biographer of Aleksandr Solzhenitsyn, the renowned Russian novelist, political prisoner, historian, and philosopher. Pearce shares his stories of Solzhenitsyn, with whom he became close, and his wisdom that may help save society. You can subscribe here and listen to the episode below: