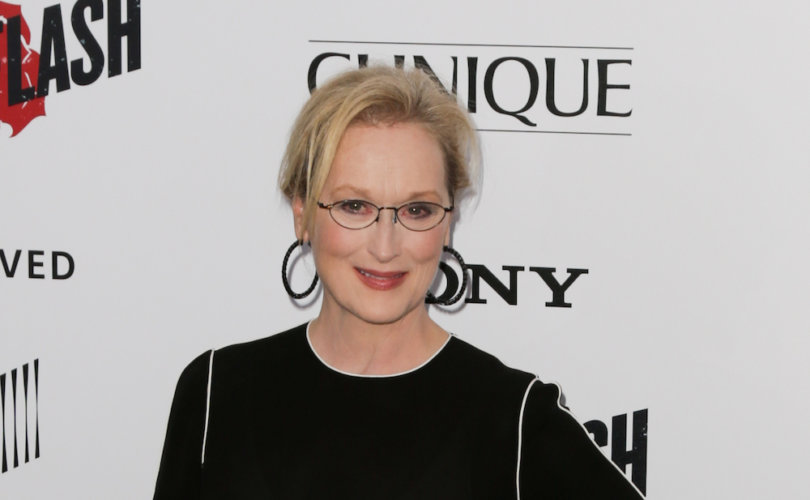 January 9, 2017 (LifeSiteNews) – There was no shortage of irony as Hollywood liberals used Sunday night's Golden Globes to flaunt their pro-abortion, anti-Trump views.

Mozart in the Jungle actress Lola Kirke wore a “F*** Paul Ryan” pin on her dress to show her support of Planned Parenthood, the nation's largest abortion provider. Ryan has promised to remove its government funding as part of a fast-tracked anti-Obamacare bill.

She told Yahoo! Style, “As a person with a platform, no matter what size that is, it’s important to share your views and maybe elevate people who might agree with you. My body, my choice. Your body, your choice.”

(If your size is younger than nine months old, you don't really count.)

Tracee Ellis Ross, who won Best Actress in a TV comedy series for her role in ABC’s Black-ish, said she wanted to “hock” the jewelry she wore and “give all the money to Planned Parenthood and the ACLU.”

Meryl Streep went on an almost six-minute anti-Trump rant during which she accused him of being an unwelcoming bully.

“It kind of broke my heart” to see Trump appear to mock a disabled reporter, Streep said. “When the powerful use their position to bully others, we all lose.”

Conservatives were quick to point out the irony of an elite celebrity making such a statement.

“When the powerful use their position to bully others, we all lose,” said Meryl Streep during term of POTUS who made nuns buy birth control.

Meryl Streep talks about bullying. She should ask her friends in Hollywood, who are more than happy to ban conservatives.

The hypocrisy of an abortion supporting celebrity lecturing us on respect for disabled. They abort the disabled. #MerylStreep #GoldenGlobe

Meryl Streep whines about empathy and lacks any for those she denigrates. #GoldenGlobes

You can find hypocrite #MerylStreep in that crowd. What a bunch of monsters. https://t.co/ZvlOrp4fqD

Streep, who advocates for abortion and gave $113,000 to Democrats in four years, decried Trump for having mocked “someone he outranked in privilege, power, and the capacity to fight back.”

Born humans outrank pre-born humans in privilege, power, and the capacity to fight back – but don't expect Hollywood to suddenly start pointing that out.