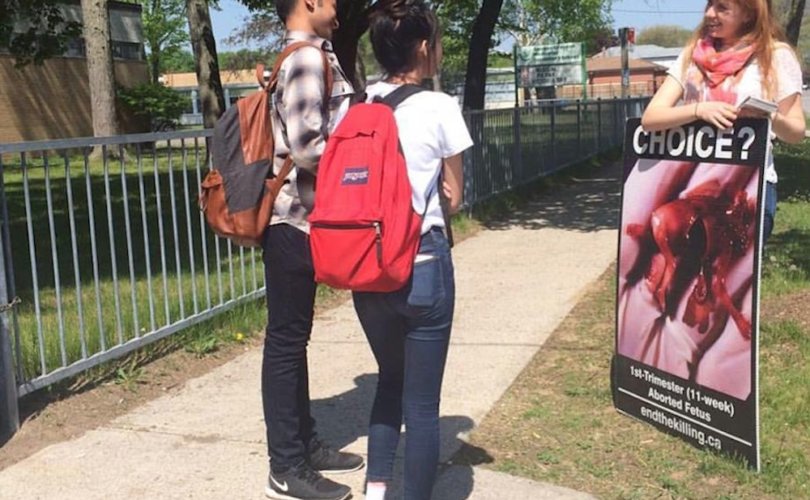 July 11, 2016 (LifeSiteNews) – It was hot. Really hot. After three hours of running up and down neighborhood streets to deliver postcards that expose the brutal reality of abortion, it felt even hotter. I was sweaty, tired, and wanted nothing more than to go home and take a cold shower. And it wasn’t even lunchtime yet. At this point, doing a Choice Chain was the last thing I wanted to do. Someone has to show the truth about abortion, I thought to myself, in a desperate attempt to prepare for the next two hours. It didn’t work. I was still tired, still hot, and I still really wanted to go home. And yet, my stubborn Ukrainian pride wouldn’t let me give up that easily. I was going to get through this choice chain if was the last thing I did.

So I grabbed my sign, walked to my station on the other side of our designated intersection, plastered on a smile, and started asking people what they thought about abortion.

But then he stopped. The young man wearing a fedora and glasses that looked like they belonged to John Lennon. He looked at my sign, then at me, then back at the sign.

“What do you think about abortion?” “It’s a woman’s choice,” he said, but his eyes kept drifting to my picture of a 10-week aborted fetus.

I could literally see the wheels turning in his head.

Finally, someone who doesn’t pretend I don’t exist when I ask them about one of the biggest injustices in our culture. The word “choice” glamorizes a process that rips apart a human being before he gets a chance to exit his mother’s womb. Abortion is part of everyday life — “fixing” a mistake. Escaping the consequences.

I had about thirty seconds to explain this. To show this young man that abortion is a direct attack on the fundamental human rights of every single person — born or not.

“Can I ask you a question?” I said. “Do you believe in human rights?” He looked at me like I had just asked the stupidest question on the face of the earth. “Of course,” he said matter-of-factly, and kind of looked around, probably wondering how he could make his escape to the other side of the intersection. “I do too!” I said excitedly, trying to keep his attention.

He gave me a puzzled look. I took this as permission to keep going. “So who gets human rights?” I asked him, cracking a tentative smile. He smiled back, “People get human rights.”

“Great! I said, and if something’s growing, that means its alive, right?” The human rights argument is easily the simplest argument in pro-life apologetics, but this third question always makes me feel like an idiot. Nevertheless, he agreed with me, and so I whipped out the last few points to close off my little speech. “So if we’re talking about a living thing, that has two human parents, doesn’t that mean that abortion is a human rights violation?”

Bam. Mind blown. He looked at me, stunned. “I totally agree with you!” he said. “And there’s no situation that would justify having an abortion?” “Nope!”

“Why did you pick abortion? What about all the other problems in the world? Like why aren’t you fighting trans-phobia?” Never heard that one before. He looked at me with the tiniest of smirks, probably thinking he got me stumped. And he was right. I stared at him, and would have probably kept staring at him for a good five minutes were it not for the grace of God.

And somehow, I started talking. “It’s all interconnected,” I said. “Once we get into this mindset that views those who are less developed, smaller — in other words, different — as less than human … ”

It was at this moment that something clicked for this young man. No longer was he pro-life because logic compelled him to, but he was pro-life because it lined up with something he was extremely passionate about. “Just like the fetus!” He exclaimed. “Exactly!” I said, “If we think that the fetus isn’t human because it’s different, than we can easily think that transgendered people aren’t human. And that’s how it connects to abortion.”

I answered it right.

And in that moment I realized that we are not fighting a losing battle. Abortion is one of the worst evils in our world today, but God is on our side. If I had decided not to do choice chain that day, then I would have never met the young man with the fedora and round glasses. We would never have talked, and perhaps he would never have changed his mind about abortion.

And this is why I do what I do. In the minutes leading up to this particular choice chain, I selfishly thought of myself, my own comfort. I forgot about the aborted children who would never experience a hot day in the middle of summer, would never enjoy a cold glass of water or an ice cream from McDonald’s. They were murdered. Torn apart behind closed doors, and no one stopped to think twice about it.

No matter how tired we are, no matter how hopeless we feel, we cannot give up. We cannot forget the millions of pre-born children whose lives were thrown away with the trash. A young man changed his mind about abortion. We are making a difference.