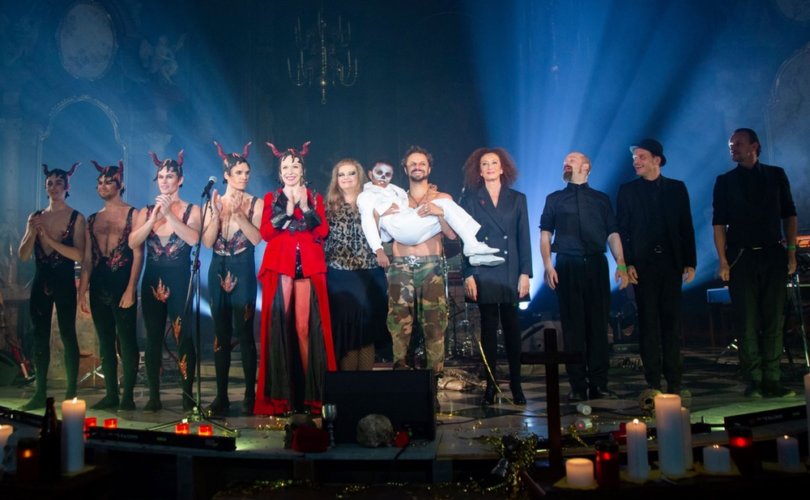 December 4, 2018 (LifeSiteNews) – Cardinal Christoph Schönborn is facing criticism for allowing and attending an event in his Vienna cathedral featuring a shirtless, pro-homosexual actor standing on the altar rail, loud rock and electronic music, and actors dressed as demons.

Father Johannes Maria Schwarz, an Austrian priest, published an article today on the website Kath.net commenting on the November 30 World AIDS Day charity concert that took place in Cardinal Christoph Schönborn's St. Stephen’s cathedral. While the money ostensibly went to a good cause – an HIV hospice in South Africa – Father Schwarz sees that this house of God, “the heart of Catholic Vienna,” is being turned into a “multipurpose hall.” The event might well show “the death of a feeble Church,” he commented.

Cardinal Schönborn, the Order of Malta, and Gery Keszler's LGBT Life Ball – who last year organized a charity event for HIV patients that drew much criticism – hosted the event. Part of the event was the performance in the cathedral of a play written by Hugo von Hoffmansthal, but in a “reloaded” way, with loud electronic and rock music. Philipp Hochmair – a well-known Austrian actor who already has played various roles on stage nude and who has also played homosexual roles in different pro-LGBT movies – was the main actor of that “Jedermann reloaded” performance, together with his band God's Electrohand (Elektrohand Gottes).

In pictures, he is shirtless, standing on the altar rail. The concert was loud, with flickering lights, and many actors were dressed as demons. The Jedermann (Everyman) play depicts a wealthy man in his last hours of life who realizes that neither his friends nor his money follow him into death. He then converts to Christianity. The organizers proudly stated afterwards that they solicited and received 68,000 euros in donations.

However, for Father Schwarz, the good cause of this concert is not enough to justify the fact that it was performed in the house of God.

“I am ashamed of my Church in this and in other questions,” he writes. “We do not fear the Almighty anymore! Nothing is anymore holy for us! We trample upon the souls that are entrusted to us!” There would surely have been another way of promoting the “great initiative of Father Gerhard Lagleder,” who works with HIV patients, Father Schwarz politely adds. Moreover, Schwarz saw that Hochmair the actor was dancing on the communion rail, “with a bottle of beer(?) and microphone” in hand, with Cardinal Schönborn observing from the first row.

The communion rail is an “extension of the altar,” Schwarz pointed out.

“Did one now really forget the significance of the altar rail?” he asks. “Also at St. Stephens' Cathedral? That is to say, there where the faithful, at all Masses, still receive the Living God at that holy extension of the altar? It seems so.”

“The Cathedral of Vienna is now a multipurpose hall, a place where it does not rain and which is badly heated, but at least it offers ‘ambience.’”

If we do not have any other idea of how to promote a good cause, he continues, “then the performance of Jedermann at St. Stephen's Cathedral is not only the story of the death of a wealthy man, but also of the death of a feeble Church.”

Some Catholics might also object to the fact that Cardinal Schönborn gave permission for Philipp Hochmair – who has performed naked on stage, starred in homosexual love scenes in movies, and has a strong liking for playing diabolical figures on stage – to perform in the cathedral.

Many Catholics might likewise ask whether such a performance is not really, and in several respects, a slap in the face to God – as was the previous event at St. Stephen's Cathedral last year, at which  Conchita Wurst, a famous drag queen, gave a speech.

The homosexual activist and co-sponsor of the November 30 event and last year’s featuring the drag queen claimed in September that Cardinal Schönborn blessed him and his homosexual partner at a private dinner. After the blessing, said Keszler, “his confidant had brought a bottle of champagne, and he loosened the cork, and after this blessing, this cork bursts into the air, comes thundering down, and breaks his plate – my most expensive Meissen plate!”

“This was no little bit of a forced outing for the cardinal,” Keszler says, “but since he has done it, he probably will also be fine with me saying it.”

Later, Cardinal Schönborn said he merely blessed Keszler and his partner as the hosts of that evening, thus denying having performed a special blessing of the homosexual couple.

Of the rock concerts, flickering lights, and half-naked dancing actors on the Communion rail, Father Schwarz says: “I am ashamed of my Church in this and in other questions. We do not fear the Almighty anymore! Nothing is anymore holy for us! We trample upon the souls that are entrusted to us!”