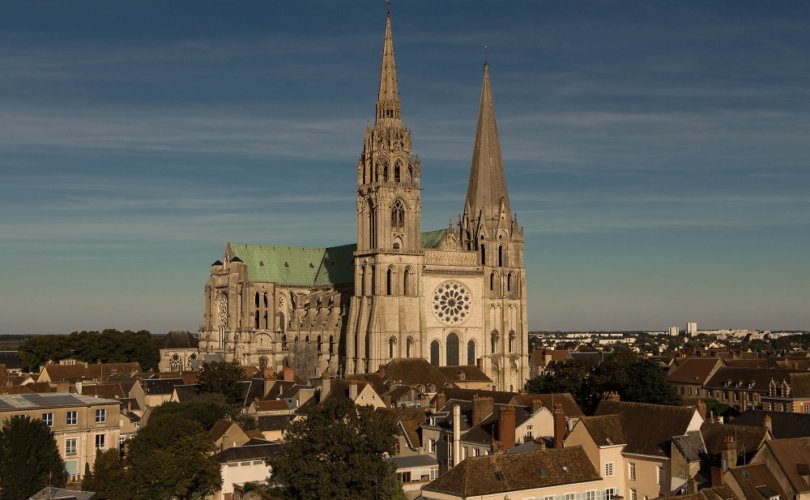 May 27, 2020 (LifeSiteNews) — I have been four times on the Chartres Pilgrimage. It’s not a competitive sport, but I should add that only on two of these occasions did I manage to complete it — that is, to walk the entire distance from Notre Dame in Paris to the mighty Chartres Cathedral, more than 60 miles, in two and a half days.

It takes place over the weekend of Pentecost Sunday — Whitsun — with sometimes more than ten thousand pilgrims. Last year, for the first time for many years, it was not able to use Notre Dame because of the terrible fire there in April 2019. In 2020, it will be taking place only “virtually,” due to the coronavirus epidemic.

The participants are mostly young people, and many pilgrims come every year. Its cancelation is a great blow to them and to those hoping to experience it for the first time. Serious pilgrims are used to setbacks, however, and they will be back.

Walking pilgrimages have made a remarkable comeback after almost disappearing in the 1970s. The numbers doing the “Camino,” the pilgrimage on foot (or bicycle) from various directions to Santiago de Compostela in northern Spain, have increased in the most extraordinary way, from hundreds to hundreds of thousands, since that low ebb. Many of the pilgrims are the “spiritual but not religious” types, but the fact that this traditional devotion attracts them so powerfully itself speaks of the evangelizing potential such events have. The typical Camino route takes six weeks to complete: some people do it a section at a time, returning to carry on where they left off year after year.

The Chartres Pilgrimage is considerably shorter, but unlike the Camino, it is done collectively, with huge campsites at night, and huge celebrations of Mass, some outside, for the whole group each day. And it is walked at a cracking pace, starting very early in the morning and ending as late as seven in the evening, to squeeze it into a long weekend. When exactly you leave or arrive depends on the place of your little group (“chapter”) in the column. The whole column takes well over an hour to pass a fixed point.

Not so many “spiritual but not religious” people take the Chartres Pilgrimage, which is an intense collective Catholic experience. The pilgrims sing, pray, and listen to meditations and sermons along the route. The Pilgrimage has a strong French flavor, naturally, but there are chapters from Germany, England, Scotland and Ireland, Spain, America, and elsewhere, singing and praying in their own languages as well as in French.

The Chartres Pilgrimage teaches us many lessons. It demonstrates the Catholicity — the universality — of the Church. We come together from all over Europe and beyond to honor the Blessed Virgin Mary in her French shrine, paying respect to French piety without losing our own identity. It also demonstrates the possibility of a mass youth event THAT does not descend into licentiousness or liturgical abuses, accusations regularly made about World Youth Day events. The Chartres Pilgrimage is based on a disciplined traditional spirituality, with the traditional Latin Mass.

It also demonstrates the fruits of doing something difficult. The Church should not be making salvation difficult, but the Chartres Pilgrimage shows how people can respond to a challenge. The physical challenge of the walk is considerable, and the creature comforts, and indeed the food, along the way are extremely limited. It is tough enough that even fit young people can view their completion of it with satisfaction, and the rest of us need to prepare for it pretty rigorously.

To be blunt, the Chartres Pilgrimage is a penance. The idea of voluntary penance fell out of favor in the 1970s, but the pilgrimage is a good demonstration of why it makes sense. Penance is not about being deliberately miserable, but taking on with joy some extra burden, which justifies an honest celebration when it is past: at the end of Lent, say, or after that Mass in Chartres. The feeling of being united in this kind of effort with others, and of a physical effort being connected with a spiritual effort and a spiritual goal, is something no young Catholic should miss out on. Indeed, there are similar, though much smaller, walking pilgrimages now in many other countries: I hope our one in England, a mere 50-mile walk from Ely to Walsingham, at the end of August, will escape cancellation this year.

Perhaps it wasn’t such a good idea for the Church to ask less and less of the faithful: fewer Holy Days of Obligation, ever fewer days of fasting and abstinence, a Eucharistic fast so short as to be almost meaningless. Dispensations for the infirm can always be made, but for the rest of us, being asked to make a serious effort demonstrates the seriousness of the whole enterprise. You can’t get to Heaven by floating downstream.