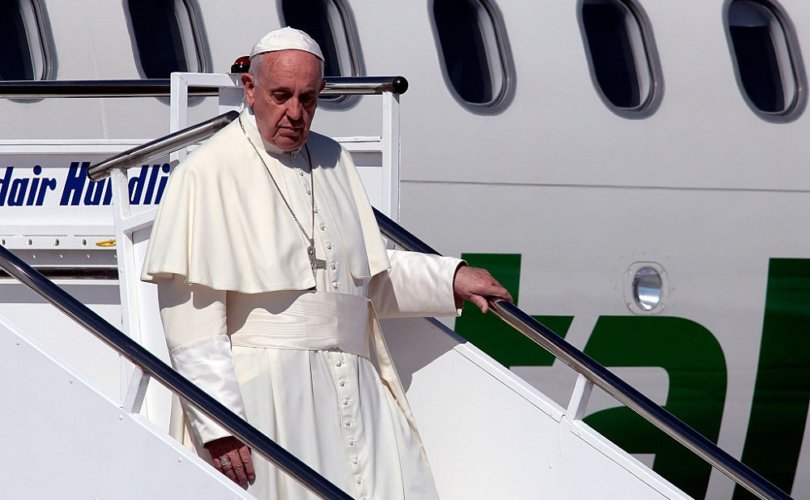 October 23, 2020 (LifeSiteNews) – In the aftermath of Pope Francis’s pronouncement in a just-premiered documentary seemingly supporting the legalization of gay civil unions, chaste same-sex attracted Catholics are struggling to find the right words to express the sense of betrayal and outrage they’re now experiencing.

While conservative prelates and Catholic scholars have been quoted extensively in religious and secular media around the globe over the last 48 hours explaining the problematic nature of the pontiff’s troubling assertion, those who heroically reject homosexuality and choose day in and day out to live chaste lives are now offering poignant commentary on the harm inflicted by Pope Francis’s infelicitous remarks.

“Most of us are just depressed and humiliated by him,” said Jeremy Schwab, speaking on behalf of many chaste same-sex attracted (SSA) Catholics

It is possible for him as an individual to be heretic and to take those stances, but he can’t change Church teaching. It is still emotionally traumatizing to all of us.

Before I became Catholic, I had studied the history and knew about the scandals of medieval Popes and the worst sinners in Church history. None of that disturbs me the way this Pope does.

“My first thought upon reading Pope Francis’s words was, ‘Oh, no!’” Paul Darrow told LifeSiteNews. Darrow is one of three chaste SSA Catholics featured in the movie Desire of the Everlasting Hills, produced by the Courage Apostolate.

Yes, he was merely expressing his personal opinion. But the Pope’s opinion was like a shot felt around the world, and that shot went straight to my heart.

As a Catholic with SSA, I was called to see the bigger picture and to turn away from my sex-addicted life. In that picture I recognized the real purpose of sexual intimacy and discovered that my body truly is the temple of the Holy Spirit.

One of the saddest things a chaste, faith-filled Catholic like me could hear is that the successor to the Chair of Peter has just endorsed civil unions — the first stage of the rockets that brought gay “marriage” into being.

“This story may be the straw that breaks the camel’s back that is my Catholic faith,” Thomas Berryman told LifeSiteNews. “I do not think Pope Francis knows how much pain he’s causing because he doesn’t care.”

In 2013 and 2014, when I was going through RCIA, I made a conscious effort to ignore all of the signs that I was entering what I would call a “target-rich environment.” Instead, I concentrated on being celibate, believing that is what Holy Mother Church wanted.

Over the past six years, I’ve ignored all kinds of things. For example, I’ve ignored the moribund state of Courage and the robust state of Dignity in our Archdiocese. I ignored Cardinal Tobin’s “nighty night, baby” text and his seemingly odd decision to invite a random guest student at Seton Hall University to live with him (a wannabe actor and model with a penchant for appearing shirtless). I sort of ignored Pope Francis when he invited a transgender man from Spain (Diego Neria Lejarraga) to the Vatican (and paid for all the costs). Then he sent money to trans sex workers who were having financial difficulties.

Pope Francis doesn’t merely preside over a church with a homosexual sub-culture and problems with its priests being unable to keep their hands off boys. He is the gay leader of a gay church dominated by a homosexual super-culture. I read somewhere that, privately, at least, James Martin mocks men with same-sex attraction who are celibate. Is that the attitude of many (or even most) priests? I suspect that it is Pope Francis’s attitude.

“Where does this leave me? Who can I trust?” asked Berryman. “Celibate priests and bishops in Detroit [Berryman’s diocese] are an endangered species.”

“How do I go to anyone for counseling who probably thinks I’m a fool and holds me in contempt?  How do I seek absolution from someone who thinks the sins I’m confessing are funny and thinks I’m a fool for believing them to be sins?” he wondered.

“What is particularly galling is that most of us who have lived [as homosexuals] learned not to trust people.  In other words, most of us already have trust issues,” lamented Berryman, who urged bishops to “get off the fence and take a stand.”

“Under the papacy of Francis, after a series of increasingly specific statements about homosexuality … pro-gay priests and LGBT Catholic ministries are very much in the ascendancy and have become increasingly bold in their actions and public statements,” Joseph Sciambra told LifeSiteNews.

“Myself, and my friends, to a certain degree, always felt rejected by the local parishes and diocese, but now we feel rejected by Rome as well,” he declared.

Andrew Comisky, a same-sex attracted man who is married (i.e., to a woman) and is the founder of Desert Stream Ministries, who became a Catholic a decade ago, urged Pope Francis to repent in an open letter published yesterday:

How can we who die daily to the seduction of a global culture intent on fanning our vulnerabilities into an expanding list of fractured “selves” when you bless and advocate legal “cover” over them? Pope Francis, wake up. These forces are unseen robbers who are intent on destroying lives. We who through God’s mercy have repented of our sins and who now fight for the chaste dignity of our comrades are hindered, not helped, by the dissociation of your beliefs and pastoral application.

A true father fights for the dignity of his children, especially when they become worldly, conformed to other 'selves' and mastered by disordered desires. You have not fought for us. Instead, you have done us sinners a disservice, granting us false assurance in our divided states. I repeat: you have not fought for us. Love is more stern and splendid than mere acceptance.

You have exhibited compromise and confusion in your pastoral care of persons with same-sex desires. Your merciful intentions are not trustworthy to me and to those I represent.

As we have repented, so can you, Pope Francis.