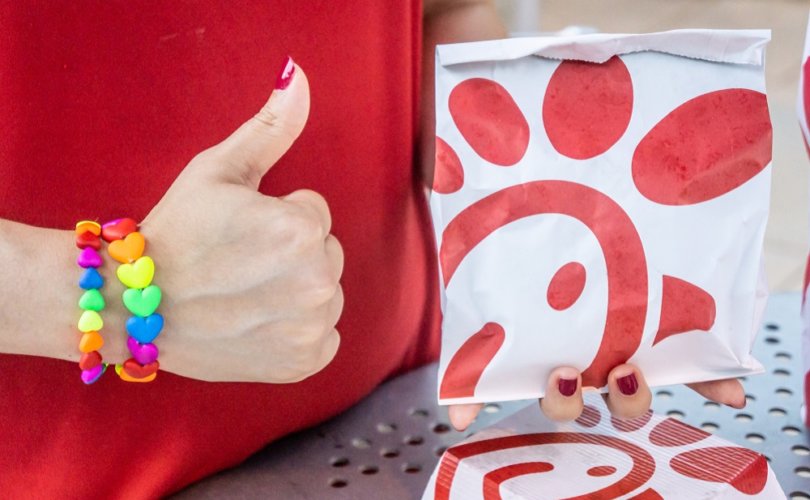 WASHINGTON, D.C., November 22, 2019 (LifeSiteNews) — At Chick-fil-A, the politically correct handwriting was on the wall for a long time, but most of us missed it.  Until now.

Just four days since the popular chicken restaurant’s infamous announcement about reprioritizing its corporate giving, and despite the launch of a counter-narrative by conservatives Rev. Franklin Graham, Erik Erickson, and others, it’s clear that Chick-fil-A (CFA) has been on a troubling leftward trajectory for quite some time.

The revelations are stunning.

CFA fans wouldn’t have been caught by surprise if they had been paying close attention to the organization’s corporate structure, according to Daniel Greenfield, a Shillman Journalism Fellow at the Freedom Center, writing at Frontpage Magazine. Many of the restaurant’s loyal patrons assumed that CFA was different from other large corporations and that it continued to be guided by a biblical vision. They were wrong. The corporation was slowly evolving away from its Christian principles, but CFA wasn’t about to broadcast that.

“The Executive Director of the CFA Foundation is Rodney D. Bullard, a former White House fellow and Assistant US Attorney,” noted Greenfield. “Some may have mistaken him for a conservative because he was a fellow in the Bush Administration, but he was an Obama donor, and, more recently, had donated to Hillary Clinton’s campaign while at Chick-fil-A.”

“Bullard became its Vice President of Corporate Social Responsibility. Unlike charity, corporate social responsibility is a leftist endeavor to transform corporations into the political arms of radical causes,” he said. “Like other formerly conservative corporations, Chick-fil-A had made the fundamental error of adopting the language and the infrastructure of its leftist peers. And that made what happened entirely inevitable.”

“Most of the country’s major brands are pipelines of cash that lead directly to leftist causes,” explained Greenfield. “Hardly any of the money that conservatives spend on products and services every day ends up going to conservative causes.”

Sadly, Chick-fil-A has chosen to make itself part of that pipeline, ending funding to Christian groups that LGBT activists had condemned as “anti-gay” because they adhered to the definition of marriage as between a man and and a woman. Instead, CFA is redirecting its donations to overtly LGBT-promoting organizations such as Covenant House.

In September, as CFA was about to open its first Canadian outlet, the restaurant chain hired Navigator, an international lobbying firm described by Dr. Charles McVety, president of the Institute for Canadian Values, as the “number one gay lobbying firm” in Canada.

McVety said this was a “huge hint” about the company’s future direction.

According to documents filed with the Toronto Office of the Lobbyist Registrar, the firm  — whose company slogan is “When you can’t afford to lose” — was hired to “ensure a smooth launch” in Canada.

Additionally, Chick-fil-A hired Group SJR, a New York–based communications company that, according to the Toronto Star, had begun dealing with the company’s international expansion two years ago.

“They’ll try to thread the needle a while longer,” noted tech guru and commentator Rod D. Martin on Facebook. “But putting a leftist in charge of the Foundation was all we really needed to know.”

“While Dan Cathy may say the company has the same values, the company’s statements and actions tell a different story,” said Mat Staver, founder and chairman of Liberty Counsel, in a rebuke to Rev. Franklin Graham, who insists that nothing has changed at CFA.

“Franklin, you have done a huge disservice by not doing more investigation into Chick-fil-A’s betrayal and capitulation to the LGBT agenda,” said Staver.

“Covenant House also proudly supports the New York City Gay Pride parade with its own float, banners, t-shirts, and hastag #CovUnity. Covenant House is recognized as a national funder of LGBTQ causes,” continued Staver. “And Covenant House does not stop at LGBTQ activism; it also takes girls to abortion clinics.”

“To save its own corporate skin, Chick-fil-A has thrown good, biblical, organizations under the bus and legitimized the false narrative of the LGBT activists,” said the Liberty Counsel founder. “Chick-fil-A voluntarily surrendered to gain entrance into more liberal communities. In doing so, the company has caused incredible damage to the greater Christian community.”

Additionally, over the last few days, those who had previously remained silent about troubling developments at Chick-fil-A have spoken up.

“To a lot of Americans, the company’s decision to walk away from years of biblical truth is upsetting,” wrote Tony Perkins, president of the Family Research Council (FRC) in Washington, D.C. “To us, it’s personal.”

In August 2012, after FRC had very publicly supported “Chick-fil-A Appreciation Day,” a gunman intent on killing as many FRC employees as possible walked into FRC’s offices with a backpack full of Chick-fil-A chicken sandwiches he planned to smash in the faces of those he wanted to murder, because he perceived both FRC and CFA to be “anti-gay.”

“In the days and years after that, we never talked publicly about Chick-fil-A’s response to the shooting. Mainly because there wasn’t one. Through all of the press conferences, the trial, and sentencing, I never once picked up the phone or opened my email to a message from someone at headquarters,” said Perkins.

CFA never reached out to FRC to inquire about the condition of the FRC security guard who was shot by the gunman he had prevented from carrying out his murderous plan.

“That was tough, but we stayed quiet — hoping that if groups like FRC stood beside them, the company Christians had come to love would have the courage to keep living out their values in the public square,” said Perkins.

“Obviously, Chick-fil-A wanted then what they want publicly now: as much distance from our movement as possible,” he added.

Starnes said he had previously kept quiet about the troubling intervention by Chick-fil-A executives but now feels free to tell the story because it further reflects on the company’s “change in values.”

A massive betrayal of Chick-fil-A’s most ardent fans

Though a few have accused LifeSiteNews and certain members of the Catholic blogosphere as having “rushed to judgment” regarding CFA’s move, a closer look at its history reveals that the kick-in-the-gut betrayal felt by so many this week has actually been a slow-motion betrayal rolled out over time.

Over 100,000 concerned individuals who have taken the trouble to sign petitions urging Chick-fil-A to reverse its recent charitable giving decision agree with us.

Chick-fil-A’s recipe for expansion as it tries to spread into Canada and the U.K. is proving not only to be poison for its most loyal customers. Perhaps it is a form of corporate suicide.