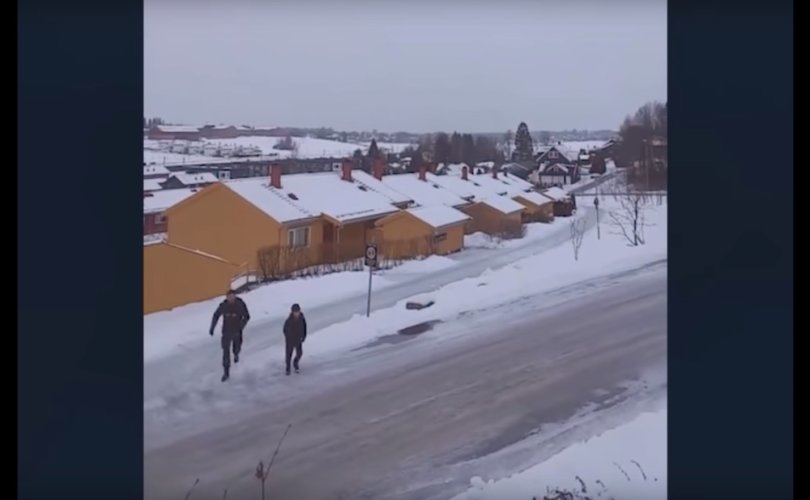 February 19, 2018 (LifeSiteNews) – Terese and Leif Kristiansen are currently living through one of a parent’s worst nightmares: Their 12-year-old son, Kai, was removed from the family home in As, Norway by force earlier this month. Kai attempted to run away from the police and social workers in order to stay with his family, and so the little boy was chased down, tackled in the snow, and dragged away. The boy has only been allowed to speak to his mother once since his state abduction, and his parents do not even know where their son is being kept.

Insanely enough, the Kristiansens are not accused of any abusive behavior towards their son. Rather, the parents had grown increasingly concerned about the bullying their son faced at school and had made the decision to homeschool him. The Kristiansens had informed the school of their decision—homeschooling isn’t illegal in Norway—and had also informed Barnevernet, the “child protection agency” that showed up to take their son away. The reason given for this government kidnapping was rife with painful irony: Apparently, social workers were concerned that if Kai were homeschooled, he would not be appropriately “socialized.” They didn’t comment on the trauma they had inflicted by removing a boy from a loving home by force and against his will.

Watch video of Barnevernet officials chasing down and tackling Kai:

To make the situation even stranger, the Kristiansens were not even told that their son would be taken from them if they did not send him back to school. Barnevernet officials simply showed up with an “emergency order” to take him to a foster home and into the care of the government—for the non-crime of pulling their son out of a government school. It is horrifying to consider what these parents must be going through right now—at the mercy of faceless bureaucrats who are keeping their son from them, in an undisclosed location—parents who have not even been accused of any abuse.

Readers might remember that the Barnevernet has had an ugly reputation for heavy-handedness for some time. Back in 2015, they removed five children from a Romanian-American family, citing concerns about occasional spankings. In that instance, they swooped in suddenly, scooping up children at the bus stop—and then showing up later to seize the baby, as well. The incidents sparked an international outcry, and the family was reunited after nine months—in which authorities had allowed minimal contact between the parents and the children.

Christian concerns about state power and interference with parental rights in education are often mocked, but it is scenarios such as this one that highlight why big government is so dangerous. When the state decides that government bureaucrats are better-qualified to determine what is best for a child than parents are, the results can be horrifying. It doesn’t hurt to point out here that progressives constantly point at the Scandinavian nations as a role model for other Western nations to follow—something that should make any parent nervous.

We’re already starting to see disturbing signs here in North America. Provincial governments are creating new curriculums that indoctrinate students into social justice ideology as well as implementing sex education curriculum that conflicts with the values of many parents—and most political progressives don’t think parents should be permitted to opt out. They believe, fundamentally, that children belong to the state—and some have come right out and said so. Parental rights in education will be one of the defining social battles of our time, because if we lose it—we lose the rights to our own sons and daughters.

Consider what has already befallen two Ohio parents this year, who were forced by government authorities to give up custody of their daughter. And why? Because after she was diagnosed with depression, gender dysphoria, and anxiety, they opposed her being given testosterone and sex change drugs, because they felt that such “treatment” would not be in their daughter’s best interests. Because of this stance, their daughter was removed from their care. Gender ideologies that are barely a decade old can now result in the loss of your children—and these threats will only continue to grow.

It is absolutely essential that we be paying attention to events like this, and that we make our voices heard. It is easy for those who send their children to a private Christian school or homeschool to perhaps think that their families are safe, and that what goes on in the public school system will not impact them. But this is unfortunately not the case. The ideologues will never be satisfied until children of all parents—especially their opponents—are indoctrinated into their ideas.