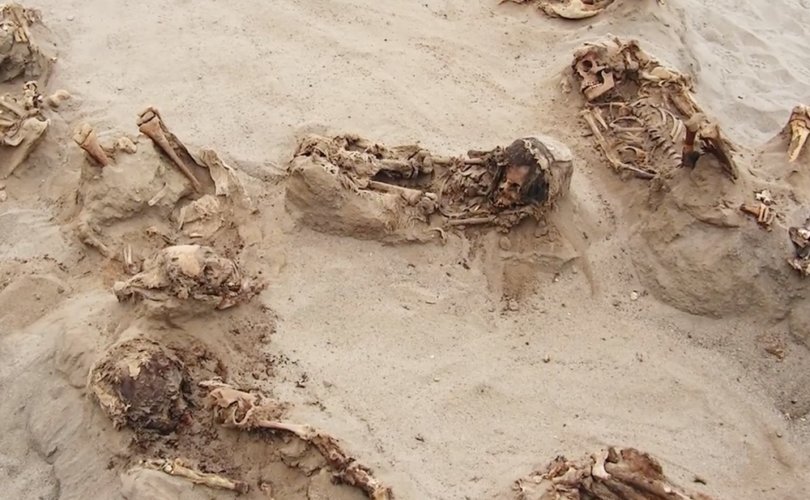 Remains of 140 children between the ages of 5 and 14 who were sacrificed about 550 years ago were found recently by archaeologists.Guardian News / Youtube screen grab

June 12, 2018 (LifeSiteNews.com) – In April of 2018, archaeologists in Peru announced a horrifying discovery: Evidence of what appears to be the largest single mass child sacrifice in the world. Researchers uncovered the skeletons of 140 children between the age of five and fourteen years old, many with dislocated and twisted rib cages, indicating that their killers may have been attempting to pull out their hearts. From what they can tell, archaeology experts believe the children were sacrificed just over five centuries ago to appease the gods as a result of mass flooding.

That same month, an article appeared in the publication Foreign Policy, grappling with an eerily related question: “Should Brazil keep its Amazon tribes from taking the lives of their children?” For centuries, the article noted, a few indigenous tribes in Brazil have committed the ritual murder of infants and some children, specifically those who were considered to be a “bad omen”—disabled children, children born to single mothers, and twins. This question was raised by events unfolding in Brazil. As John Daniel Davidson explained over at The Federalist:

At issue is a law under consideration in Brazil that would outlaw ritual infanticide and child killings by native groups, known as “Muwaji’s Law,” named after an indigenous woman who rejected her tribe’s expectation that she kill her disabled daughter in 2005.

The Brazilian Association of Anthropology staunchly opposes Muwaji’s Law, and compared it to “the most repressive and lethal actions ever perpetrated against the indigenous peoples of the Americas, which were unfailingly justified through appeals to noble causes, humanitarian values and universal principles.” The association also called the law an attempt to put indigenous peoples “in the permanent condition of defendants before a tribunal tasked with determining their degree of savagery.”

That sentiment is shared by Brazil’s National Indian Foundation, known as Funai, which refuses to collect data on child-killing among indigenous tribes, resists even acknowledging its existence in public, and said in a 2016 press release that raising the issue at all “is in many cases an attempt to incriminate and express prejudice against indigenous peoples.”

Those statements, Davidson explains, are actually intended to refer to two key proponents of the law, the founders of an organization to protect the rights of indigenous children called Atini, Marcia and Edson Suziki. The Suzukis, who are also evangelical missionaries, lived among the various indigenous peoples of Brazil for decades, and have witnessed for themselves some of the horrible child-killing practices that still exist among certain tribes. The Suruwaha, for example, believe that children with physical disabilities as well as twins and triplets have no souls, are cursed, and must be killed, usually by being buried alive. As Davidson recounted:

In 1995, the Suzukis were living among the Suruwaha when tribal leaders decided that a two-year-old girl named Hakani, who still could not walk or talk, should be killed, and ordered her parents to do it.

The harrowing story of what ensued was recounted in a 2007 report in The Telegraph:

They committed suicide—eating a poison root—rather than obey the order. Hakani’s 15-year-old brother was then told he had to kill her. He dug a hole to bury her next to the village hut, which is where the tribe usually buries animals, and hit her over the head with a machete to knock her out.

However, she woke up as she was being placed in the hole and the boy found he could not go through with the killing. Hakani’s grandfather then shot her with an arrow. He was so upset he tried to commit suicide, too. But Hakani survived, although her wound became infected and she was left to live like an animal in the forest for three years. At the age of five she was very undersized, still unable to walk and abused by other Indians. She survived only because a brother smuggled food to her.

The Suzukis eventually got Hakani the medical care she needed—she was diagnosed with a treatable condition, hypothyroidism—and nursed her back to health. They tried to bring her back to the tribe, “to show them she was not cursed,” Márcia Suzuki said. “But nobody wanted her.” So the Suzukis adopted Hakani as their own.

Instead of bringing attention to the plight of disabled and unwanted indigenous children, the Hakani affair prompted the public prosecutor’s office in the state of Amazonia to recommend in 2003 that all nonindigenous people be banned from lands occupied by the Suruwaha.

And why was this recommendation made? Because a prominent anthropologist accused the Suzukis of “advocating for Western values” (in this case, condemning the murder of children), and that by doing this they were standing “in the way of the realization of a cultural practice filled with meaning.” In short: The Suzuki’s opposition to the ritual killing of children like their adopted daughter was viewed, by some experts, as an inexcusable form of cultural colonialism. Western publications like Foreign Policy, devoid of any real moral compass, are very sensitive to these sorts of accusations, and are now forced to grapple with whether or not ritual child-killing should be allowed—after all, no one culture is superior to another, and who are we to judge?

There may be some readers who scoff here, believing that surely the folks over at Foreign Policy are an outlier being utilized by an anti-abortion writer with an axe to grind. I wish that were the case. The truth is that I have talked to dozens of moral relativists on university campuses right across North America who also refuse to condemn infanticide for similar reasons—if not because of cultural relativism, then simply the firm belief that each person can create morality for his or herself, and if that involves infanticide, then so be it. And they have some heavy-hitting Western intellectuals in their corner: Dr. Peter Singer of Princeton openly advocates for the legalization of infanticide on the basis of infant children being “non-persons,” and the Journal of Medical Ethics also published a lengthy paper advocating the same thing, posing the chilling question, “After-birth abortion: Why should the baby live?”

The Suzukis not guilty of attempting to spread “Western values,” because those values now include the destruction of children—and often the same children that are being destroyed by indigenous peoples, and for the same reasons. Children with disabilities are aborted in the womb at a staggering rate—one fellow I met canvassing in Dublin prior to Ireland’s abortion referendum last month was voting against abortion because he was worried that people like his two beautiful sons with disabilities would cease to exist. Statistics in other Western nations indicate that he is correct—journalists talk about countries having “eliminated Down Syndrome,” for example, while rarely mentioning that it is children with Down Syndrome who are actually being eliminated. In fact, cultural colonialism now takes a different form entirely: Nigerian pro-life activist Obianuju Ekeocha told me in a recent interview that Western nations are relentless in their attempts to bring abortion to African countries that often resist these unwanted intrusions.

This all reminded me of a book I was reading last week by a German journalist who spent several years interviewing the children of prominent Nazis. One fellow he met, a close colleague of Albert Speer, remained unrepentant in his beliefs, stating that society was coming around to much of what the Nazis preached in the first place. “He wanted someone to explain to him,” journalist Stephan Lebert recounted uncomfortably, “the difference ‘between our [Nazi] euthanasia policy’ and the current practice of allowing the termination of pregnancy on the basis of testing positive for certain handicaps. ‘I don’t see any great difference between the two,’” the old Nazi noted. Lebert ignored the pointed question, and instead writes that he listened to smooth jazz music to “distance himself” from such questions.

There is little difference between the Western practice of culling the disabled and the imperfect in the womb, the Nazi practice of euthanizing those same people outside the womb, and infanticide of the disabled by a few indigenous tribes. At the end of the day, each society decided to remove human rights from a group of human persons for arbitrary reasons, and to deny them their right not to be killed. There are differences in practice and implementation, but those differences mean little to the victims, and only serve to soothe the consciences of the perpetrators.

Those who sacrificed their children to the gods centuries ago in Peru may have had a more advanced view than we do—after all, one archaeologist stated that the children were sacrificed because the Peruvians recognized that children were the most precious gift they had. Here in the West, we have aborted our children in their tens of millions because many think they are worth nothing at all.