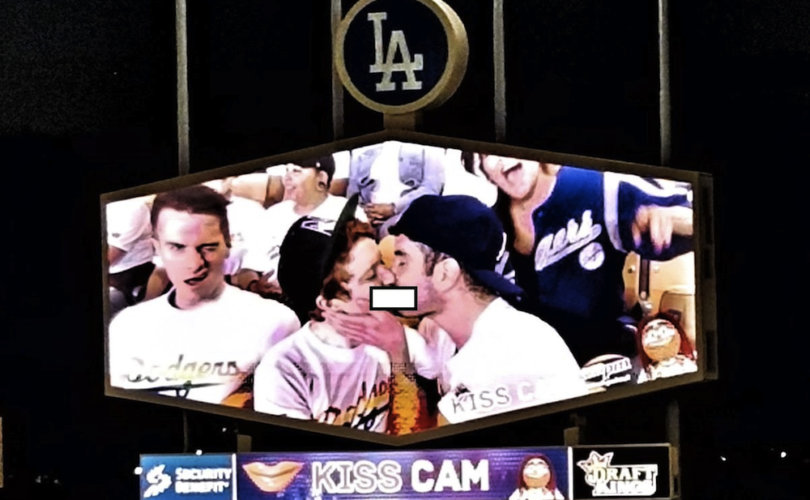 June 16, 2017 (LifeSiteNews) — As America and the West rapidly de-Christianize, the physical, spiritual, and moral threats to our children rise, seemingly in inverse proportion to the expanding godless chaos. The LGBTQ movement, essentially a powerful, well-marketed sin movement, is right up there with radical feminists in tearing down centuries-old norms and our children’s innocence in the process.

Friday, June 9 was LGBT “Pride Night” at Dodger Stadium, and that means it was not a good night for parents to bring their sons and daughters to the ballgame. That is, unless you don’t mind your kids being morally corrupted (as many “progressive” parents apparently don’t; see here, here and here). Or if you’re OK with being forced to give Johnny a lesson on what’s wrong with homosexuality when you’d rather be discussing baseball stats and chowing down on overpriced hotdogs.

Anyway, since it was Sin Night, er, “Gay” Pride Night, the usually innocuous entertainment gimmick known as the “Kiss Cam” was put to illicit ends, showing a bunch of same-sex “couples” kissing. The “Kiss Cam” is a popular feature at a lot of stadiums and indoor arenas in which the big-screen camera pans the audience and then hones in on a couple, who, seeing their faces up on the mega-screen, smooches as the crowd applauds.

It’s fun to watch, although it can get a bit uncomfortable if the camera lands on a couple that’s into excessive PDA (public display of affection). Reactions vary as the highlighted couple is suddenly put on the spot: one pair will barely touch lips while less modest lovebirds will ham it up with a passionate kiss for the crowd.

But when it comes to homosexual kisses caught on the Kiss Cam, appropriate revulsion is taken to a whole new level. I think most parents are like me in yearning for the good old days when all you had to worry about at a ballgame was the drunken jerk behind you cursing like a sailor (or should I say, like a writer for the lefty site Wonkette).

Fact is, heterosexuality is still the natural, God-ordained norm — despite decades of leftist, pro-homosexual and now pro-“transgender” social engineering by the media, Hollywood, academia, and corporations. Comparing perverse, same-sex kisses to the normal variety in the name of “equality” is about as preposterous as … I don’t know, saying two guys or two women can get “married” to each other. Worse than that, like legalizing counterfeit, same-sex “marriages,” it sends a really bad and dangerous, God-defying message to children.

So I was saddened to see the story in the “LGBTQ Nation” site showing one homosexual couple after another at the Dodgers’ game on the Kiss Cam. “The Dodgers are one of 11 Major League Baseball teams featuring a night to honor the LGBTQ community. Attendees received a rainbow Dodgers tee-shirt,” gushes the sodomitic site.

LifeSiteNews just reported on another upcoming Major League franchise celebrating sexual perversion: the Pittsburgh Pirates’ LGBT “pride” day on Sunday, July 2, at PNC Park. Tragically, that event is scheduled the same day as a “Kids’ Day,” in which fans under 14 will get to run the bases and get a free Pirates “replica” jersey. A pro-family advocate, Richard Jarzynka, complained, “The Pirates are specifically marketing to draw children to the game at which they will be celebrating and promoting homosexuality.”

Can you see what’s happening here? The Left is replacing Christianity with pagan concepts of “sexuality” that redefine the created norm. What was once widely regarded in the West as a “crime against nature” (Noah Webster’s definition of sodomy) is now celebrated as just another form of “love.” It began with that slippery term “sexual orientation,” but now that we’re in full LGBTQ “equality” mode, we will see more and more outward expressions of homosexuality, breaking down our natural, God-given inhibitions against this sin.

And if you dare disagree with the notion that all forms of “love” (or each of the dozens of gender-bending “identities”) is “equal,” you will be damned as a judgmental bigot spreading your hate, and your “phobia,” and your narrow, loveless religion.

But God’s eternal Truth remains. The Bible teaches, “There is a way that seems right to a man, but its end is the way to death (Proverbs 14:12), and, “The heart is deceitful above all things, and desperately sick; who can understand it?” (Jeremiah 17:9); the King James Version replaces “sick” with “wicked”).

Homosexual acts are called an abomination (which means “detestable”) in the Bible. They are so seriously wrong that, as top Bible-and-homosexuality scholar Prof. Robert Gagnon notes, God lists homosexuality alongside adultery, incest and bestiality in the Old Testament (Leviticus 20). The Catholic catechism describes homosexual behavior as never justified and “intrinsically disordered.”

I know that’s not the common view among most young people, or even most adults, today, but that’s the way God sees it. Wayward souls can choose to reject biblical revelation, and natural law, and many do, but truth and morality are not determined by polls. They are transcendent and timeless. You don’t get to redefine sin and God’s righteous law based on feelings, even if you’re young and living in a profane, secular culture. It’s beyond your pay grade.

So if you cringe at homosexual PDAs, at the ballpark or at the mall, that just means you’re normal. Cherishing God’s wonderful heterosexual design uniting man and woman in holy matrimony to produce children and continue life on earth — that’s awesome. And opposing sexual deviance — and not wanting it modeled as socially acceptable to your children — that’s also normal and good.

Think about this the next time someone throws the simplistic, LGBTQ egalitarian “Love is Love” formula your way: as parents, we want our children to be exposed to affectionate, happily married, male-female couples, because that’s what we want them to aspire to. This is why our own marital relationships are so key: they model godly unions to our kids (or not).

But we emphatically do not want homosexual unions modeled to our kids as OK, whether it’s two dudes locking lips in the seat in front of your family at a baseball game, or a lesbian teacher with a photo of her and her female lover placed prominently on her desk in the classroom.

And domesticity does not make it right: even a sexually monogamous, 25-year homosexual relationship (far from the norm in the LGBTQ world) is immoral. Furthermore, as Gagnon points out, long-term same-sex relationships are not a new phenomenon but existed in Bible times. Wrong then, wrong today.

This does not mean we are called or allowed as Christians to hate the person engaged in these immoral acts, or revel in our condemnations of public sinners. (The example of Jesus telling the woman caught in adultery to “Go and sin no more,” while saving her from those who would stone her, is illustrative.) To the contrary, we love people enough to tell them the Truth of God’s amazing plan, and reach out to them, as forgiven sinners ourselves, with the life-changing Gospel. Leaving political correctness aside, we urge them to carry on chastely and to trust Christ Jesus to come alongside them in their sacrificial pursuit of righteousness.

And we should point them to those “overcomers” who have chosen not to succumb to the sinful pull of homosexuality in their lives: brave people like LifeSiteNews’ own Doug Mainwaring, Daniel Mattson, Stephen Black, Dean Bailey, ex-“transgender” Walt Heyer, Janet Boynes, and Anne Paulk.

This is another reason why legalized “gay marriage” and all efforts to institutionalize acceptance of homosexuality and gender rebellion are so dangerous. Remember the LGBT Lobby’s rhetorical question: “How does my gay marriage affect your marriage?” Well, here’s one pernicious side effect: by normalizing sexual perversion and calling it “equal” to what is natural and normal — and then going further by honoring it using misleading euphemisms like “marriage equality” — you ultimately end up driving everyone, everywhere, to pretend that it is equal.

It’s not. Far from it. And yet if LGBT advocates have their way — including straight liberals who are often more zealous than “gays” — every child in America, indeed, the world, would be taught that homosexuality is fine, and that anyone who says otherwise, including religious authorities, is a “bigot” guilty of spreading irrational “hate.”

In fact, the drive of proud “gays” to rationalize their aberrant lifestyles impels the LGBTQ Lobby’s fanatical campaign to demonize and discredit faithful Christians, who pretty much are the only ones left in America willing to say “no” to their sin.

In a dying civilization that is losing its once commonly shared religious moorings, things that were once universally held up as good — like the Boy Scouts and Girl Scouts and children’s literature — end up getting corrupted to serve evil causes, as fewer and fewer people defend biblical morality.

Sin — rebellion against our Creator — metastasizes and righteousness goes in retreat. The “gay marriage” movement, followed now by the apostate “gay Christian” movement, is only accelerating America’s descent into spiritual and sexual anarchy, as good becomes “evil” and evil “good.” (Isaiah 5:20).

Long gone are the days when homosexual activists would assure us that their agenda is only about adults, not children. We’re approaching the 30th anniversary of “Heather Has Two Mommies” (first published in 1989)! Now LGBTQ militants demand that homosexuality and gender confusion be sanctioned in schools and that children be allowed — heck, encouraged — to embrace homosexuality and whatever aberrant “gender identity” strikes their fancy.

At the same time, the neo-totalitarian Left works to criminalize parental efforts to guide sexually-confused children out of homosexuality or gender confusion and return to a godly lifestyle — all part of the LGBT Lobby’s “War on Normal.”

We must not just shrug our shoulders in defeat at such assaults on our children, nor shrink away in despair. Ceding baseball, football, hockey, etc., to the LGBT Lobby and “progressives” is hardly the answer.

Instead, we need to aggressively expose the Left’s anti-child agenda, and again make the old-fashioned, Christian moral case for preserving our kids’ innocence. We must redouble our efforts to guide our children into truth, and protect their souls and minds though wholesome entertainment — while girding their minds against the modern lies of various sin advocates, such as the being “gay” or “trans” is “who you are.” And we must hold big corporations and once-noble institutions like Major League Baseball teams and the Boy Scouts accountable when they sell out our kids.

Remember, it was the Lord Jesus, “the way, the truth, and the life,” who said, “If anyone causes one of these little ones — those who believe in me — to stumble, it would be better for them to have a large millstone hung around their neck and to be drowned in the depths of the sea.” (Matthew 18:6)