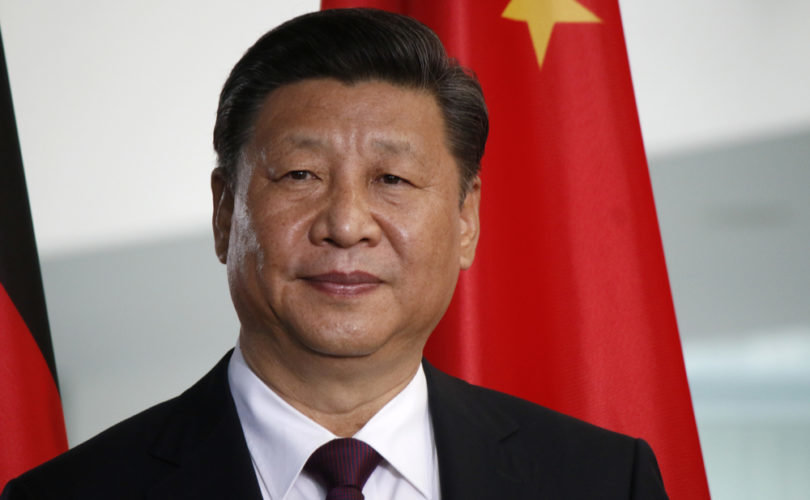 Editor’s Note: This article first ran at LifeSiteNews on July 1, 2021. We are presenting it once again to kick off our series on Beijing’s human rights crimes during the 2022 Winter Olympics, as it is a striking encapsulation of the many abuses Chinese tyrants have foisted upon its populace over the past 100 years.

(LifeSiteNews) — The Chinese Communist Party celebrated its 100th anniversary [on July 1, 2021] with a carefully choreographed display of nationalist fervor not seen since the heyday of the murderous Chairman Mao.

Mao’s successor, General Secretary Xi Jinping, told the massive audience assembled with military precision on Tiananmen Square that “the era of China being slaughtered and bullied is gone forever.”

Unfortunately, the era of the CCP slaughtering and bullying the Chinese people and others seems set to continue — at least for a while. The Party, now 94 million members strong, rules the Chinese people with an iron fist, as it has from its founding on July 1, 1921.

The Party’s murderous history is too voluminous to recount here. I myself have written many books about it, among them Broken Earth (1983), A Mother’s Ordeal (1993), Hegemon (2001), and my latest, Bully of Asia: Why China’s Dream is the New Threat to World Order, without beginning to exhaust the subject.

Millions died during the Chinese civil war, which raged from the 1930s until the Communist victory in 1949. But that was only a prelude to the real killing, when Mao purged his opponents, took total control, and sought to eliminate any and all opposition to his totalitarian rule. Everyone was suspect, from landlords and businessmen, to intellectuals and students, to ethnic minorities and religious believers. One after another was targeted in scores of political campaigns. These continued after Mao’s death.

I estimate that in all, some 80 million or more Chinese, Mongols, Tibetans and Uighurs have died at the hand of the biggest killing machine in human history. As I wrote in A Mother’s Ordeal, the grotesquely misnamed Great Leap Forward (1958-60) alone resulted in an estimated 45 million deaths. If you add to this the 400 million tiny victims of the one-child policy, the total number of victims of Chinese Communism jumps close to a half billion.

The one-child policy was the longest-running political campaign of the CCP — and the most deadly. For 35 long years, Chinese women were hunted down by the Communist authorities if they were thought to have violated the Party-imposed restrictions on childbearing. Those who resisted orders to abort an “illegal” child were arrested, dragged out of their homes to waiting vehicles, and taken by force to the nearest abortion clinic. Mothers close to giving birth were given cesarean section abortions. “Illegal” babies born alive were killed by lethal injection. Doing research in a Chinese town in 1980, I was an eyewitness to such crimes.

Such campaigns to eliminate real and suspected opponents of the regime continue to the present day. They are currently being variously waged against Catholics, Christians, Falungong, Uighurs, Tibetans and others, and each carries with it a butcher’s bill of imprisoned, tortured, and executed innocents.

But these horrifying statistics do not so much illuminate, but rather obscure an important underlying reality: Each one of these victims was a unique, irreplaceable human being who, whether they understood it or not, was made in the image and likeness of God.

The “masses” are told by the Party that such “struggles” are necessary to achieve a Communist utopia. But what such campaigns really enable is a tiny oligarchy of senior officials, led by Xi Jinping, to continue to assert total control over the persons and possessions of their fellow Chinese, accumulating vast wealth and unlimited power in the process.

Up until the past few years, the CCP’s crimes were largely, though not entirely, confined within the border of China. They spilled over into Korea in the early Fifties during the Korean War, of course, and during the 1959 conquest of Tibet. But by and large China was too weak and too technologically backwards to brutalize peoples outside its borders.

That is no longer true. The world is at present under attack from a Chinese bioweapon that was created as part of a military biowarfare program centered in the Chinese city of Wuhan. To date, there have been an estimated four million deaths worldwide from the China Virus. And the number continues to climb.

Add to this the fact that Hong Kong is being crushed, Taiwan is being threatened with invasion, and countries, like Australia, that stand up to Chinese bullying are being economically targeted with tariffs and Party-sanctioned boycotts of their goods. Under the leadership of the increasingly unhinged Xi Jinping — who appears to be on the same trajectory as the paranoid Mao Zedong — the Party now not only continues to be a threat to the Chinese people, but to the world at large.

At present, the CCP’s grip on power appears unbreakable. In control of China since 1949, the Party has already outlasted the 69-year-run of the Soviet Union by three years. But its continued misrule of China is not inevitable.

The Communist economic model practiced by Chairman Mao from 1949 to his death in 1976 was a deadly failure. It was replaced by a brief return to the traditional Chinese imperial practice of closely controlling a market economy. But this is now being replaced in turn by a return to state-ownership, driven by Dictator Xi’s mania for total control. This is a recipe for economic disaster, as every other command economy from the Soviet Union to present-day Cuba has taught us over the past century.

In truth, what is keeping the Chinese economy afloat at present are continued “blood transfusions” from the United States. These “transfusions” come in three forms. First, there is the continued theft of U.S. intellectual property by Chinese spies and hackers, estimated to be in the hundreds of billions of dollars each year. Second, there are the hundreds of billions of dollars from U.S. capital markets that flow to China each year, courtesy of Wall Street. Third, and finally, there is the apparently insatiable desire for cheap, China-made goods on the part of the big box stores and the American consumers.

This means that the U.S. needs to adopt three policies:

If we do those three things, the Chinese economy will sink like a stone, and with it the Chinese Communist Party’s drive for world domination.

Of course, these policies may have to wait for a new Congress, if not a new administration. The current administration, suffice to say, is rather compromised where China is concerned.

This is perhaps not an unreasonable supposition on China’s part, since the Biden family seems to specialize in selling out America. Not to mention that Hunter, the president’s son, is still in business with the Chinese Communist Party.