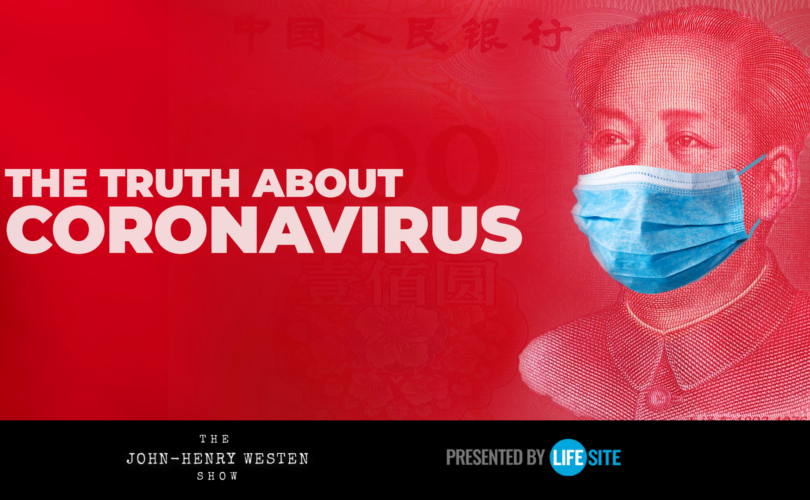 March 12, 2020 (LifeSiteNews) – The coronavirus has been classifed by the World Health Organization as a pandemic. To understand exactly what is going on with it, I invited China expert Steven Mosher on my podcast The John-Henry Westen Show to discuss the latest developments. He reveals to me that communications from China indicate that “the Chinese Communist Party is telling its 94 million party members that the virus really came from the United States.” Here’s a preview of the show.

Mosher is an internationally recognized expert on the Chinese regime, having become the first American social scientist to visit mainland China ever in 1979. The author of multiple books on China, Mosher’s most recent publication is the best-selling Bully of Asia: Why ‘China's Dream’ is the New Threat to World Order. He is also the founder and president of the Population Research Institute, where he fights population control programs across the world.

On today’s special episode of The John-Henry Westen Show, Mosher details the claims being falsely made by the Communist Party which employ clever and convincing argumentation so Communist party members blame the U.S. rather than the Chinese government’s incompetence or worse for the epidemic.

The communists claim the coronavirus “was carried over to China in late October by U.S. military athletes from the U.S. Army Navy and Air Force who are participating in the in the military games which is kind of an Olympics for the world's military they sent over their best athletes which was held – where? – in Wuhan, China from October 17th through the 20th,” said Mosher. Watch the entire show by clicking below.

Florida Republican Senator Marco Rubio wrote a column in the New York Post on March 3 in which he confirms that the Chinese military are in fact making such false allegations. “The Chinese military portal Xilu.com recently published an article baselessly claiming that the virus is ‘a biochemical weapon produced by the US to target China,’” wrote the Senator.