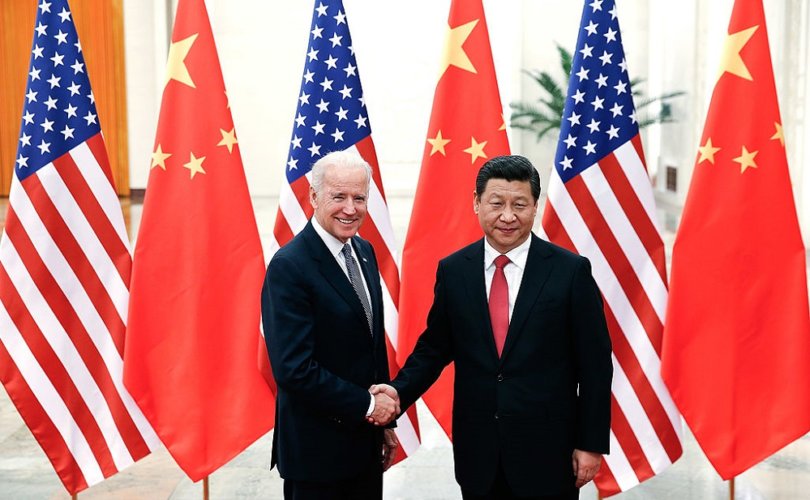 October 19, 2020 (LifeSiteNews) — In the classic movie The Manchurian Candidate, an American prisoner of war is brainwashed by the Chinese Communist Party into becoming an unwitting assassin of an anti-communist presidential candidate.

Leave it to Hollywood to sensationalize everything.

While the Chinese Communist Party is a master at brainwashing, and is certainly not averse to assassinations, it has long followed a simpler script where American politicians are concerned. The preferred ploy is for Party operatives to offer a politico’s immediate family members sweetheart business deals. The expectation is that the paterfamilias will then toe Beijing’s line — or else.

Both 2020 presidential candidates have been offered such barely disguised bribes. One candidate’s son-in-law was offered a half-billion-dollar “investment” into his family’s real estate firm. Jared Kushner — recognizing a bribe for what it was — sent the CCP operative packing. The other candidate’s son accepted a $1.5-billion “investment.” Then Hunter Biden went back to China at least five times for more.

Nobody pays useless money to a drug addict. The intended recipient of this largess was obviously “Pop” Joe Biden.

Now “Pop” says that he knows nothing — zip, zilch, nada — about his son’s business dealings in China and elsewhere. Son Hunter, on the other hand, complains in an email extracted from his defunct laptop that he has to give half of his earnings to “Pop.”

There’s one fact that jumps out from Biden’s record as vice president: wherever Obama puts him in charge of foreign policy as “point man,” whether it be Iraq, Russia, Ukraine, or China, America loses, and the Biden Family wins.

Rudy Giuliani, the former mayor of New York City, doesn’t mince words about what he calls the Biden Crime Family. “What Hunter Biden is is a bagman,” says Giuliani. “I’ve prosecuted many cases like this. He’s collecting Joe’s bribes that come to about $12 million from the Ukraine and $3.5 million from Russia. But the really big money comes from China. And the amount of money involved is literally in the tens of millions of dollars.”

One leaked investigative report summarizes Hunter’s many business deals in China. To take just one example, his private equity deal called BHR, originally worth $1.5 billion, is now worth an estimated $6.5 billion. BHR is probably generating about $130 million a year in fees, of which 10 percent, or $13 million, would go to Hunter. According to Hunter’s email, half of this — or $6.5 million — would have to be turned over to “Pop.”

— Article continues below Petition —
PETITION: No to government and corporate penalties for refusing COVID-19 vaccine
Show Petition Text
103155 have signed the petition.
Let's get to 125000!
Thank you for signing this petition!
Add your signature:
Show Petition Text

But the real big money will come when the Bidens sell their 10-percent stake in BHR, which at current valuations would be worth some $650 million. In actual fact, however, it will be worth whatever the CCP decides to pay the Bidens for it.

What did the Chinese Communist Party receive in return for its investment in the then–vice president?

First of all, they bought the services of a first-rate propagandist. Vice President Biden eagerly spread the the myth not only that China’s rise was inevitable, but that the United States should welcome it. In fact, he has spent most of the past quarter-century attempting to sell Americans on the idea that “a rising China is an incredibly positive development for not only China, but for the U.S. and the rest of the world.”

At the same time, Biden took a dive on the human rights front, soft-pedaling the CCP’s many abuses. When he did speak out in public, it was often to apologize for the CCP’s misbehavior, as when he said on a visit to China that he “understood” the need for the brutal one-child policy.

Biden delivered again as the “point man” on the “Pivot to Asia,” which was intended to reassure our allies in the region that the U.S. was there to stay. Yet as China militarized the South China Sea and tried to bully smaller neighbors such as the Philippines and Vietnam into accepting its claims, Biden was missing in action. By the time he left office, the CCP had fortified its artificial islands, and the U.S. was widely regarded as in retreat.

Another payback to the CCP came in May 2013, when the then-V.P. helped engineer a “memorandum of understanding” with the PRC that exempted Chinese corporations from U.S. securities statutes and regulations. This gave CCP-controlled firms an advantage over American firms listed in U.S. stock exchanges by exempting them from independent audits. This meant that the Party could raise trillions from our debt and equity markets on preferential terms. To put it bluntly, it allowed CCP corporations to cheat unsuspecting U.S. investors out of their money by cooking their books.

Since leaving office, even as the danger that China poses to the United States and the world has become ever more apparent, the former vice president has continued his apology tour on behalf of the PRC. Right now, as China steals our jobs and our technology and sickens the world with the coronavirus, Joe Biden still won’t stand up to it. He has dismissed China’s threat to American national security and jobs, claiming as recently as 2019 that China is not bad and not competition.

Instead, he seems bent upon surrendering to China. He intends to lift President Trump’s tariffs on China without getting anything in return. He will tax American companies at a higher rate than Communist China does, which will lead to millions of American jobs shipped to Beijing. He has even promised to restore funding to the World Health Organization — the same WHO that collaborated with the CCP in covering up the spread of the coronavirus.

Even if Joe Biden comes to understand the mortal threat that the CCP poses to America, he’s in too deep to extricate himself and his family. The CCP could easily leak the details of the deals it has struck with the Biden Crime Family if he tries to get tough on China. Worse yet, it could leak the sex and drug tapes that it reportedly has of Hunter Biden in China doing what Hunter Biden does.

Biden is the real Manchurian candidate. His assignment is not to assassinate his anti-communist opponent, but to defeat him in the upcoming election.