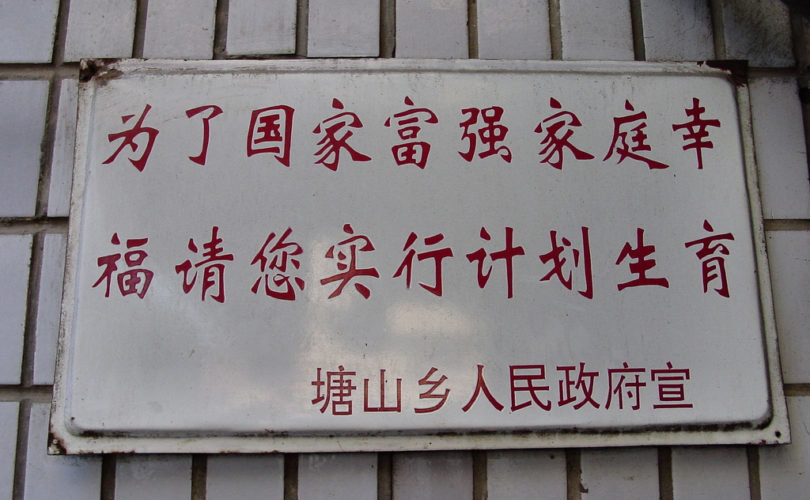 "Please for the sake of your country, use birth control."Wikimedia Commons

July 12, 2021 (LifeSiteNews) – I was doing research in a Chinese commune in 1980, when the handful of old men who run China suddenly instituted a one-child policy. I became an eyewitness to the most horrific population control program the world has ever seen. Pregnant women were arrested and incarcerated for the crime of being pregnant, subjected to endless propaganda lectures about how – for the good of the country – they would have to abort their children, and finally – whether they agreed or not – they were forcibly aborted and sterilized.

The one-child policy, mutatis mutandis, continued for decades. It led to hundreds of millions of forced abortions and sterilizations, and also caused a massive wave of female infanticide. In the beginning, desperate for sons, families kept buckets of water next to birthing beds so that if a girl was born she could be drowned immediately. Later, the advent of ultrasounds led to the selective abortion of unborn baby girls by the millions. I estimate that some 60 million baby girls, born and unborn, were killed this way.

Needless to say, the policy crushed the birth rate in the world’s most populous country. By 2015, China’s National Bureau of Statistics was reporting that Chinese women were averaging only 1.05 children. This was the second lowest fertility rate in the world – tiny Singapore holds that distinction – and a recipe for demographic and economic suicide.

China began haltingly encouraging more births in 2016, when it moved to a two-child policy, but the years since have seen the number of births continue to fall. Only 12 million babies were born in 2020, down from 14.65 million the year before. This is the lowest number of births since China’s great famine of 1961 when, coincidentally, some 42.5 million people starved to death.

A few weeks ago, the handful of old men who run China decided to allow Chinese couples to have three children. The surprise move, made by communist dictator Xi Jinping and his Politburo colleagues, marks a stunning reversal of the infamous one-child policy. The new three-child policy was necessary, China state media Xinhua brusquely explained, “to actively respond to the aging of the population.” No explanation was given as to how this aging had come about. Being the Vanguard of the Proletariat – as Communist parties style themselves – means never having to say you’re sorry.

Of course, saying that the Chinese population is aging understates the problem caused by 40 years of population control. China today is not just aging, it is literally dying, filling more coffins than cradles each year. Chinese Communist leaders are increasingly worried about having enough workers and soldiers for the factories and armies of the future.

At the same time, it is doubtful that the three-child policy will succeed – at least as long as it remains voluntary. The problem is that the ranks of young women were decimated during the decades of the one-child policy. Baby girls were aborted, killed at birth, and abandoned to die by the tens of millions by Chinese parents who were desperate for a son. There are simply too few young women of childbearing age remaining to offset the coming population crash – unless every single one marries and has three children. I can’t imagine any combination of carrots that would induce China’s young, urban, working women to devote themselves to motherhood in this way.

In fact, some young women in China responded to the new pro-natal proposal with mockery — or at least the closest thing to mockery that the communist censors will allow to be posted on social media. “Don’t make me laugh,” one commenter posted on Weibo about the new policy. “Married only children have four elderly parents to care for. If you add three children as well you won’t have a life.”

Of course, if persuasion doesn’t work, I can easily imagine that China’s leaders might resort to compulsion. In fact, local party officials are already suggesting that people need to be strong-armed into the baby-making business. As professor Nie Shengzhe wrote in 2018, “Only the strong leadership of the Party can solve this problem . . . of a catastrophic population decline.”His proposals included only promoting those who have more children, punishing those who use contraceptives, and banning hospitals from performing abortions.

Would Xi Jinping balk at imposing such measures on the larger Chinese population? Not if he remembers the sayings of Chairman Mao Zedong in this regard. The late chairman — who is Xi’s model in all things — said in a famous 1957 speech that, “Reproduction needs to be planned. In my view, humankind is completely incapable of managing itself. It has plans for production in factories, for producing cloth, tables and chairs, and steel, but there is no plan for producing humans.”

By announcing a three-child policy, Xi Jinping has made it clear that he wants to “produce more humans.” No one who has witnessed the brutal coercion of the one-child policy over the years – as I have – should doubt that he has the means to enforce his plan. I predict that, with a few years, we will be seeing what can only be described as “forced pregnancy” in China by a Communist Party desperate to raise the birth rate.

But whatever policy the Party now adopts, it will be too little and too late. The children who were aborted 20, 30, and 40 years ago are the missing workers of today. Already by 2016, China was experiencing a labor shortage of 4 million workers. And the shortfall will only get worse in the years to come. The country will lose over 100 million workers in the next decades as elderly workers retire. And there will be no one to take their place.

The rise of the Chinese economy from 1995 to 2010 relied on a seemingly endless supply of workers emigrating from country to city to engage in low-skill, assembly-line manufacturing jobs. That raised into the ranks of middle-income countries, with a per capita income of around $12,000. But now the supply of workers is running out, and those same assembly-line jobs are moving to India, Vietnam, and Mexico. Add this to China’s inability to innovate because of rampant corruption and intellectual property theft, and China appears caught in what is called by economists the “middle-income trap.”

The path from middle-income to high-income, considered to be around $20,000 per capita, is much harder to climb.  You have to move from manufacturing low-value-added goods to producing high-value-added goods. This requires an innovation economy that is able to create and deploy sophisticated hi-tech manufacturing processes.

China might have escaped this “middle-income trap” through sheer weight of numbers, but the tens of millions of low-wage producers (and consumers) that this would have required were killed by the “geniuses” who run the Chinese Communist Party.

Xi Jinping can announce a “three-child policy” if he wants to. He can coerce every young Chinese woman into complying, whether they want to or not. But it will take a generation before the children of the “three-child policy” reach working age, far too late to make any difference in the demographic and economic crisis that now has China in its grip.

China’s demographic time bomb, which has been ticking for some 40 years, has now gone off. The resulting implosion will take the Chinese Communist Party’s dream of world domination down with it, if not the Communist Party itself.

We can only hope.