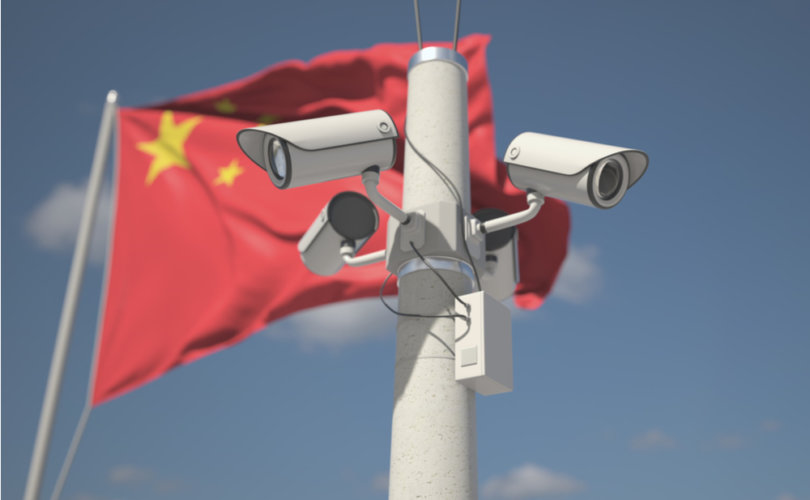 (LifeSiteNews) — Just out of range of the TV cameras beaming the feel-good Beijing 2022 Winter Olympic Games to the planet lies the world’s most suffocating totalitarian surveillance state, engineered and enforced by the Chinese Communist Party (CCP).

“The CCP uses invasive state surveillance and police powers to track citizens and foreigners throughout the country and ensures that no one can hide from the repression of the party,” notes the U.S. Senate Republican Policy Committee (RPC) in a report released last week, titled “China, Human Rights, and the Olympics.”

“China’s authoritarian regime ruthlessly deploys the very latest in surveillance and artificial intelligence technology to monitor and control its 1.4 billion citizens,” observed The Washington Examiner’s Amby Conn Carroll. “This is unsurprising since any totalitarian communist state must exert maximum control over its people in order to survive.”

“Maximum control” has clearly reached new heights thanks to advances in technology and the near-universal use of social media over the last decade.

“What we have now in China is the nightmare of the world’s first truly totalitarian state,” said Steve Mosher, president of the Population Research Institute and a China expert, in 2019.

“The Left has always said that true totalitarianism is impossible to achieve because there are never enough minders,” Mosher told LifeSiteNews. “That’s no longer true.”

Reporters Without Borders ranked China 177 out of 180 in its 2021 World Press Freedom Index, barely edging out neighboring North Korea.

Big brother is big in China

“The [CCP] is able to continue these abuses through an advanced surveillance network, strict control over information, politically motivated arrests, unlawful killings, torture, and state-sanctioned ‘disappearances,’” according to the RPC. “China’s vast surveillance networks can track people throughout the country and applies a ‘social credit score’ based on data collected by the state to judge citizen’s loyalty and restrict their freedoms accordingly.”

“China’s social credit system incorporates a moral edge into the program, which is why many have compared it to some level of dystopian governance, such as in George Orwell’s ‘1984’ in which the state heavily controls every aspect of a citizen’s life,” wrote Business Insider’s Katie Canales in December.

Westerners are uncertain just how many surveillance cameras are now keeping watch on Chinese citizens, but human rights and technology observers agree that the CCP state has the world’s largest surveillance network.

“While the expanding Orwellian eye may improve ‘public safety,’ it poses a chilling new threat to civil liberties in a country that already has one of the most oppressive and controlling governments in the world,” suggested Anna Mitchell and Larry Diamond in a 2018 The Atlantic commentary. “The installation of an all-seeing-eye for the government alarms civil liberties and privacy advocates worldwide.”

“China is rapidly adopting CCTV (closed circuit television) surveillance as a means to monitor the movements of its population at a huge scale,” Paul Bischoff, a researcher on surveillance topics, told The Daily Mail.

“CCTV in China is not just about stopping crime, but also enforcing social norms and behaviors that the government approves of,” he added.

The extent of China’s efforts currently in place to monitor ordinary citizens and control their activities is mind-blowing, pushing its reach into the most intimate aspects of their lives.

In some public restrooms, users must first undergo a facial recognition scan before being allotted toilet paper.

And if a pedestrian jaywalks, facial recognition systems immediately charge the offender a fine and subtract points from their social credit score. Additionally, their images and names will get projected onto large LED screens as a means of inflicting public shame.

When China released the Wuhan Virus — COVID-19 — upon the entire world, the CCP seized the opportunity to increase video surveillance of its own citizens who had tested positive for the virus. Those diagnosed with COVID-19 found video cameras installed outside the doors to their homes, a measure meant to ensure that they remained in quarantine.

“I can’t bear the thought that our everyday lives are completely exposed to the government’s scrutiny,” a man who had been subjected to 24/7 remote observation by the CCP government told CNN. When the period of his confinement was over, “he took out a hammer and smashed the device in front of the community workers.”

China’s surveillance state should scare everyone

The Atlantic’s Anna Mitchell and Larry Diamond offered a prescient look toward the future when they wrote in 2018 that “China’s Surveillance State Should Scare Everyone.”

“The country is perfecting a vast network of digital espionage as a means of social control — with implications for democracies worldwide.” The duo continued:

China’s experiments with digital surveillance pose a grave new threat to freedom of expression on the internet and other human rights in China. Increasingly, citizens will refrain from any kind of independent or critical expression for fear that their data will be read or their movements recorded — and penalized — by the government. And that is exactly the point of the program.

Moreover, what emerges in China will not stay in China. Its repressive technologies have a pattern of diffusing to other authoritarian regimes around the world. For this reason — not to mention concern for the hundreds of millions of people in China whose meager freedom will be further diminished — democracies around the world must monitor and denounce this sinister creep toward an Orwellian world.

“The purpose of China’s international surveillance state is no different than its domestic one,” suggested Amby Conn Carroll. “Both are designed to give the communist Chinese government maximum control over the people it interacts with.”

“The Chinese government, which has built an extensive digital infrastructure and security apparatus to control dissent on its own platforms, is going to even greater lengths to extend its internet dragnet to unmask and silence those who criticize the country on Twitter, Facebook and other international social media,” warned a New York Times report published at the turn of the year.

The Atlantic’s writers are right: China’s surveillance state should scare everyone.