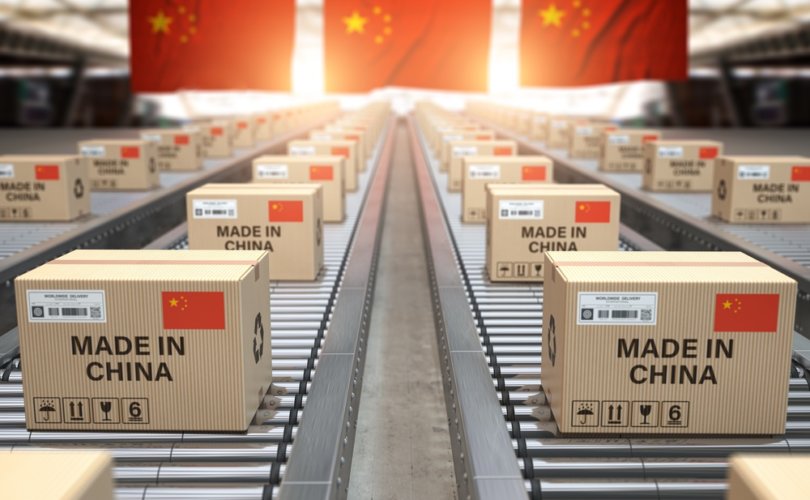 (LifeSiteNews) — China has long been a global exporter. Taking advantage of western corporate greed and a sunny but misguided optimism that a share in capitalistic profit-making would encourage a repressive nation to open up to free enterprise, China has grown over the decades into a massive and powerful supplier of products which have been shipped to nearly every corner of the world.

But over the past two years, cheap goods haven’t been the only things the Communist-controlled country has exported.

In March 2020, whether by accident or design, China unleashed a pandemic upon the world. The so-called novel coronavirus was said to have come from Wuhan, China, where, as luck would have it, there is a virology institute in which scientists have conducted experiments to artificially enhance viruses so they can more easily infect humans.

COVID-19 was, by all accounts, Made in China.

Of course, whether by accident or design, China’s global virus export was a relatively mild one. If it was intended as a biological weapon, its effects have hardly been of plague-like proportions, and that’s something to be grateful for.

But the virus itself wasn’t China’s most significant global export over the past 24 months.

As the coronavirus spread throughout the world in 2020, and statisticians began baselessly predicting apocalyptic outcomes, world leaders sprang into action.

In a move that seems inexplicable unless one allows for the possibility that it was a coordinated effort, political leaders in the free world decided to enact the same measures, mandates, restrictions, controls, and police powers employed by one of the most dictatorial and repressive regimes in the modern world.

As a global export, Chinese-style totalitarianism has proved supremely advantageous for world leaders, just as cheap Chinese products have been a boon for major corporations.

Western businesses, indeed, if obliged to pay laborers fair wages as required under the law, could hardly have sustained the wide profit margins they have achieved by outsourcing labor to a nation whose laws don’t protect the rights of employees or ensure they’re paid a living wage.

Likewise, government leaders, if obliged to respect the constitutional or charter rights and freedoms of their citizens, could hardly wield the unmitigated power they have since they began imitating the brutal, censorious, and dictatorial governance model of the Chinese Communist Party.

Prior to 2020, rational westerners looked at China’s burgeoning social credit system, government censorship, repression of protests, capricious obliteration of personal freedoms, active enterprises of torture and genocide, and its use of concentration camps, with fully justifiable horror, and were thankful their governments were different.

But in 2020 and 2021, citizens of ostensibly free, democratic nations have experienced for themselves the dehumanizing oppression of being locked down, mandated, and restricted by unaccountable big government tyrants. Of being prevented from going to church, to work, or school. Of being forbidden to travel, tracked and traced, masked, and coerced into getting an experimental drug.

The western world has followed in the boot prints of totalitarian regimes like China as government leaders and their corporate lackeys have shut down protests, censored free speech, and destroyed the lives and livelihoods of people who have spoken out or refused to comply. In Australia, people have even been removed from their homes and concentrated in camps allegedly to stop the spread of the now-endemic virus.

Moreover, with the advent of COVID vaccine passport schemes, citizens worldwide have been introduced to the infant stages of a social credit system and split into two classes: the privileged ones who comply with the government, and the dissenters who are locked out of society.

After two years of overhauling the power structures of nations built on Christendom and fundamental rights, some of the outrageous mandates and restrictions are finally being lifted. The people are finding their power and their voice, and they’re pushing back. We need to increase the pressure, and keep it up until we restore what is rightfully ours.

But meanwhile, in spite of a meaningless “diplomatic boycott” by the United States and empty admonitions against genocide and torture, the world has willingly volunteered to participate in the 2022 Winter Olympics, hosted this year in Beijing under the watchful eye of the Chinese Communist Party.

After two years of exporting its totalitarianism and human rights abuses throughout the world, China has once more received Favored Nation Status as nations that have the power to shut China down overnight have nevertheless sent their athletes to compete in what some Republicans are calling the “genocide games.”

In a just world, China would be punished for its abuses. Its supply chain would be cut off, its global influence shut down. Corporations and government leaders would refuse to fund an evil regime that has openly announced plans to knock the United States off its perch as a global leader and replace republicanism and freedom worldwide with totalitarianism and oppression.

But it’s not a just world, and none of those things are happening. Instead, we send our athletes to play in China’s games and tell them not to say anything that might make the CCP angry.

It’s unjust and ridiculous, but that doesn’t mean we need to stand for it.

While the United States government won’t properly boycott the Olympics, the American people ought to boycott it by refusing to support it, and giving their political backing only to representatives who will speak out against it.

The past two years have shown us we cannot trust the “elites,” the media, and the bureaucrats to defend our freedoms or our interests. We must do it ourselves, and by the grace of God, we will succeed.