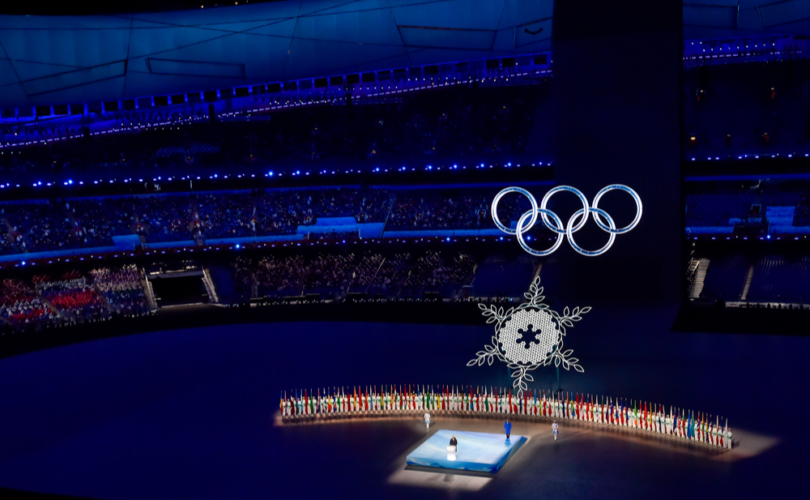 (LifeSiteNews) — Beijing was the perfect choice as the site of the 2022 Olympic Games, if you think about it. It has been two years of descent into upside-down reality and inverted morality. The media spouts lies and calls truth “misinformation.” Inclusive leftists segregate people based on their medical status.  Tolerant progressives denounce people with “unacceptable views.” Peaceful countries like Canada are now tyrannical police states. “Follow the science” means “obey and do not question.” Freedom is a mirage in a prison of “safety.” Evil is called good and good is called evil.

Then having the Olympics — a symbol of peace, friendship and goodwill between the peoples of the earth — hosted by the most brutal dictatorship and human rights abuser on earth makes perfect sense.

Even the venue was perfect. Everyone said China was showing such extravagance and rich pageantry. Really? I mean apart from the fireworks, everything you could see of the space — described as a giant “COVID bubble” of barriers and gates and plexiglass, in sparsely filled sterilized stadiums, all against a ghetto backdrop of what looked like nuclear reactors, but we were told a posh, refurbished, defunct factory worked perfectly. Perfectly hideous.

It makes sense in a global pandemic to hold the Olympics in the country in which the virus that reportedly claimed millions of lives was likely hatched in a Biosecurity Level 4 lab where Chinese researchers weaponized benign bat viruses, tagging them with potent spikes and such things. Why not? Just like appointing Anthony Fauci, the man who funded the weaponized bat coronavirus research as COVID Czar to handle the crisis he created makes perfect sense in an inverted world.

Have the world’s most abusive tyrannical government bring out a Uyghur Muslim teenager – one of the people it holds in dehumanizing concentration camps, whose women are systematically gang-raped and whose children are indoctrinated in Chinese government worship to stamp out the minority culture – open the ceremony. Have the country flip the world the finger to human rights. The upside-down world hosts a “Genocide Olympics.” Reporters tried to talk to the Uyghur teen afterward and to the Uyghur athletes that China claimed were participating in the events. The government said they were “resting.” Perfect.

China’s supposed grandiosity was really the most fun part. Whenever a tyrant goes flexing his muscles, as we in Canada have witnessed with Justin Trudeau recently, the posturing is so plain it might be hilarious – if it weren’t so ugly.

First, the state was cracking its “zero COVID” whip on the people. Twenty million were in severe lockdowns, again, in the leadup to the Games. The infection – or positive test results in any case — were raging in its maximally vaccinated population so China had rounded up thousands of citizens in the dead of night in the weeks preceding the Games to send them to live in COVID quarantine metal boxes, shipping containers furnished with a toilet and wooden bed and a hole for them to stick their head out when they were going crazy. Those who had resisted being isolated were, according to few leaked reports, not treated well.

With this state hysteria about the virus that many countries were treating as endemic, China decided that no Olympics tickets would be sold to the common people. Foreigners, except a few, would be excluded, too. Sterilized seats were reserved for the select few, as rewards for obedient ones and for diplomats and approved journalists and such. The stadiums were weirdly mostly empty then. Too bad for the sponsors. Even with potential viewers stuck at home, the tune-in audience was 43% smaller than any other recent Olympic Games. Not a lot of interest. Hopefully, it was an abject lesson for marketers: Don’t sponsor a genocidal government’s display of grandiosity. But then, it’s an upside-down world.

Next were the athletes, who got people calling the Beijing Olympics “The Crying Games.” They were healthy, obviously, but still testing positive with the Chinese tests. So what should have been one of the happiest times in their lives was, for some, a weird COVID experience of being ferried between different isolation venues and told they’d not be let out to perform.

A Polish short-track speed skater was told she was being released from isolation, only to be locked up again before her event began.

“I was sitting in the ambulance. It was 3 a.m. I was crying like crazy because I didn’t know what was going on. I did not feel safe at all,” Natalia Maliszewska said. “I cry until I have no more tears.”

Belgian Kim Meylemans, who tested positive on her arrival in Beijing but assumed she would be allowed to join her teammates in the Olympic Village after a series of negative test results three days later, was later told she would have to test negative twice a day for seven days more before she saw anyone.

There were more than 350 positive tests among athletes, visitors, and journalists forced into isolation hotels with PCR test requirements. Seasoned Australian reporter Julian Linden, who had no COVID symptoms, described in the Sydney Daily Telegraph that not a near-bombing at the Olympic Games in Atlanta in 1996 or nearly being mugged in Rio de Janeiro in 2016 had prepared him for Beijing’s quarantine measures. “The only humans I’ve seen are the two Chinese health workers who turn up at my room each day to swab my throat. Dressed in full hazmat suits and unable to speak English, they don’t say much but are friendly and helpful, even agreeing to my request for a selfie.’”

A Danish TV reporter was dragged off his live feed by a zealous Chinese security guard.

Then the real stories of Chinese extravagance started pouring in. Literally.

When Finnish skier Katri Lylynpera posted pictures of water leaking from the ceiling and down the walls of her Olympic village apartment, Chinese officials didn’t fix the problem — they ordered her to take her pictures down.

Athletes were complaining about the food, too. “My stomach hurts, I’m very pale and I have huge black circles around my eyes,” Valeria Vasnetsova, a Russian biathlete said, posting a picture of her isolation food tray on Instagram. It contained some plain pasta, some over-cooked meat, an orange sauce, a few potatoes and a dumpling of sorts.

The athlete said this had been her breakfast, lunch and dinner for five days.

Is China using quarantines to rig the Olympics?

A Russian athlete, Valeria Vasnetsova, has blown the whistle.

She says foreign athletes who test positive for covid are being starved, so they can’t compete even if they recover. 🧵 pic.twitter.com/tM79dQZEID

Germans said the same thing, asking for better conditions for the athletes. German delegation head Dirk Schimmelpfennig slammed the conditions as “unreasonable” and asked for more hygienic rooms, and more regular food deliveries so athletes who are eventually released are still fit to compete.

Was it part of a plan by China to undermine its competition? Accusations of Chinese cheating were rife. A Chinese speedskater was caught on film flicking a marker on the ice into a Canadian skater’s blade, sending her flying into the boards.

The ice-skating scandals captured the spirit of the 2022 Olympics. When Chinese American Zhu Yi, who had renounced her American citizenship to skate for China, fell and then experienced the wrath of Chinese commentators telling her to go home to the U.S.,  Chinese officials deleted 41,000 posts from Weibo, China’s Twitter equivalent, and closed 850 accounts for “creating trouble” about the Olympics. The winners of the skating medals all left in tears in any case over other troubles. Upside down world.

Beijing’s Olympics were compared with Hitler’s Olympics, celebrated openly under the Nazi flag three years before World War II began. The Nazis had hidden overt signs of antisemitism – but it was there for those who looked. A world that didn’t want to see, or quietly approved, however, allowed it, and emboldened it. Some say the Games strengthened Hitler’s resolve and led to the furnaces of Auschwitz and Dachau, to the extermination of millions.

Just miles from the Olympic Games are several of China’s detention centers for political dissidents who are tortured and emaciated, The Epoch Times reported. The Beijing Games were the perfect symbol for the world as the West dissolves into communism, health dictatorships and police states.