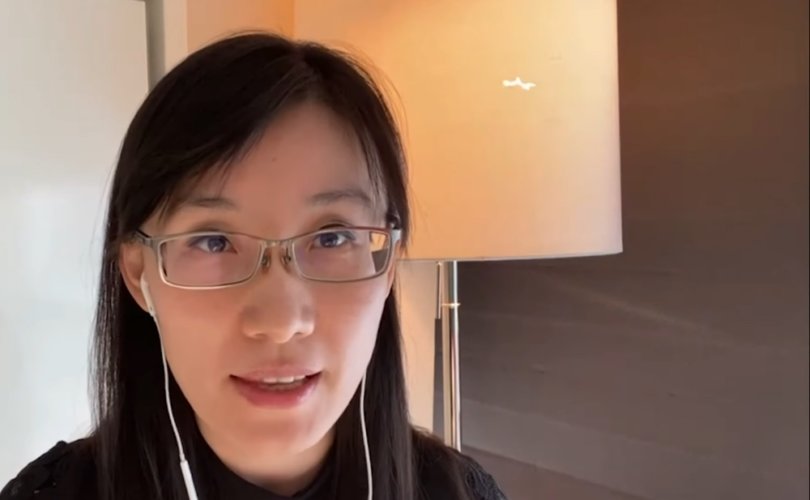 September 15, 2020 (LifeSiteNews) – The coronavirus was man-made and did not originate from a wet market in Wuhan, says a Chinese whistleblower and one of the first scientists to study COVID-19 in China.

Dr. Li-Meng Yan, 36, a medical doctor and virologist who fled to the US in April to tell the world about the origins of the virus, said that based on her own research the coronavirus “did not come from nature at all. It was created in a lab.”

Dr. Yan and her colleagues have just published a scientific paper summarizing how the “unusual features of the SARS-CoV-2 genome suggest … sophisticated laboratory modification rather than natural evolution.” In it, she lays out exactly how the deadly pathogen could have been synthesized in the P-4 lab in Wuhan.

And now various scientists from around the world are saying she may be right.

In a lengthy interview with me two weeks ago, Yan, who is in hiding and fears for her life, said that the Chinese government knew the virus was man-made and knew about the dangers of person-to-person transmission well before it became a global pandemic.

Before she defected, Yan worked at Asia’s top virology lab – the P3 Lab at the University of Hong Kong. The lab is the global center for coronavirus research where its famous “SARS hunters” cracked the code of the first SARS coronavirus outbreak in 2003.

In late December, her supervisor Dr. Leo Poon asked her to look into a cluster of SARS-like bases that had originated in Wuhan, a city of 11 million in central China. She began to communicate with a network of medical contacts throughout China, and by December 31, learned that there was human-to-human transmission of the new virus — a fact that was suppressed by the Chinese Communist Party, and later by the World Health Organization, she said.

Yan took her concerns to Poon, who repeatedly warned her to “keep silent,” she said. He told her not to criticize the CCP or contradict them on their official line on the origins of the coronavirus, which they said was spread from eating wild animals at a wet market in Wuhan. “If you do, we will get into trouble and be disappeared,” she said he told her.

For three months, Yan took his advice to heart and continued her research, She soon discovered that COVID-19 has two artificial, man-made “insertions” that make it particularly deadly to human beings. The first “insertion” allows it to spread easily from person-to-person, while the second “insertion” allows the virus to infect different kinds of tissue once it is already in the human body.

“Any scientist who has this knowledge will know that it is not from nature,” she told me.

Around the world, virologists who are studying the virus are starting to back her claims that the virus is man-made.

“The properties that we now see in the virus, we have yet to discover anywhere in nature,” said Norwegian virologist Birger Sorensen in a July 13 interview with the scientific journal Minerva.  “We know that these properties make the virus very infectious, so if it came from nature, there should also be many animals infected with this, but we have still not been able to trace the virus in nature”

“When we compare the novel coronavirus with the one that caused SARS, we see that there are altogether six inserts in this virus that stand out compared to other known SARS viruses,” said Sorensen who works for Immunor AS, a Norwegian company that researches and develops vaccines.

Nikolai Petrokvsy, the director of endocrinology at Flinders University in Adelaide, Australia, also said that the virus could be man-made.

“Our own research, which is currently under review and was based on rigorous molecular modeling, revealed some highly unexpected findings for a virus postulated to have recently crossed from animal to humans,” he told me in an interview. “From the very earliest isolates it was uniquely adapted to infect humans above other species we tested.”

An internationally renowned scientist, Prof. Joseph Tritto, who is the president of the Paris-based World Academy of Biomedical Sciences and Technologies (WABT), has also published a book describing how the China Virus was created in the lab.  I have summarized Prof. Tritto’s book here.

US researchers are being more cautious, but are not dismissing Dr. Yan's claims.

“We can't rule it out,” said Jonathan Latham, a virologist and co-founder of the Bioscience Research Project in Ithaca, NY, a non-profit that conducts scientific research. He said his team of researchers believe that the Wuhan Institute of Virology studied tissue samples from miners who were infected with the virus in 2012, but they don't know whether those samples were later manipulated in the lab. “If they go wrong, then you have a man-made virus,” he told me. He also believes that the virus “almost certainly escaped” from the lab.

Richard Ebright, a professor of chemistry and director of the Waksman Institute of Microbiology at Rutgers University in New Jersey, said that although he disagrees with Yan's theory of “insertions,” he would not rule out the possibility that the virus could have been lab-manipulated.

“It is important to note, this does not rule out the possibility the virus was laboratory constructed or laboratory-enhanced using methods that do not leave signatures,” he said.

Dr. Yan, in her new article, has convincingly rebutted the arguments of Lathan and Ebright.  She points out that both are based on a belated claim, by the now disappeared director of the P4 lab in Wuhan, Dr. Shi Zhengli, that she “found a close relative to the China Virus in nature” way back in 2012.  Dr. Shi only reported this “discovery” in January of this year after the outbreak of the pandemic, registering it under the name of coronavirus RATG-13.  Its suspiciously similar to SARS-CoV-2 and, as Dr. Yan explains in her article, a close study of its genome shows that it is a fabrication.

For her part, Yan was desperate to get the truth out in order to save lives. She knew she would have to leave China to do so, she said. “I tried to persuade my husband who worked in the same lab to come with me,” she said. “But I failed.” Yan secretly bought a plane ticket to Los Angeles and landed in the US on April 28.

She spent her first two months in the country in hiding, while being debriefed by US intelligence officials. But with cases rising dramatically around the world, she began to speak out. She gave an interview to Fox News last month.

There are nearly 30 million cases of the virus and almost a million deaths globally, according to the most recent statistics collected by Johns Hopkins University.

Why would the Chinese government create such a deadly pathogen? Was it trying to create a bioweapon or a vaccine? Yan said she doesn’t know the answer, but noted that all labs in China are under the control of the government. And in Wuhan, research into the coronavirus is under the supervision of Chen Wei, an epidemiologist who is a bioweapons expert and major general in the Chinese military, Yan said.

Adding to the concerns about China’s bioweapons program is the fact that Major General Chen Wei was just last week given an award, called “The People’s Hero,” by none other than Chinese President Xi Jinping for her work on the China Virus.

“The Wuhan lab was collecting hundreds of coronavirus from all over China,” she said. “They claimed it was to better predict future coronavirus epidemics that might emerge from nature. But if they were worried about a coronavirus epidemic, why weren’t they making any effort into vaccine research, as we were doing in our lab in Hong Kong?”

As to how the virus might have escaped from the “high containment” Wuhan lab, Yan said, “It was not an accident. No one in the lab got sick or died. There are always two people in the lab. No live virus would be able to escape.”

Yan said she doesn’t know if the escape was caused by a disgruntled employee or whether a more sinister plot involving the Chinese government was afoot.

What we do know is that the Great Chinese Cover-up continues.  Dr. Shi, who created the China Virus in her lab, has disappeared.  The Wuhan Lab itself remains off-limits to foreigners.  The Chinese Communist Party is doing everything it can to hide the origins of the virus.

Since she began speaking out last month, Yan has been fired by the University of Hong Kong which also dismissed her findings that the virus is man-made. Her husband has distanced himself from her, and her parents have publicly called her a “traitor,” she said.

“I do this because I am a scientist and I know the truth and I want to tell it to the world,” she told me.  “But if they find me, they will kill me.”