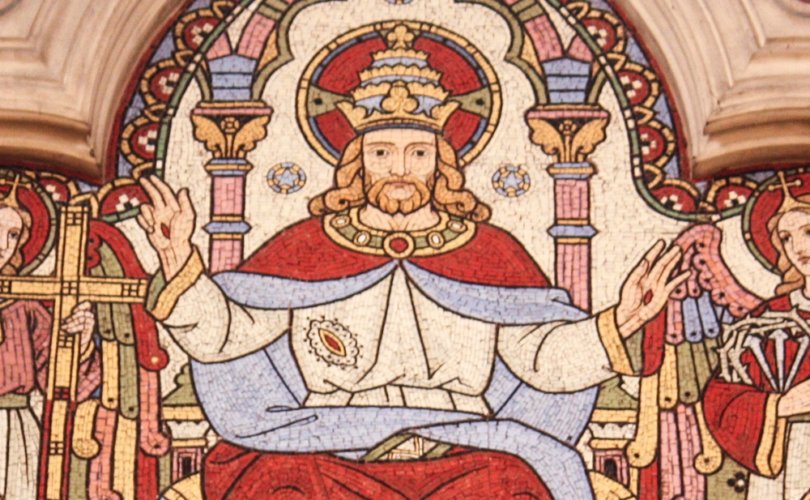 October 24, 2019 (LifeSiteNews) — In the traditional Roman Catholic calendar, Christ the King is celebrated on the last Sunday of October, not the last Sunday of the liturgical year (as in the Novus Ordo calendar). The reasons for this change, and the effects it had on the texts of the liturgy, are quite eye-opening, as I have detailed elsewhere. It is never inopportune to consider why we have this relatively recent (less than 100 year old) feast in the first place.

When Pope Pius XI established the feast of the Kingship of Our Lord Jesus Christ with his encyclical Quas Primas of December 11, 1925, the world was in a precarious condition (as it often seems to be). The evils of the First World War were still fresh in everyone’s minds, and the European political and economic situation in the mid-twenties was bleak. A pervasive worldliness had arisen, including open demands for contraception and abortion, that portended the abandonment of the natural law we have seen rapidly accelerating since the 1960s. In short, it was an age that had already turned its back on God’s law, His truth, His wisdom, His love, and His actual rulership over human hearts and societies.

One thing we must never forget: God is the King of all creation, whether we want Him to be or not; we do not get to decide by means of a Brexit-type referendum whether or not He will be King, but only whether we will submit humbly to His just and merciful reign or rebel against it to our own detriment. As Pius XI teaches, all angels and men ultimately bow before Him — whether in humble gratitude for His gift of salvation and its fruit, the beatific vision, or with an anguished rebellion against the Creator that results in eternal damnation.

Civil societies will reflect this orientation on the part of their leaders and the preponderance of their citizens: the society itself, including its government, can bow before God willingly and, even here on Earth, begin to experience a certain foretaste of salvation and happiness, or it can chafe at the yoke, sin mightily, and call down upon itself the punishment of bitterness, aridity, and compounding cruelty. In other words, heaven and hell begin here and now, on Earth, among us, depending on the choices we make, individually and socially.

Pope Pius XI unambiguously declared that the feast day he was instituting had a social dimension and demand to it. Steve Skojec has helpfully collected the relevant texts. I will limit myself here to commenting on section 24 of the encyclical.

If We ordain that the whole Catholic world shall revere Christ as King, We shall minister to the need of the present day, and at the same time provide an excellent remedy for the plague which now infects society. We refer to the plague of anticlericalism, its errors and impious activities.

With the term “anticlericalism,” Pius XI sums up the multifaceted war waged against Catholicism by modern revolutions, characterized by a ferocious and indeed demonic hatred of the clergy, celibacy, religious life, the Holy Sacrifice of the Mass, crucifixes, church buildings, parochial schools, and anything that belonged to or bore the mark of the Church. “Anticlericalism” is a fitting term for all this, because the symbol par excellence of Catholicism is the priest vested for Mass, standing at the high altar, facing East toward the Sun of Justice.

It is all the more disturbing that many at the Vatican, including Pope Francis, have aligned themselves with yesterday’s and today’s anticlericalists on so many subjects — attacking clerical attire, traditional devotions, adherence to doctrine, and the effort to keep Europe Christian, while winning praise from Freemasons, environmentalists, and global investors.

This evil spirit, as you are well aware, venerable brethren, has not come into being in one day; it has long lurked beneath the surface. The empire of Christ over all nations was rejected. The right which the Church has from Christ himself, to teach mankind, to make laws, to govern peoples in all that pertains to their eternal salvation—that right was denied. Then gradually the religion of Christ came to be likened to false religions and to be placed ignominiously on the same level with them. It was then put under the power of the State and tolerated more or less at the whim of princes and rulers. Some men went even further, and wished to set up in the place of God’s religion a natural religion consisting in some instinctive affection of the heart. There were even some nations who thought they could dispense with God, and that their religion should consist in impiety and the neglect of God.

For Pius XI, true to the teaching of his predecessors, the Church, by God’s decree, is Christ’s empire over all nations. The nations must therefore respect her unique nature and prerogatives. Catholicism cannot without injustice be placed on the same level with other religions, or be treated like a member of a “world parliament of religions,” even for seemingly noble purposes like seeking peace or human fraternity or the common good.

The interreligious gatherings in Assisi over which John Paul II and Benedict XVI presided, and the declaration that Francis signed with the grand imam in Abu Dhabi, is thus ruled out in Quas Primas as an offense against the rights of God. Moreover, the policy of an official stance of neutrality toward religion, with a total separation of Church and State, is likewise condemned. (This is not the only encyclical one could point to on all of these points — there are many others from Leo XIII; Pius IX; Pius X; Pius XI; and even Pius XII, although he gets democratically fuzzy.)

The rebellion of individuals and states against the authority of Christ has produced deplorable consequences. We lamented these in the encyclical Ubi Arcano; we lament them today: the seeds of discord sown far and wide; those bitter enmities and rivalries between nations, which still hinder so much the cause of peace; that insatiable greed which is so often hidden under a pretense of public spirit and patriotism, and gives rise to so many private quarrels; a blind and immoderate selfishness, making men seek nothing but their own comfort and advantage, and measure everything by these; no peace in the home, because men have forgotten or neglect their duty; the unity and stability of the family undermined; society, in a word, shaken to its foundations and on the way to ruin.

There is no question that Pius XI, already in 1925, is describing a secularized world, stripped of ultimate meaning and transcendent purpose. One wonders what would he say today!

Resuming his focus on the social kingship of Christ, Pius XI gently reproaches Catholics for their weak efforts, perhaps from a misplaced sense of meekness or politeness, or a fear of encountering opposition or suffering persecution:

We firmly hope, however, that the feast of the Kingship of Christ, which in future will be yearly observed, may hasten the return of society to our loving Savior. It would be the duty of Catholics to do all they can to bring about this happy result. Many of these, however, have neither the station in society nor the authority which should belong to those who bear the torch of truth. This state of things may perhaps be attributed to a certain slowness and timidity in good people, who are reluctant to engage in conflict or oppose but a weak resistance; thus the enemies of the Church become bolder in their attacks. But if the faithful were generally to understand that it behooves them ever to fight courageously under the banner of Christ their King, then, fired with apostolic zeal, they would strive to win over to their Lord those hearts that are bitter and estranged from him, and would valiantly defend His rights.

At this point, almost a century after Pius XI was writing, we can see clearly why Catholics do not enjoy high stations or much authority in civil society. Regardless of our sins of omission or commission in the past, Western democratic systems today are dominated by morally corrupt or compromised liberals (both classical liberals and “progressives”), a rogue’s gallery of the ambitious, avaricious, and salacious, who either hate Catholics passionately (as witness the democratic contenders for the U.S. presidential nomination) or are willing to use them when convenient.

In a system so ideologically inhospitable and colossally rigged, there is no chance of a wholesale Catholic or Christian “takeover” such as Pius XI might have thought still possible when he first established this great feast. Indeed, when Paul VI in 1969 changed the feast in both concept and calendrical placement, he effectively replaced Pius XI’s Thomistic incarnational integralism with a cosmic and eschatological mysticism more amenable to the Age of Aquarius. It is not merely the government that doesn’t want Christ as King; it seems to be the postconciliar Church as well.

The faithful who still revere Christ as King and understand that He deserves to reign in every heart and home, in every tribe and tongue and people and nation — and even, one may say, at the Vatican — know what can and must be done right now. We work to improve local conditions and to build Catholic “cells” within society so that, at least for a while, we might fly under the radar screen of Big Brother and bring up another generation or two in the fear and love of the Lord, preparing them either for martyrdom or for a new Christendom. We know neither the day nor the hour of Christ’s coming; this is why we have no other obligation to those who live in a hundred or a thousand years hence than to ensure, as much as lies in our power, that the Catholic Faith remains in the world for them.

We pray and we work; we work and we suffer; we hand on the Faith; and we beg the Lord to save us, to save His Church, from the unprecedented double attack of external and internal anticlericalism.