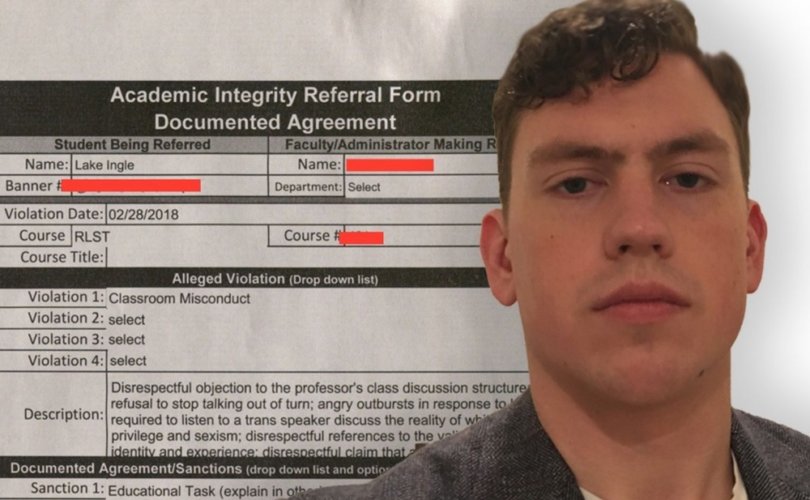 March 16, 2018 (LifeSiteNews) – If you’ve ever wondered why academics like Dr. Jordan B. Peterson are warning parents that universities are intellectually bankrupt postmodern playgrounds specializing in ideology rather than education, look no further than this story, at Indiana University of Pennsylvania. From FOX News:

A religious studies major was barred from Christianity class at Indiana University of Pennsylvania for saying during class that there are only two genders. Lake Ingle, a senior at the university, said he was silenced and punished by IUP Professor Alison Downie for questioning her during a Feb. 28 “Christianity 481: Self, Sin, and Salvation” lecture.

After showing a 15-minute TED Talk by transgender ex-pastor Paula Stone Williams discussing the “reality” of “mansplaining,” “sexism from men,” and “male privilege,” the professor asked the women in the class to share their thoughts. When no women in the class said anything, Ingle spoke up, challenging the professor on biology and the gender wage gap.

He told the class that the official view of biologists is that there are only two genders. The feminist professor booted him from class and asked him not to come back. She referred him to the public university’s Academic Integrity Board (AIB). Ingle needs to complete the class to graduate at the end of the semester. “You are barred from attending this class in accordance with the Classroom Disruption policy,” IUP Provost Timothy Moerland told Ingle in a March 2 letter.

There are a few important things to note here. First of all—these were topics for a class on Christianity? Gender ideology and the gender wage gap? Even further, the professor accused Ingle of “angry outbursts in response to being required to listen to a trans speaker discuss the reality of white male privilege and sexism” in addition to “disrespectful references to the validity of trans identity and experience” in justifying her decision to kick Ingle out of her class and demanding a written apology from him listing and repenting for all the different sins he committed in her classroom.

So in a class about “Self, Sin, and Salvation” we have, in addition to “trans identity” and the gender wage gap, a speech by a transgender person on white male privilege and mansplaining as well as the sexism apparently inherent to that group. I’m sure that these things could be discussed under the headers of “Self, Sin, and Salvation” but I’m very curious as to how Professor Downie managed to inject her pet topics into a religious studies class called Christianity 481. This does, however, give some insight into how many universities teach Christianity or religion in general: They choose people who despise traditional Christianity and are proudly irreligious. In today’s universities, only the godless can explain God.

Additionally, it is curious that Professor Downie identifies as a feminist as well as a champion of trans rights. After all, if any man can become a woman, what’s so special about women? And interestingly enough, men who want to identify as women usually use, as their evidence for the fact that they have good reason to abandon their biological sex, the very stereotypes feminists use to rage about: The desire to play with dolls or Barbies or the urge to wear pretty dresses and makeup. The first thing Bruce Jenner did after emerging as Caitlyn, after all, was to do a photo shoot in a tight dress and makeup. Gloria Steinem must be so proud. These are uncomfortable contradictions that Downie appears not to have noticed.

And that’s not even to mention the fact that Professor Downie the Feminist would find herself at odds with some of the original feminists, who fought all the fights she presumably celebrates as greats strides towards progress—Germaine Greer, for example, who once advocated hookup culture as a way to break women’s “dog-like devotion to men.” She has now been labeled a “transphobe” and faced student protests when she’s invited to speak for expressing doubt that a man who lops off his male member can accurately proclaim himself a woman. Greer, having lived an already lengthy life as a woman, also indicated her suspicion that a man who surgically transitioned into a woman would perhaps not understand the female experience (in everything from menstrual cramps to pregnancy scares), and that to include such a man under the label “woman” would render the term meaningless. Her bluntly expressed opinion triggered much howling in response.

Unfortunately, our universities are staffed with teachers just like Miz Downie—people who have arrived in academia with an ideology they seek to teach their students. Because they believe that opposition to intersectionality and gender ideology and all the rest is an indication of indwelling hatred, they respond to students who point out obvious facts (such as “there are only two genders”) by treating them as hatful people, and turfing them out of the classroom safe space. It doesn’t matter that these new ideologies (which are still evolving) make a mockery of science, Christianity, common sense, and even feminism. What matters is that the professors believe it, teach it, and sanction those who will not sign off on everything they have conjured up in their fertile imaginations.

Which is why, in a class purporting to talk about sin, the one example of wickedness Professor Downie wished to highlight the most was the willingness of a student to publicly disagree with her.